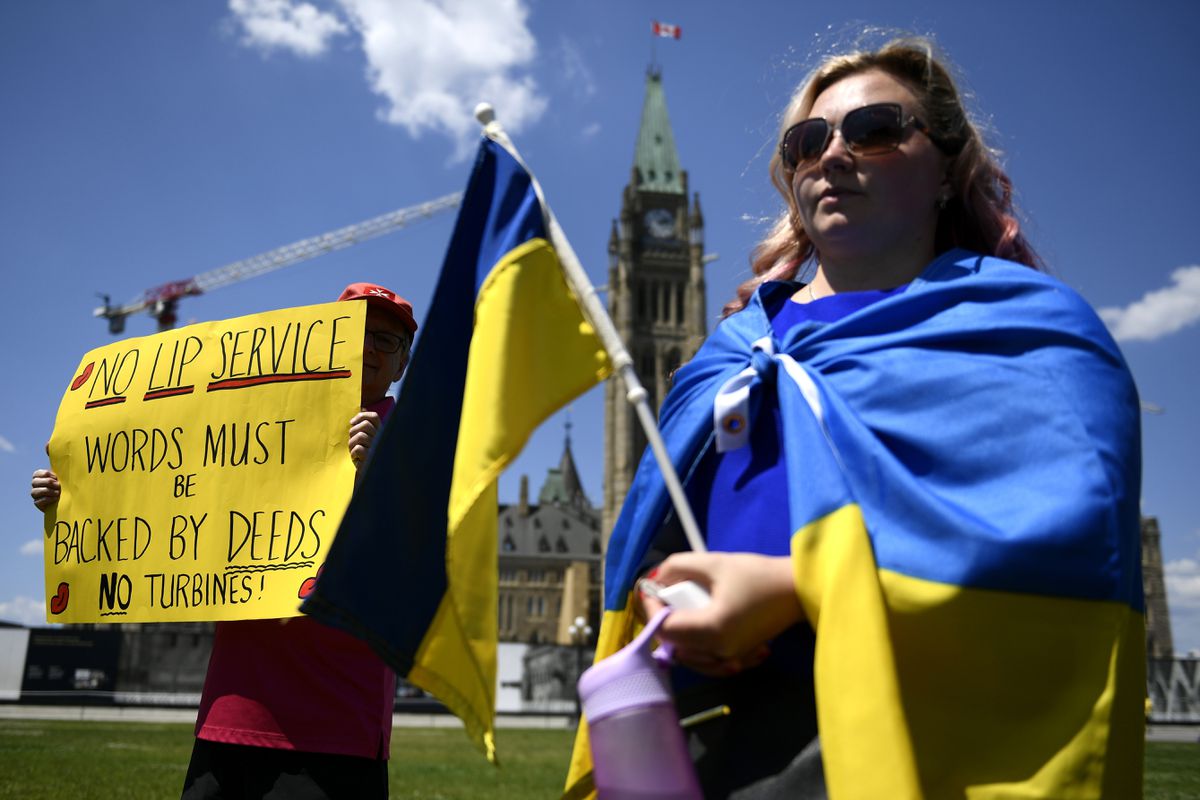 Ukrainian President Volodymyr Zelensky pleaded with Prime Minister Justin Trudeau to step up international pressure on the Kremlin after Canada evaded its own sanctions on Russia to help European allies.

In early July, the federal government announced it would release Russian-owned gas turbines stranded at a repair facility in Montreal over Canada’s sanctions against Moscow. The agreement to return the turbines also allows for the import, repair and re-export of the equipment for up to two years.

The move infuriated Kiev and the Ukrainian diaspora in Canada. At a protest on Parliament Hill on Sunday, supporters of Ukraine said that with the decision to release the turbines, the Trudeau government is now helping to fund Vladimir Putin’s war in Ukraine.

Just before the demonstration in the capital, the Prime Minister and Mr Zelensky spoke for the first time since Canada evaded a number of sanctions designed to pressure Mr Putin to end his war. Canada’s July 9 decision to grant Russia a reprieve came amid an increasing barrage of attacks that appeared to target civilians, including on universities in Mykolaiv and community buildings in Vinnytsia.

In a succinct statement posted on Twitter after his conversation with Trudeau on Sunday, Mr Zelensky said the West must do more – not less to help Ukraine.

“The international stance on sanctions should be principled,” he said, “After the terrorist attacks in Vinnytsia, Mykolaiv, Chasiv Yar, etc., the pressure should be increased, not decreased.”

Opinion: How a panicky mood in Germany forced Canada to give up Putin its turbines

His statement did not directly mention Canada’s release of the Russian turbines used in gas pipelines. Last week, Ukraine’s president called Ottawa’s decision “absolutely unacceptable,” but Mr Trudeau and Deputy Prime Minister Chrystia Freeland have defended the move, which Germany had asked for.

Since Russia launched its war against Ukraine in February, the European Union has spent the following months reconciling its opposition to the war with its need for Russian fuel. The resulting uncertainty has plunged the continent into an energy crisis, with Germany bracing for gas rationing during the winter months.

Russia last month cited the delayed return of the turbine equipment, which Germany’s Siemens Energy had maintained in Canada, as the reason behind its decision to reduce the flow of natural gas through the Nord Stream 1 pipeline. The pipeline, which runs from Russia to Germany, had a capacity of 40 percent.

Kiev has warned that the move would encourage Moscow to continue to use its ability to choke Europe’s fuel supplies as a weapon. Last week, the Ukrainian government summoned a senior Canadian diplomat to hear Kiev’s objections to Ottawa’s decision, which has also sparked parliamentary hearings.

After Sunday’s appeal, Mr. Trudeau’s office released a statement that did not mention any sanctions or refer to the release of the turbines.

The two discussed “the importance of maintaining strong unity among allies and continuing to impose serious charges on Russia in light of its illegal and unwarranted invasion of Ukraine,” Mr Trudeau’s office said.

During a conference call with reporters after a meeting of G20 finance ministers in Bali, Indonesia, on Saturday, Ms Freeland said Germany’s ability to maintain its support for Ukraine could be jeopardized if the turbines are not returned. . She said a unified G7 effort would be needed to support Ukraine, and that returning the repaired parts to Germany was the right choice. The United States has also said it supports Canada’s decision.

The Ukrainian World Congress has filed a petition with the Federal Court for a judicial review in hopes of preventing the turbines from reaching Germany. The group argues that Ottawa gave in to Russian blackmail and set a dangerous precedent that will lead to a weakening of the sanctions regime imposed on Russia.

The Ukrainian president has previously praised Canada for its support. In May, he said he couldn’t ask Mr. Trudeau any more. On Sunday, he again thanked the prime minister for sending defense aid. But as Mr Zelensky adopted a diplomatic tone in public, Ukrainian Canadians on Parliament Hill on Sunday were angry as they accused Canada of yielding to Russian pressure and failing to deliver on its promises.

The Ottawa chapter of the Ukrainian-Canadian Congress planned the protest on Parliament Hill to urge the government to withdraw the waiver. About 100 people gathered outside the House of Commons, holding signs accusing the government of “lip service” and turning its back on Ukraine.

Many at the protest still have relatives in Ukraine and said Canada’s move showed it would impose sanctions when it suits and when it costs less economically.

“It’s terrible that they didn’t behave the way they talk,” said Anastasiia Kot, a 19-year-old student at Carleton University.

Her parents are still in Ukraine and her father is fighting in the army. She said her family is “doing well, by Ukrainian standards. … All my relatives and friends are still alive.”

With reports by Robert Fife, Steven Chase and The Canadian Press

For Subscribers: Get exclusive political news and analysis by signing up for the Political briefing.