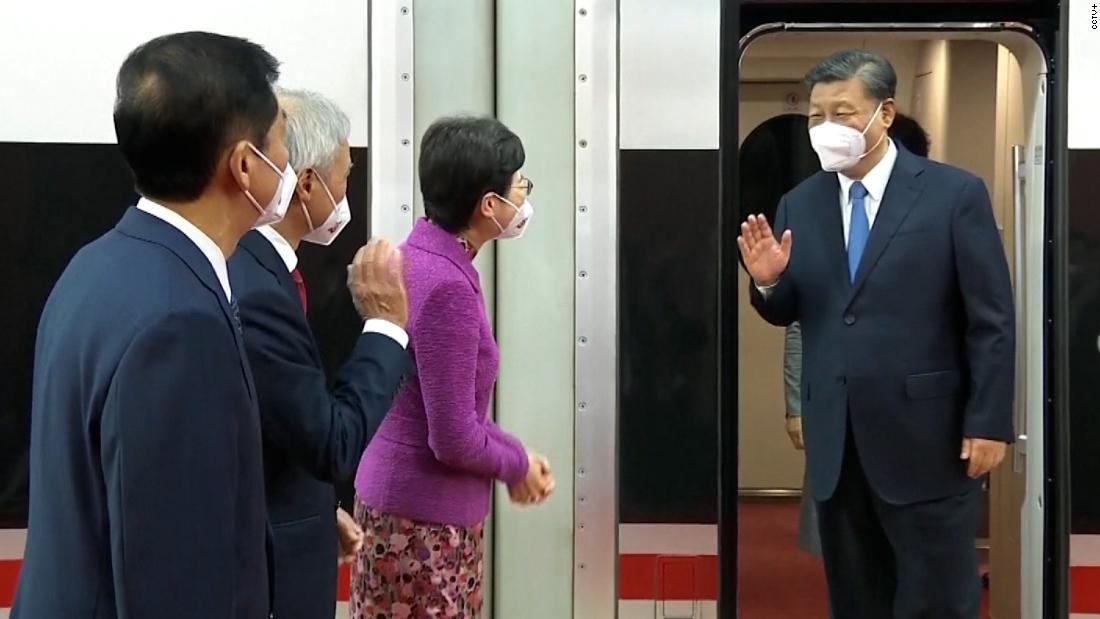 Xi is expected to spend two days in the financial center and attend a series of official events to mark both the July 1 transfer and inauguration ceremony of Beijing’s next-appointed leader, John Lee, a former police officer and security chief.

In the nearly 900 days since Xi last left the mainland on January 17, 2020, his diplomatic activities have been limited to virtual summits and video conferencing, lending special meaning to his trip to Hong Kong.

Xi arrived in the city on Thursday afternoon, via a high-speed train from the Chinese border city of Shenzhen, where he was met by a large crowd who waved national flags and chanted in unison: “Welcome, welcome, a warm welcome.”

He was then led down a red carpet as colorful lion dancers performed, adding to the noise of drumming, singing and trumpeting.

Xi was first greeted by the outgoing Hong Kong Chief Executive, Carrie Lam, and her top officials. After exchanging a few words, Xi and his delegation slowly made their way through the station, waving to the crowd and chatting with other officials present.

“It has been more than five years since my last visit to Hong Kong. For the past five years I have paid a lot of attention to and care about Hong Kong,” Xi said in a short speech afterwards.

Xi’s arrival coincides with forecasts of a typhoon bringing heavy winds and rain, and comes after weeks of uncertainty as to whether he would risk exiting mainland China’s strict zero-covid bubble to head to a city that now reports more than 1,000 new Covid cases per day.
Under Xi, China is isolated from the world in pursuit of a zero-tolerance approach to the virus, with the country’s international borders closed and travel strictly restricted.
Xi reaffirmed the policy on Wednesday during a symbolic visit to Wuhan, the central Chinese city where the virus first emerged in late 2019, saying he would rather “sacrifice a little economic growth temporarily” than “harm people’s health,” he said. the state news. Xinhua agency.

“When we calculate the total costs and benefits, our Covid policy is the most economical and effective,” Xi said, adding that China had the opportunity to continue its zero-Covid approach “until the final victory”.

While Hong Kong has been heavily impacted by Beijing’s uncompromising health policies, implementation of strict quarantine and border controls, and enforced social distancing measures, it has so far avoided the kind of lengthy citywide lockdowns or mandatory mass testing seen in cities across the globe. mainland, such as such as Shanghai and Xi’an.

Ahead of Xi’s visit, Hong Kong has imposed a series of Covid restrictions. As of last week, top officials are banned from attending public events and are only allowed to use private vehicles for commuting. They have also been tested daily for Covid and must spend Thursday night in a quarantine hotel for Friday’s handover ceremony.

Arriving in a changed city

The last time Xi visited Hong Kong to celebrate the handover was in 2017, for the 20th anniversary, when he encountered streets full of pro-democracy protesters.

But no protests are expected this year. Most pro-democracy groups in Hong Kong have disbanded after the city’s sweeping national security law came into effect two years ago.

In a subsequent crackdown, nearly all leading pro-democracy figures in Hong Kong, including activists and politicians, were imprisoned or forced into exile.

The remaining organizations have not applied for permits to hold peaceful protests during Xi’s journey, according to police. The League of Social Democrats, one of the few remaining pro-democracy political parties, said it would not organize protests after several members met with national security police.

The Hong Kong government has repeatedly defended the national security law, saying it has restored order in the city, which was rocked by pro-democracy, anti-government protests in 2019.

Taking no chances, the police have stepped up security and closed areas near key locations. Pedestrian bridges, highways and a train station in some of Hong Kong’s busiest areas will be temporarily closed on Thursday and Friday.

A no-fly zone has also been imposed in the city’s port, restricting the use of drones during Xi’s visit.

Authorities have also severely restricted media access to the handover celebrations, in contrast to the open reporting environment and freewheeling local press of recent years.

According to the Hong Kong Journalists Association (HKJA), applications from at least 10 journalists working for local and international organizations were rejected on “security grounds”.

“Since the media is unable to send journalists to the scene, the HKJA deeply regrets the rigid reporting arrangements the authorities have put in place for such a major event,” the press group said on Tuesday.