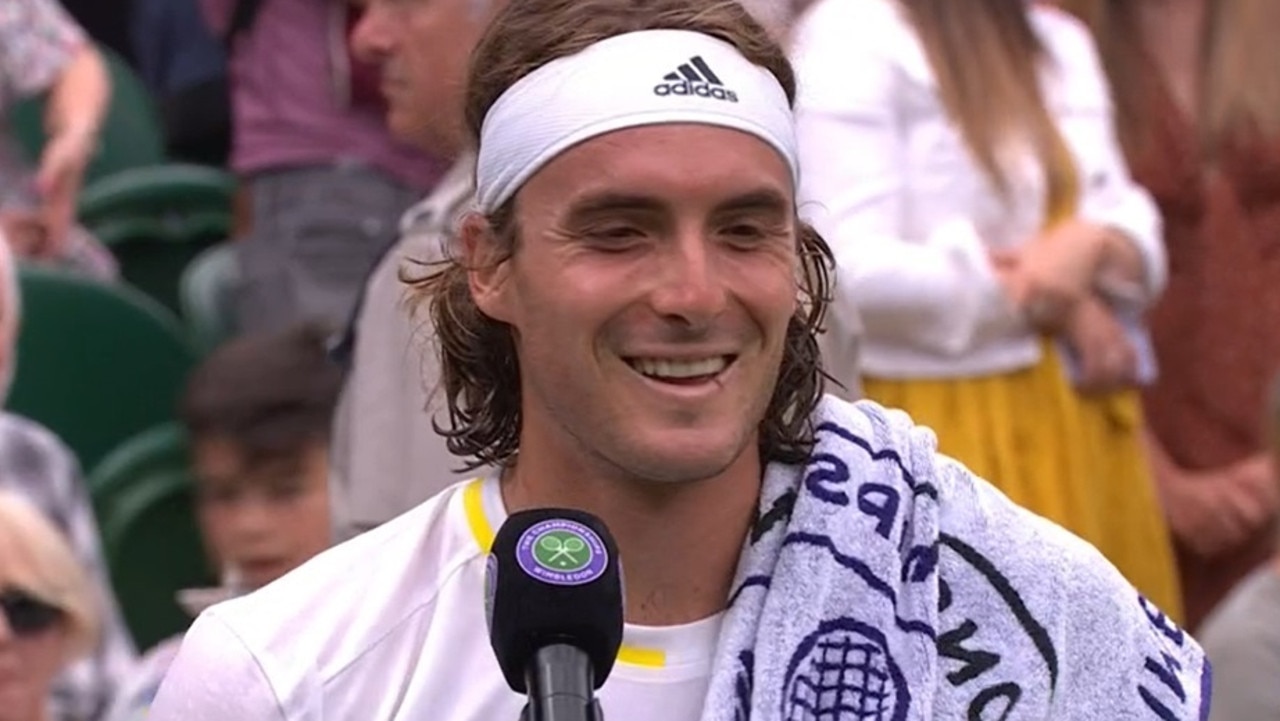 Stefanos Tsitsipas only needed four words to sum up Nick Kyrgios’ biggest problem, as the Aussie told everyone how important he is.

Fourth seed Stefanos Tsitsipas set up a blockbuster Wimbledon third round clash against Nick Kyrgios – and took a cunning count to his next opponent after taking his latest win.

Tsitsipas defeated Australia’s Jordan Thompson 6-2, 6-3, 7-5 to reach the last 32 in the All England Club for the second time.

Kyrgios previously took an impressive 6-2, 6-3, 6-1 victory over Serbian 26th seed Filip Krajinovic to reach the last 32 for the sixth time in London.

Kyrgios leads Tsitsipas 3-1 in their head-to-head record, including a win on grass in Halle earlier this month.

During his on-court interview, Tsitsipas ended up with a brutal four-word sleigh for Kyrgios and his fighting skills.

“I feel like everyone here knows who Nick is,” Tsitsipas said. “We played a lot of great games against each other.

“I respect him for his game and the way he fights…when he wants to.”

Tsitsipas pulled his tongue out of his cheek as he answered more questions about Kyrgios during his post-match press conference.

“Nick has more matches than me on this field. He claims to like grass and I think his game is good for the grass,” Tsitsipas said.

“I am absolutely thrilled to face him. I have a lot of respect for him on the pitch, what he’s trying to do, although he’s been a bit controversial.

“I think he’s playing good tennis. I’m going to focus on doing my thing and pay attention to my own game from start to finish.

“Hopefully I can stay there and do something great, have a great competitive game against him.”

Tsitsipas’ comments came as Kyrgios launched an attack on the media for “despising” him after his win over Krajinovic, declaring that he is “one of the most important people in the sport”.

“I didn’t want to remind people that I’m good; I know I’m good,” Kyrgios said. “I just feel like sometimes people don’t give me the respect because of other things I do.”

In other matches, Rafael Nadal was again forced to dig deep to reach the third round of Wimbledon as the top women’s top women’s Iga Swiatek survived a stumbling block to win her 37th match on the spin.

Nadal has also benefited from a shocking first-round exit for Felix Auger-Aliassime, the sixth seed from Canada, who took him to five sets at the French Open.

Nadal looked comfortable against Berankis in the opening two sets, but was broken in his first service game of the third set and was unable to bounce back.

But the Spaniard regrouped and raced to a 3-0 lead in the fourth set before a sharp rainstorm forced the roof.

When play resumed, he advanced to victory and fired a 13th ace to seal the win. The 22-time Grand Slam champion, who has not played at Wimbledon since reaching the semi-finals in 2019, admitted he needed to step up his game.

“I haven’t played much on grass in three years,” he said. “It gives me the chance to continue, I’m very happy about that.

“I have to improve. The fourth set was much better… I have to keep working, be humble, even when things don’t go well.”

Swiatek was in trouble early on before winning four games in a row and taking the first set, but got a break in the second and was unable to recover.

But in the end, Swiatek took the decision, broke a 3-1 lead and closed the game.

“I’d say the grass is pretty tricky for me, I’m not going to lie,” Swiatek said. “You can see that I may not play as efficiently as on other surfaces.

“My confidence is generally improving. But this tournament is tough and I’m still figuring out how to play the best game here.”

British wildcard Katie Boulter shocked 2021 finalist Karolina Pliskova 3-6, 7-6 (7/4), 6-4 before dedicating her win to her late grandmother, who died this week.

“I’m probably going to get emotional,” she said. “My grandmother passed away two days ago, so I want to dedicate that to her today.”

Fourth seed for women, Paula Badosa, set up a clash against two-time champion Petra Kvitova after they both had uncomplicated victories.