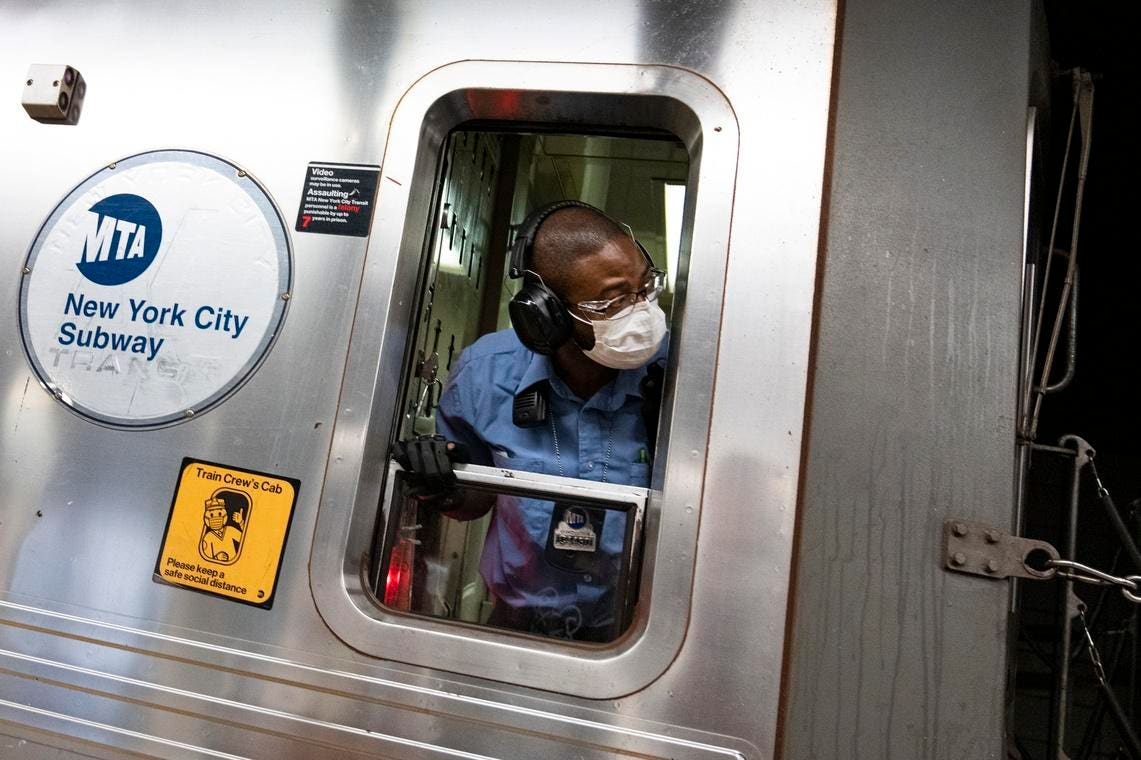 And here’s a tweet from the MTA showing off their second image:

In this case, MTA stands for ‘Metropolitan Transportation Authority’ and not for ‘most disturbing ad’. But what exactly was the MTA trying to say with this new image? It showed what appeared to be four faces: one wearing a facemask properly, a second clearly wearing a facemask the wrong way and sticking out the nose, the third also wearing a facemask that didn’t expose the mouth properly, and a fourth who didn’t even wear a face mask. But while these were clearly four different situations, the image had the word “Yes” under the first, second, and fourth face and the words “You do you” under the third face.

uh, what are you doing? After seeing this new image, a number of people, including scientists, public health and medical professionals, and science communication experts reacted on social media with the equivalent of “they did what?” Lucky Tran, PhD, an organizer of the March for Science and a science communicator at Columbia University, tweeted the following:

Yes, the new MTA graphic seemed to suggest that it makes no difference whether you wear a face mask over your nose, over your mouth, or both, which simply isn’t the case. This could send the message that even if you wear face masks, you don’t even have to wear them properly, as science journalist Shawn Radcliffe tweeted:

This would be like saying that wearing pants is encouraged, but it doesn’t matter if you wear the pants on your head, your hands, or your lower body.

As you can see, the earlier MTA image clearly placed the words “No” under the exposed face, “Not quite” under the face with the mouth exposed, “Try again” under the face with the nose exposed, and “That is the only “under the only face that properly wears a face mask. And such previous descriptions were much more scientific. After all, which one would you prefer if someone next to you were infected with the severe acute respiratory syndrome coronavirus 2 (SARS-CoV-2) and spits out virus-laden air droplets from his or her mouth and nose Would you rather have that person cover their mouth and nose or not? If you answered no, is that your last answer or do you want to call a friend? What did you think of a friend of a public health scientist?

The whole concept of “things leak out a lot less quickly when there’s a lid” isn’t a new concept. How would you react if you asked a barista for a cover for your latte and got the answer, “It just doesn’t matter, cover or no cover. It’s not clear why the MTA would release an image that essentially contradicts and possibly parodies the rationale behind the previous face mask requirements. It’s not like the MTA can behave like what’s in the TV show. has happened Dallas and declare that all his previous directives are all just a dream.

Speaking of parodies, Eric Feigl-Ding, PhD, an epidemiologist and head of the COVID Risk Task Force at the New England Complex Systems Institute, shared some real parodies of the new MTA image on Twitter. The first time the MTA image was pooped (and peed) falsely suggested that the four people were equal:

The second parody image featured the word “yes” only under the first face wearing the face mask properly and then a little extra sauce under the other three:

As you can see, the second face with the nose sticking out over the top of the face mask had these words on the right side: “Really? I mean it’s been over two years, you can’t honestly put your mask on like that. to wear?”

The third face with the mouth open was accompanied by: “No, seriously. Most five-year-olds even know this is wrong.”

And finally, the fourth face without a mask had next to it: “Thank you for putting your selfish entitlement and lack of empathy for the lives of the disabled and immunocompromised.”

Speaking of which, the Center for Independence of the Disabled, NY (CIDNY) expressed their disagreement with lifting the requirements for face masks on public transportation in a statement shared on Twitter:

CIDNY stressed that not needing face masks puts people at higher risk for more serious Covid-19 outcomes, such as people with disabilities and those with weaker immune systems. Their statement also said that “images showing masks worn incorrectly can be dangerous. We’re glad masks are encouraged, but we don’t need encouragement. We need security.”

Again, it’s not clear who came up with the new MTA graphic and what purpose it will serve. Why did such an image have to be accompanied by the lifting of the requirements for face masks? There is already enough evidence that face masks work. To suggest in any way that it makes no difference whether you wear a face mask or wear it properly is inconsistent with scientific evidence. In addition, it will be all the more difficult to reintroduce the requirements for face masks everywhere if they are ever needed again in the future, like oh maybe next winter if Covid-19 rears its head again.