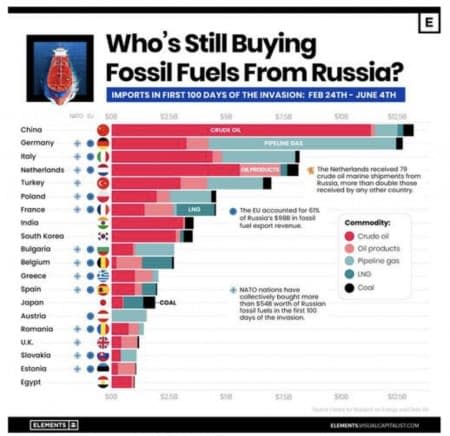 Despite impending sanctions and import bans, Russia exported $97.7 billion of fossil fuels in the first 100 days since the invasion of Ukraine, averaging $977 million per day.

So, which fossil fuels are exported by Russia and who imports these fuels?

The infographic below, via Niccolo Conte and Govind Bhutada of Visual Capitalist, tracks the largest importers of Russia’s fossil fuel exports during the first 100 days of the war based on data from the Center for Research on Energy and Clean Air (CREA) .

In demand: the black gold of Russia

The gradual decline in upstream oil and gas investment, followed by pandemic-induced production cuts, led to a decline in supply, as people consumed more energy as economies reopened and winters turned colder. As a result, demand for fossil fuels increased even before the Russian invasion of Ukraine, exacerbating the market shock.

Russia is the third largest producer and second largest exporter of crude oil. In the 100 days since the invasion, oil was by far Russia’s most valuable export of fossil fuels $48 billion or about half of the total export earnings.

While Russian crude oil is transported on tankers, a network of pipelines transports Russian gas to Europe. In fact, Russia is responsible for: 41% of all natural gas imports to the EU, and some countries depend almost exclusively on Russian gas. Of the $25 billion exported in pipeline gas, 85% went to the EU.

The EU bloc was good for 61% of Russia’s fossil fuel export earnings over the 100-day period.

Germany, Italy and the Netherlands – members of both the EU and NATO – were among the largest importers, surpassing only China.

The biggest increase in imports came from India, buy 18% of all Russian oil exports during the 100-day period. A significant portion of the oil going to India is re-exported as refined products to the US and Europe, which are trying to gain independence from Russian imports.

In response to the invasion of Ukraine, several countries have cracked down on Russia through sanctions on exports, including fossil fuels.

The US and Sweden have completely banned Russian fossil fuel imports, with monthly import volumes falling 100% and 99% respectively in May compared to when the invasion began.

Globally, monthly import volumes of fossil fuels from Russia fell 15% in May, an indication of negative political sentiment surrounding the country.

It’s also worth noting that several European countries, including some of the largest importers during the 100-day period, cut back on Russian fossil fuels. In addition to the EU’s collective decision to reduce dependence on Russia, some countries have also refused the country’s ruble payment scheme, which has led to a drop in imports.

The import restriction is likely to continue. The EU recently adopted a sixth sanctions package against Russia, imposing a complete ban on all Russian maritime crude oil products. The prohibition, which relates to 90% of the EU’s oil imports from Russia is likely to realize its full impact after a six to eight month period allowing for the execution of existing contracts.

As the EU phases out Russian oil, several European countries are heavily dependent on Russian gas. A full-fledged boycott of Russia’s fossil fuels would also harm the European economy – so the phase-out is likely to be gradual and subject to the changing geopolitical environment.

Read this article on OilPrice.com