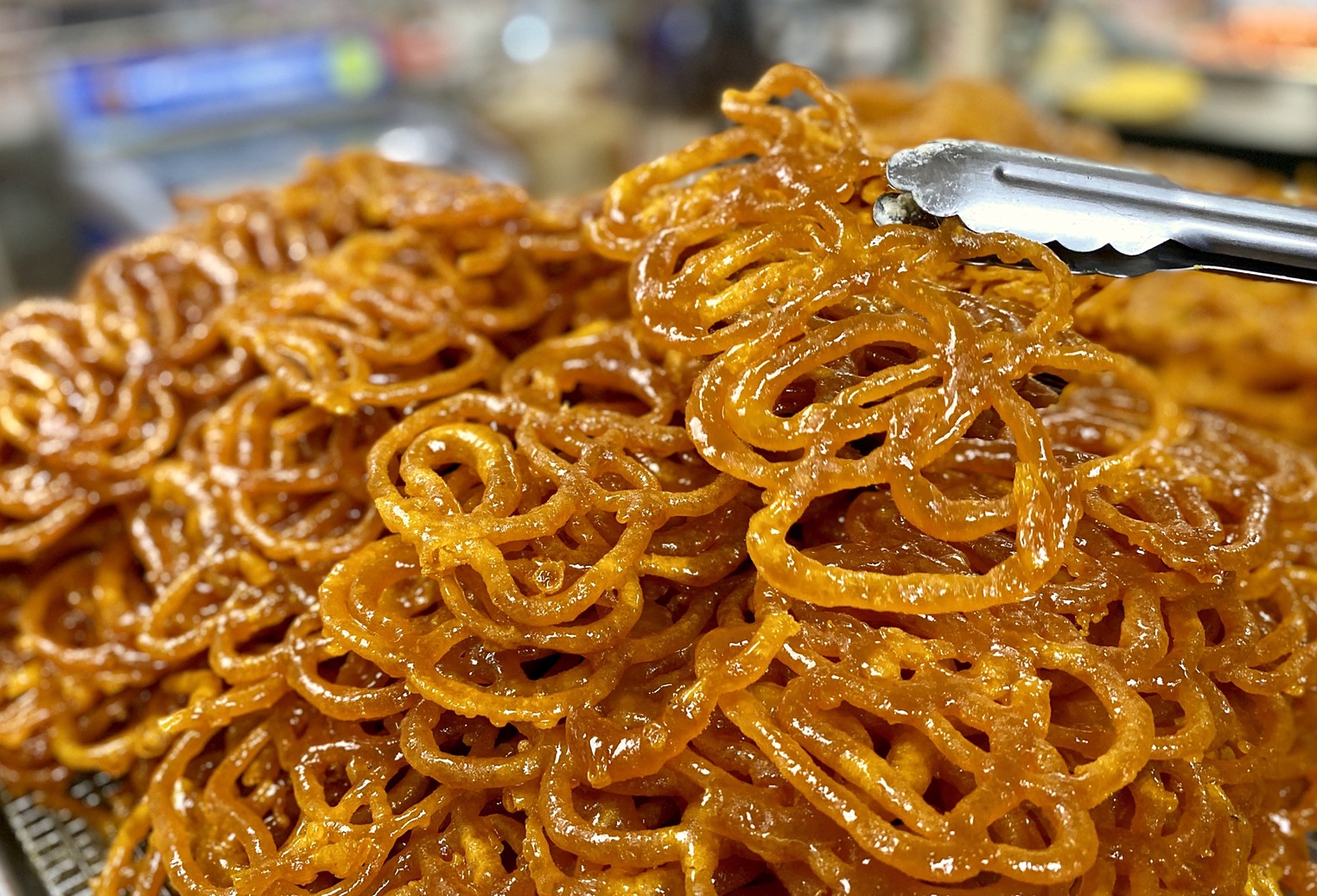 Move over Halloween, there’s another candy-filled party on the fall calendar. Known as the festival of lights, Diwali is one of the biggest holidays celebrated in India every year. The holiday is an important aspect of Hinduism, but it is celebrated by many religions around the world. It symbolizes the triumph of light over darkness, good over evil and hope over despair.

Diwali celebrations last for five days, with the last day being the most important. This year it falls on Monday 24 October. In preparation, Indian restaurants in metro Phoenix are ramping up production of their sweet treats to meet demand. One of the sweetest of all is jalebi. Diwali festivities include the lighting of sparklers.

Davinder Singh owns New India Bazaar & Cuisine on Seventh Street north of downtown Phoenix. He first fell in love with jalebi, sweet spirals of dough fried and soaked in sugar syrup, as a boy growing up in northern India. At the age of 13 he moved to the US with his family and in 2006 he opened his Indian market, restaurant and sweet shop with his father and son.

But it wasn’t until 2009 that Singh started making and selling the sticky and sweet South Asian snack. At the time, he couldn’t find anyone in Arizona to make jalebis, Singh says, and he wanted to bring a taste of his homeland to Phoenix. So he did.

He returned to Hoshiarpur, a city in northern India known for its sweets, and spent a month learning not only how to make jalebi, but also how to make ‘stunning jalebi’, as his son Brum Singh puts it.

That’s the short answer. He also adds baking soda to the naturally fermented dough to keep the batter nice and airy. He found the perfect oil and syrup temperature so that the dough rises and stays crisp. And then there’s his batter twirling technique. No two jalebis are alike, but it takes a quick hand and a lot of practice to pipe the dough into the hot oil so that the swirling line holds its shape and comes out golden and consistent. Singh’s motichoor ladoo is made with green cardamom and melon seeds and fried in ghee.

New India Bazaar serves all sorts of delicious Indian delicacies, or mithai — colorful, decorative, melt-in-your-mouth delights like ladoo, jamun, balushahi, and barfi — but Singh’s jalebis takes the cake. They are made fresh daily and every day he sells 50-100 pounds of the beloved candy to both customers and wholesale accounts. That extends to over 300 pounds during Diwali.

“You probably see every second customer buying them,” Singh says.

Come by and see for yourself. During Diwali, a tent will be set up outside the New India Bazaar, where Singh will make the festival favorite, which he sells by the pound. Inside, the shop transforms into a candy buffet, with customers filling mithai boxes with bite-sized treats to eat, share and gift to family and friends. The crunchy Indian treat is bursting with sweetness.

Here are five restaurants and markets to find the sweet treat in metro Phoenix.

Specializing in Punjabi dishes such as tandoori chicken and naan, the Dhaba sells jalebi on weekends.

This place in Tempe is known for its sweets, samosas and chaat or Indian snacks. Little India is also largely vegetarian.

Sweet Magic is a casual counter service place that serves South Indian food and has a mithai case full of sweets.