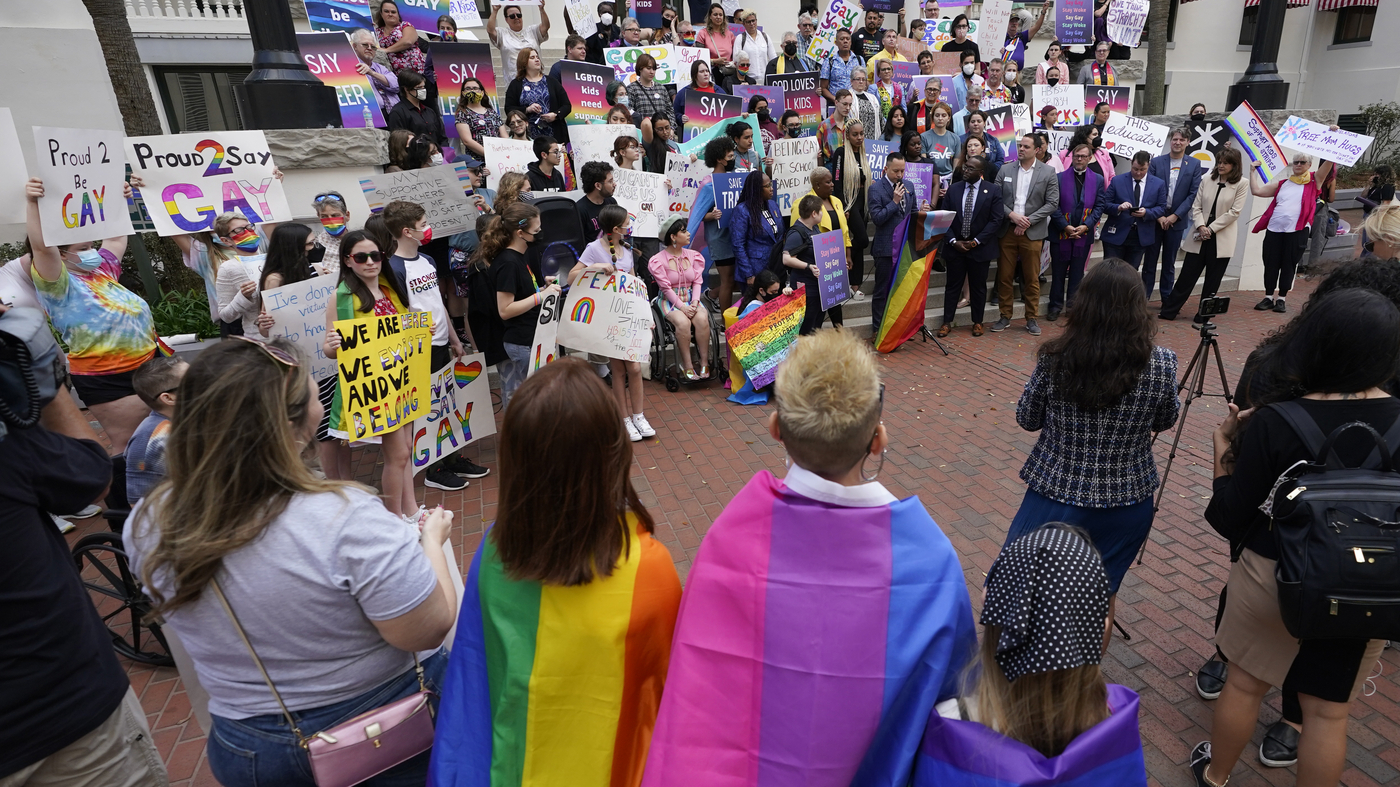 Protesters gather on the steps of the Florida Historic Capitol Museum in front of the Florida State Capitol in Tallahassee, Florida, in March to protest what opponents are calling the “Don’t Say Gay” law.

Protesters gather on the steps of the Florida Historic Capitol Museum in front of the Florida State Capitol in Tallahassee, Florida, in March to protest what opponents are calling the “Don’t Say Gay” law.

House Republicans have passed legislation that some critics describe as a national “Don’t Say Gay” law — inspired by the controversial Florida law that prohibits instruction on gender identity and sexual orientation in kindergarten through third-grade classes.

If the federal law were to become law, which is unlikely in current Congress, its effects could be much more profound, affecting not only education in schools, but also events and literature on each federally funded institution.

Here’s what’s in the bill – and what people are saying about it.

The language of the bill is broad and consistent

The measure was introduced Tuesday by Rep. Mike Johnson, R-La., and co-sponsored by 32 other Republicans.

“The Democratic Party and their cultural allies are on a misguided crusade to immerse young children in sexual imagery and radical gender ideology,” Johnson said in a statement, calling the bill “common sense.”

The bill, dubbed the “Stop the Sexualization of Children Act,” aims to “prohibit the use of federal funds to develop, implement, facilitate, or fund sexually oriented programs, events, or literature for children under the age of 10. and for other purposes.”

The language in the proposed legislation lumps together topics such as sexual orientation and gender identity with sexual content such as pornography and stripping.

It would prohibit federal funds from being used to support “sexually oriented” programs, events, and literature; federal facilities prohibit organizing or promoting such events or literature; and enable parents and guardians to sue government officials, agencies and private entities if a child under the age of 10 is “exposed” to such material.

The bill complains that some school districts have implemented sexual programs for children under 10, and that “[m]all newly implemented sex education curricula stimulate discussion of sexuality, sexual orientation, transgenderism and gender ideology as early as kindergarten.” It also evokes events such as drag queen story hours in libraries, which it describes as “sexually oriented”.

Rep. Mike Johnson, R-La., speaks at a press conference in the US Capitol Building in June. Johnson introduced legislation this week that would ban the use of federal funds for “sexually oriented” programs or literature for children under 10.

Rep. Mike Johnson, R-La., speaks at a press conference in the US Capitol Building in June. Johnson introduced legislation this week that would ban the use of federal funds for “sexually oriented” programs or literature for children under 10.

The proposed federal measure is framed in terms of parental rights, a rallying cry from the right that in recent years has sparked battles against schools’ COVID-19 vaccine requirements and staunch activism against critical race theory in classrooms.

In March, Florida Governor Ron DeSantis signed the “Parent Rights in Education” law, which prohibits public school personnel from teaching sexual orientation or gender identity in “kindergarten through grade 3 or any manner which is not age-related”. appropriate or developmentally appropriate for students in accordance with state standards.”

Critics of the measure called the Florida law “Don’t Say Gay” and claim it aims to marginalize LGBTQ people and their families. A cascade of other states quickly enacted similar legislation, and Alabama passed its own version of the bill into law.

Under the proposed legislation’s definition of the “sexually oriented material” it would restrict, it includes the description and depiction of sexual acts and “lewd or lascivious depiction or description” of human genitalia.

But it also bans a full range of topics related to the LGBTQ community — “gender identity, gender dysphoria, transgenderism, sexual orientation” — that are largely about identity.

The bill would not pass in current Congress, as such legislation is solely a Republican effort and Democrats have a functional majority in every chamber.

Depending on the November election results, the composition of the House and Senate may shift. Still, it’s not clear how much Republicans would support the bill, even if it’s popular among a particular branch of the party.

Even if the proposed legislation were passed in a Republican-controlled House and Senate, President Biden would veto it. So don’t expect this bill to go anywhere, at least for a while.

LGBTQ groups condemn the bill and warn of its potential consequences

The Human Rights Campaign, which champions the rights of LGBTQ people, rejected the proposed legislation.

“Extremist House Republicans like Mike Johnson continue their assault on the ability of LGBTQ+ Americans to live their lives openly and honestly. A federal ‘Don’t Say Gay or Trans’ bill… is their latest brutal attempt to harm the community. stigmatize and marginalize them. , not in an effort to solve real problems, but only to inflame their extremist base,” David Stacy, director of Human Rights Campaign Government Affairs, said in a statement.

Activist Erin Reed, who follows anti-transgender legislation, argues that comparing it to a “Don’t Say Gay” bill minimizes the potential effects of this proposed legislation.

“Don’t Say Gay/Trans was focused on ‘classroom instruction’, which was bad enough,” she wrote on Twitter. “This goes WAY beyond the classroom and WAY beyond ‘instruction’.”