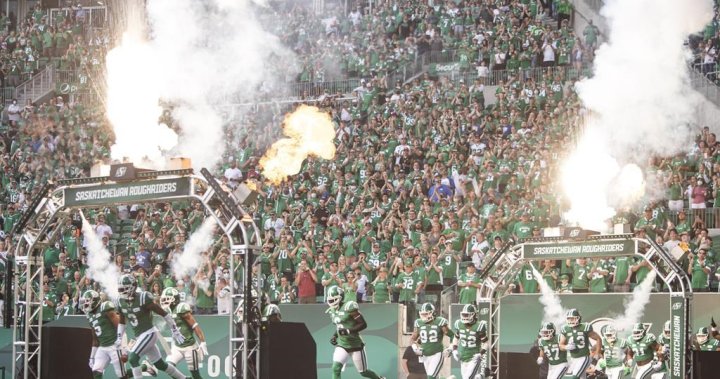 It’s a perfect time to be a football fan in Saskatchewan as CFL, U Sports and CJFL are all heading to Mosaic Stadium this weekend.

The inaugural “Football Weekend in Saskatchewan” was announced as a collaboration between the Saskatchewan Roughriders, the Regina Thunder and the University of Regina Rams.

The event opens Friday-evening when the Roughriders face the Edmonton Elks and try to improve their record to 7-7 after losing consecutive games to the Winnipeg Blue Bombers.

‘I have some father power’: Roughriders’ Fajardo ready for first game as a father

Next on the football-filled schedule is the Regina Thunder game at 1 p.m. Saturday. The Thunder remain undefeated this season, taking on their provincial rivals, the Saskatoon Hilltops.

The Hilltops will look to come out on top this week after losing 29-21 in overtime to the Thunder on September 10.

And the football at Mosaic doesn’t stop there. At 7pm, the University of Regina Rams will compete against the University of Saskatchewan Huskies in the U Prairie Challenge. The Rams and Huskies both come into the game with 2-0 records.

“Especially because I was a Regina kid who decided to go north to Saskatoon, it was always a special game on the schedule,” said Riders offensive lineman Evan Johnson. “Playing against my home team and we loved bringing it to them as best we could.”

The rivalry is one that has dominated Saskatchewan in recent history. Dating back to the 2013 season, the Huskies have won 10 of their 12 encounters with the Rams.

“It’s pretty hostile. I remember when I was playing there were pre-game fights and always some jaws going back and forth,” Roughriders receiver Mitchell Picton recalls of his time playing for the Rams. “It was a nasty rivalry and always an exciting game to play in, hopefully the boys are ready.”

In between the Thunder and Rams game, Confederation Park will hold a U of R Alumni tailgate party from 4:00 PM to 6:45 PM

The event will feature games, food, giveaways and a performance by singer and rapper Roy Wood$ on the Original 16 stage.

Saskatchewan Roughriders Mitchell Picton and Dan Clark will be available to sign autographs during the event. A performance by country artist Justin LaBrash is expected during halftime.

Ticket bundles for the inaugural football weekend in Saskatchewan can be found on Ticketmaster. Single match tickets are also available.