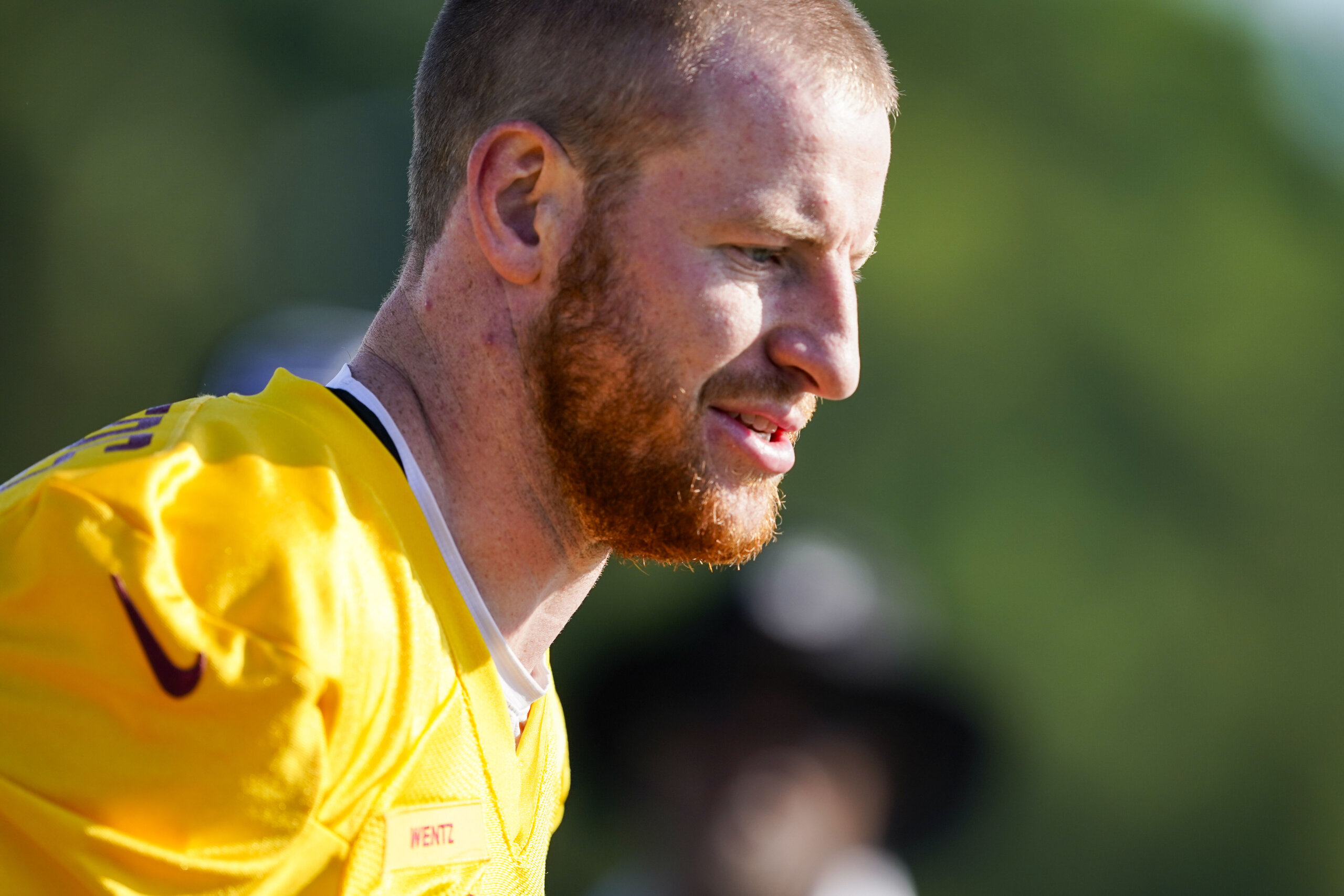 All eyes, including those of WTOP’s George Wallace, were on Carson Wentz on the first day of Commanders Training Camp.

On Wednesday, Carson Wentz began training camp in his third city in as many years. The veteran quarterback hopes he has found a home in Washington, a place he says he feels wanted.

“It builds confidence in myself,” Wentz said after his first day at training camp. “When I hear it from someone else, from the head coach, things like that definitely instill even more confidence to just go out there and not put any pressure on it, don’t set expectations.”

Given that Wentz was traded during the previous two offseasons, Rivera said he made it a point to welcome him when he arrived at the facility on Tuesday.

“I just wanted to reiterate, more than anything, that he was wanted here,” Rivera said. “That was one of the first things I told him when he entered the building. When I shook his hand, when he came through that door, I said, “Hey! You were wanted here.’”

It was rewarding enough for Wentz to enter Washington training camp in what will be his seventh season.

“Just that realization… was cool,” he said. “Just a surreal thing, every year. You’ll get goosebumps again if you think you grew up wanting to play this game – and you’re still playing it.”

After watching first practice with his new quarterback, Rivera said he was pleased with what he saw carry over from the spring.

“He’s hyper. He’s excited. He really is,” Rivera said. “Really happy with his retention, the way he handles the huddles, breaks the huddles.”

Wentz says his main focus early in camp is to “find the timing and chemistry with the guys.” That was also the main focus of workouts in California earlier this month.

Terry McLaurin led a group of receivers heading west to work with Wentz and backup Quarterback Taylor Heinicke to start that process. Something Wentz said was helpful on AND off the field.

“Going out to dinner with each guy, going to breakfast, lunch — getting to know each guy,” Wentz said it was an opportunity for the group to share “where we’re from, what we like.” Especially since the “boys are in different seasons of life”.

“I have two children and [am] married and [there are] many singles,” he added. “There’s just a different kind of atmosphere. To get together and build a relationship… it was a lot of fun.”

What did he learn about his teammates?

“Terry loves golf now, I’ve learned, which I am,” he said. “Jahan Dotson does nothing but play video games.”

Rivera said he immediately noticed the chemistry between Wentz and McLaurin on the field.

“It was pretty cool to watch,” Rivera said. “He threw one out, Terry went out and grabbed it. And then… he kind of threw up behind Terry and, you know, I think to myself, ‘Wow, he missed it.’

But then Terry came up to him and said to him, “Hey, I got out of that too early.” So there it is. You can see that they are already communicating with each other.”

McLaurin is just one of the weapons that Carson has.

This attack has a chance to be quite good and gain some points. The two most important factors in it will be Wentz’s play, and whether the revamped line of attack can protect him. The game makers are here.

As for the general practice on Wednesday, Ron Rivera wasn’t too happy with the effort.

“We need to practice better than we did today,” he said.

The only injury concern on the first day was that Antonio Gibson, driving back, was working in the sidefield. During the OTAs in the spring, Gibson had injured his hamstring and the team is choosing to be careful.

“It’s okay, but we’re going to step it up,” Rivera said. “We’re not going to throw him out right away and make something happen. We want to make sure nothing gets stuck. I almost called that an abundance of caution.”