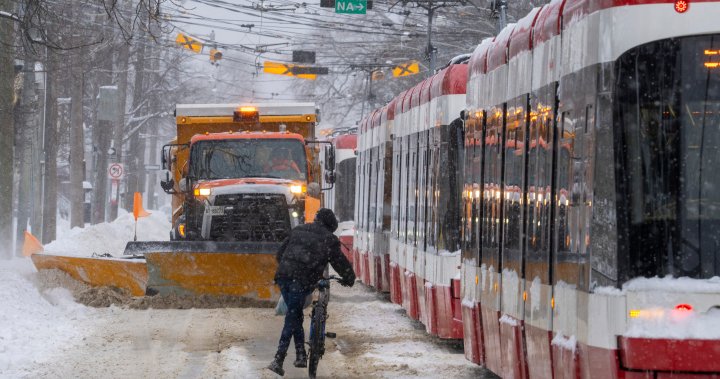 It may be the last thing you want to think about, but Toronto’s streets will have to be cleared of snow sooner or later and the addition of an unusual plow plow has caught many off guard, while others are sounding the alarm.

As part of a new city maintenance scheme starting in November, contractors will plow, sand and sprinkle the streets of Toronto with approximately 1,100 vehicles. Among them, 33 plow blades will be mounted on cement trucks.

Toronto’s Transportation Service Director of Operations and Maintenance, Vincent Sferrazza, said that aside from the odd appearance, the use of the trucks isn’t that outlandish. The three-axle vehicles, he said, are no different from what the city has used on roads in recent winters.

Sferrazza said the cement truck plows will only be used on arterial roads, such as Kingston and Avenue roads, or Steeles Avenue, which is typical of larger vehicles during city operations in previous winters.

The number of three-axle trucks on Toronto’s roads will also increase this winter, from 13 last season to 73.

The revelation that cement trucks will be used to make the streets safer has caught many by surprise, including city councillors, as staff did not specify that the trucks would be included when the council discussed the new maintenance contract.

Jessica Spieker, of Friends and Families for Safe Streets, said the change was especially troubling because of the city’s many pedestrian deaths involving cement trucks. “Victims have a terrible way of being sucked under the rear wheels and crushed, which is not survivable,” she said. The poor visibility of the big trucks coupled with the lack of side rails, she said, makes them increasingly treacherous.

She said she hoped the city would consider additional security measures to prevent unnecessary deaths this winter.

“Putting movers or coming up with a little extra cash to have a spotter in the passenger seat — that’s easy, that’s totally doable, and it comes down to political will,” Spieker said.

Councilor Josh Matlow also expressed concern about the addition of the cement trucks, noting “the disproportionate number on our city’s streets in recent years.”

Matlow voted against the winter maintenance contact, he said, due to a lack of details, saying staff should have informed councilors that the trucks had been used. “It is irresponsible to add more during snow storms when our roads are already dangerous,” he said in a statement to Global News.

But Mayor John Tory’s office said he doesn’t share the same concerns about security. Spokesperson Lawvin Hadisi said in a statement that “city officials have confirmed (cement trucks are) an accepted practice in other North American jurisdictions, including New Jersey.”

“Mayor Tory expects city officials to take all possible security measures for all vehicles in the fleet. If additional safety measures are needed in addition to those already applied to all major snow throwers, they will be implemented,” Hadisi said.

1:44
Day in the Life of a Toronto Snowplow Operator

Sferrazza confirmed to Global News that additional safety measures, such as mirrors to reduce blind spots, will be added to the trucks, and the city will maintain an ongoing dialogue with its contractors to keep the vehicles safe.

The city also said the fleet must comply with signage and visibility requirements for winter maintenance vehicles. That includes flashing beacons, checkerboards mounted to the rear of the vehicle, and flags at the ends of the plows.