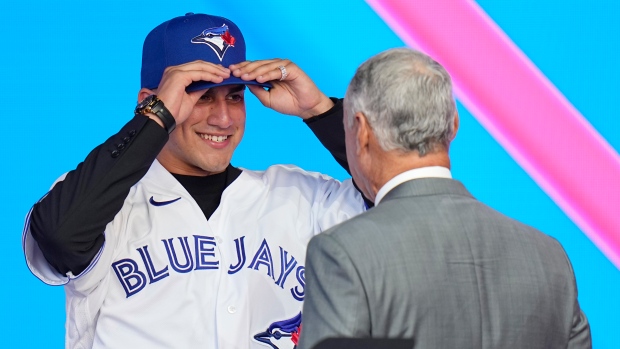 The six-foot-two, 180-pound Barriera is a left-handed pitcher who plays varsity ball at American Heritage School in Plantation, Fla. Barriera regularly hits 96 miles per hour on the radar gun and has been up to 98-99. It features an electric four-pitch mix — fastball, changeup, curveball, and slider. He is determined to attend Vanderbilt.

“He’s the best pitcher we’ve ever had here,” American Heritage head coach Mike Macey said of Barriera. “I’m not even going out to say that. I think that’s pretty obvious.

“He’s the only pitcher we’ve ever had that you would consider a first-round guy. He’s got the most hype around him.”

With their second pick, and 60th overall, the Blue Jays took 21-year-old Josh Kasevich of Palo Alto, California, a six-foot short stop at the University of Oregon Ducks, who is also one of the top hitters and defenders with the Waterloo Bucks in the Northwoods League.

Scouts say Kasevich’s arm is above average and accurate, but as a runner he needs to work on his speed.

Jackson Holliday and Druw Jones, sons of MLB All-Stars Matt and Andruw, were taken by Baltimore and Arizona with the top two picks in the amateur game.

Holliday, whose father is a former batting champion, was surprisingly chosen over Jones by Baltimore.

“A tough decision,” said Orioles general manager Mike Elias. “I would compare it to deciding what to order at a five-star restaurant.”

The Blue Jays will make two additional selections tonight, with the number 77 and number 78. The draft continues on Monday with rounds 3-10 and concludes on Tuesday with rounds 11-20.