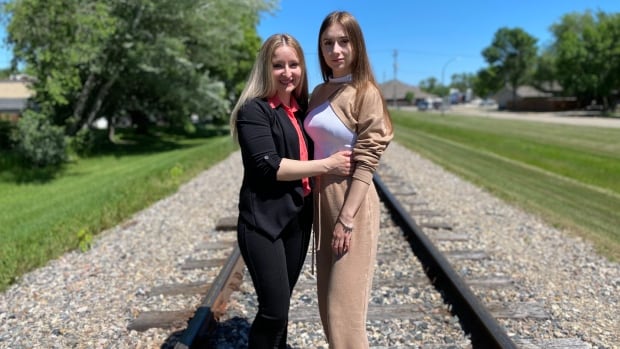 Karina Havina is working hard to learn English – the first step towards her dream of starting a manicure business and becoming a Canadian citizen.

“My name is Karina and I’m happy to be here,” she writes, then reads in English.

Havina, 22, is one of dozens of Ukrainians who fled the war and now live in Altona, a small community in southern Manitoba.

She is one of the newcomers who wants to remind locals how lucky they are to live in Canada — even though others say Canadians need to recognize the history of abuses involving indigenous peoples and other ethnic groups.

She left Ukraine three weeks after the war started in February, reluctantly leaving behind her 19-year-old brother and mother.

Havina stayed in Poland for several months before her emergency travel authorization was approved. She arrived in Canada on May 10 and now lives with her aunt, Nelli Voloshanavskiy.

“She was really scared the day that… [the war started] … especially when the plane starts flying around the city,” said Voloshanavskiy, who translated questions and answers for Havina in a recent interview.

“They feel like they might just bomb them all and everyone will die. So she thought it would be better… to get to safety.”

Havina is slowly adjusting to the peace and quiet of the farming community, her aunt said, “but of course she still worries about her mother and her family… [She] said, ‘I don’t know if I’ll see her again, if I’ll see him again.'”

Voloshanavskiy is also a relative newcomer. She started a new life in Altona five years ago and is now helping others do the same.

She said she is grateful for the opportunity and the welcome she has received.

“When I saw some families like this, they had more problems than I did, so I feel like I really want to help them. I really want to give them a chance to start their lives in a better way,” she said.

That’s why she volunteers with another Altona resident, Callum Morrison, who helps resettle refugees.

One of his duties is to organize the donation depot in the Altona Mall, where local residents drop off furniture, mattresses, dishes and bedding – some of the things that go to homes are outfitted for the newcomers.

Many residents of the city of about 4,300 have Mennonite ancestors who also fled what is now Ukraine, fleeing war and persecution, so “they always do what they can to help,” Morrison said.

The influx of newcomers is also breaking some stereotypes of rural Mennonite communities, he said.

“Sometimes people here will think, we may be narrow-minded, we may not be open to change.

“But really, it goes to show that even in these small places, Canada isn’t just one thing. We’re a lot of different people and… we come together to support those who need it.”

Altona may not be the destination many newbies have in mind, but it has one thing most are looking for: jobs.

The printing press is always running at Friesens, one of Canada’s largest book printers and one of Altona’s largest employers.

One-third of the 600 employees were not born in Canada. The company has a lot of work and a career development process for Ukrainian refugees who are now arriving, said Odia Reimer, vice president of people and culture at Friesens.

“We’re looking for people who want to work,” she says.

Friesens will provide them with lodging, telephone and internet access, and help them get their Manitoba health card and social security number, Reimer said.

Newcomers also work with a business and community mentor.

“We’ve set them up in all sorts of ways to make sure they have success when they land in Altona,” Reimer said, adding that the goal is to make them feel like part of a family.

“It’s really nice to see how people are doing well and how they find a home here.”

Must see Canada ‘through the eyes of all people’

According to Ray Loewen, the organization’s founder, Altona residents and businesses have sponsored about 300 refugees from war-torn countries through the nonprofit group Build a Village over the past 15 years.

“They come from Congo, from Sudan, from Syria, Iraq, Venezuela, Colombia,” said Loewen, whose group is helping refugee families in the area.

“It has greatly improved the community.”

The newcomers have broadened the community’s worldview and given them a new perspective on their home in Canada — a perspective that sometimes contrasts with the reality in this country, he said.

“Every time we talk to newcomers about their experiences, it’s impossible for us to imagine the horrors they had to endure as a result of war or other things they had to deal with,” Loewen said.

“When we first see Canada through the eyes of a refugee family, we see a country that is mostly peaceful, mostly safe and a great place to live.”

However, it’s also hard to imagine the horrors the Indigenous people in Canada have been and are subjected to, Loewen said, pointing to residential schools and the recent discoveries of believed to be unmarked graves in many places.

“For Canada to truly be a great nation for everyone, we need to see ourselves and our country through the eyes of all people,” he said.

Karina Havina, 22, fled the Russian invasion of Ukraine and now lives in Altona, a small Mennonite community in southern Manitoba.

For now, Karina Havina is looking forward to some Canada Day fireworks — something that has been banned in Ukraine since Russia invaded the Crimean peninsula in 2014.

“She says she is very happy to be here,” Voloshanavskiy said. “She is grateful to everyone who has helped her to be here now.”