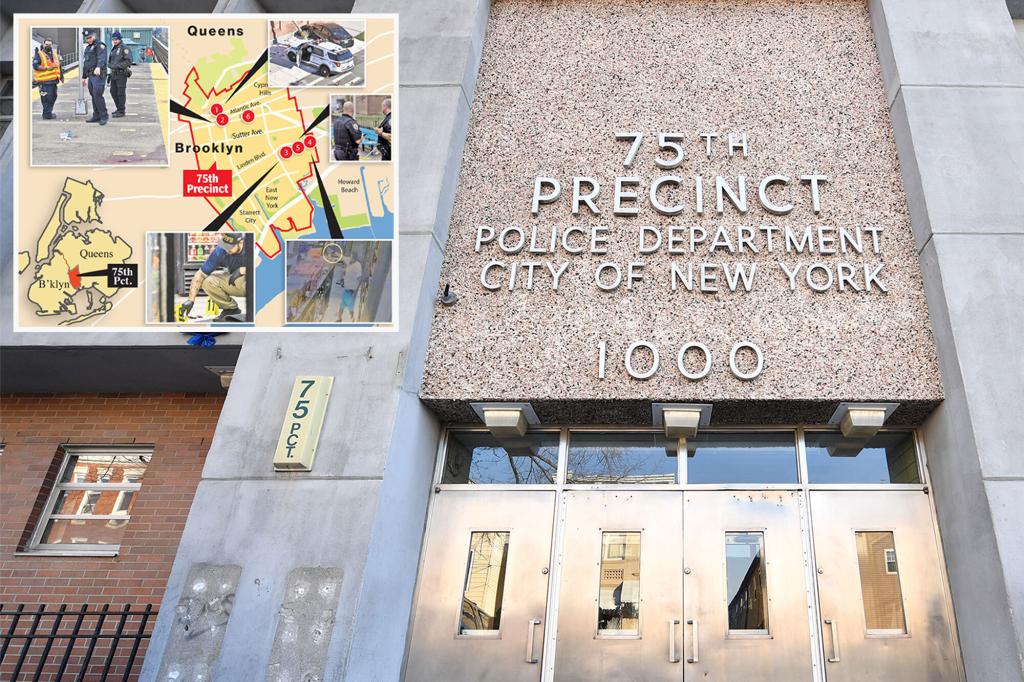 It was once known as New York’s “Killing Ground” — and amid a wave of Big Apple crime, Brooklyn’s 75th Precinct has once again made the dubious distinction of being the city’s bloodiest.

The 5.5-mile area, which spans eastern New York and Cypress Hills, has recorded the most shootings so far this year — with 48 shootings resulting in 56 casualties, according to NYPD records.

The 75th is the scene of so many gun battles that even experienced officers can’t tell which part is the most dangerous.

“Asking for the worst block in the 75th is like asking for the best pizza in New York — you have too many to choose from,” said an NYPD source.

The district was the rotten core of the Big Apple in the late 1980s and early 1990s, with a front-page story in The Post calling it the city’s “KILLING GROUND” in May 1993, when every 63 hours a murder occurred.

And bullets are flying over the 75th again this year, with shooting incidents up 26.3% through Sunday, compared to the same period last year.

In an even more ominous sign since the onset of the summer heat, admissions have doubled in the past 28 days — a 100% increase — compared to 2021.

Residents are outraged at the massacre – blaming soft-on-crime pulse.

“It’s what the people wanted,” said a Bodega Tree Food Market worker who gave his name to Abraham.

“They wanted to punish the police, so now there is no police around. What do you expect?”

The violence targeted both criminals with weapons and innocent bystanders.

A recent victim of a stray bullet fired in the neighborhood was Georgette Outlaw, 74, who was hit in the abdomen around 6:30 p.m. on July 17 as she sat quietly on a bench outside her home in the Pink Houses public housing complex.

Outlaw will remain in the hospital, her daughter said from behind their apartment door on Wednesday, adding only, “She’s doing fine.”

No one has been arrested yet.

Canarsie resident Dyran Sloan, who regularly stops by the Pink Houses to visit his mother-in-law, said he regularly played the card game ‘spades’ with Outlaw, who is known as ‘Joyce’.

“She is an older person and walks with a walker.”

Sloan complained that criminals “have more powerful weapons out here” than the NYPD, adding, “They don’t carry f–king .22s anymore. They carry M-16s.”

Sloan said the situation made him plan to move to Virginia.

At the Tree Food Market — near where a 36-year-old man survived when he was shot in the neck and abdomen on March 13 — Abraham said everyone was so aware of the danger that some encouraged him to arm himself.

“I have people, random people from the street who come in and offer me weapons,” he said.

“They say, ‘For your protection.'”

A 74-year-old woman who lives in the area repeated Abraham’s call for more police.

“I don’t believe in this ban on the police,” said the woman, who called her name Cheryl.

“That’s a lot of nonsense, because we need the police. We need them.”

Police found three guns amid the massacre and arrested Malachi Kirkland, 19, who is charged with murder and related crimes.

Jones then began strangling Simon, who managed to grab Jones’ gun and kill him in what authorities considered a case of self-defense.

“It’s really bad,” said a man who lives across the street and called his name “Yum Yum.”

“There are too many shootings in a row. Too many young people are dying.”

Despite its infamous reputation, last year the 75th district was eclipsed in total by the adjacent 73rd district, which brought in 79 admissions, compared to 71 in the 75th.

One such incident in the 75th District occurred during a walking gunfight that took place in broad daylight on Feb. 26 near 475 Riverdale Ave.

Surveillance video on NYPD Crime Stoppers Twitter page shows two men firing multiple rounds to each other as one chases the other across the street and block at about 9:50 AM

A backyard party at 264 Essex St. 264 was the scene of multiple shootings on June 11 when gunmen showed up and opened fire around 11:30 p.m.

Police said two of the victims had criminal records and an unidentified 16-year-old boy was arrested in the shooting.

On Feb. 9, officers found Modassar Khandakar, 36, fatally shot in the face outside his Forbell Street home at around 12:49 PM.

Khandakar was lying next to his 2009 Honda CRV, the door of which was open, and a single 9mm casing was found on the sidewalk nearby, but the murder remains unsolved.

Nurse Mizy Rahman, 20, said he has lived his entire life in the area, which is home to a large Bangladeshi population and most homes have security gates covering the doors and windows.

Rahman noted that there were “much worse” areas nearby and said he didn’t go out after dark.

“The ones that actually shoot don’t catch them.”

At the Redwood Senior Living complex, a 70-year-old man told a similar story, saying, “You can hardly walk at night anymore.”

“There’s no respect for the law in this town anymore,” he said angrily.

The man, who declined to give his name, added: “You don’t know who you will find on the street.”

“They can rob you for free, and they won’t just rob you, they’ll kill you, so it’s better to be home,” he said.

“People used to live with the windows open. Now that is not possible.”