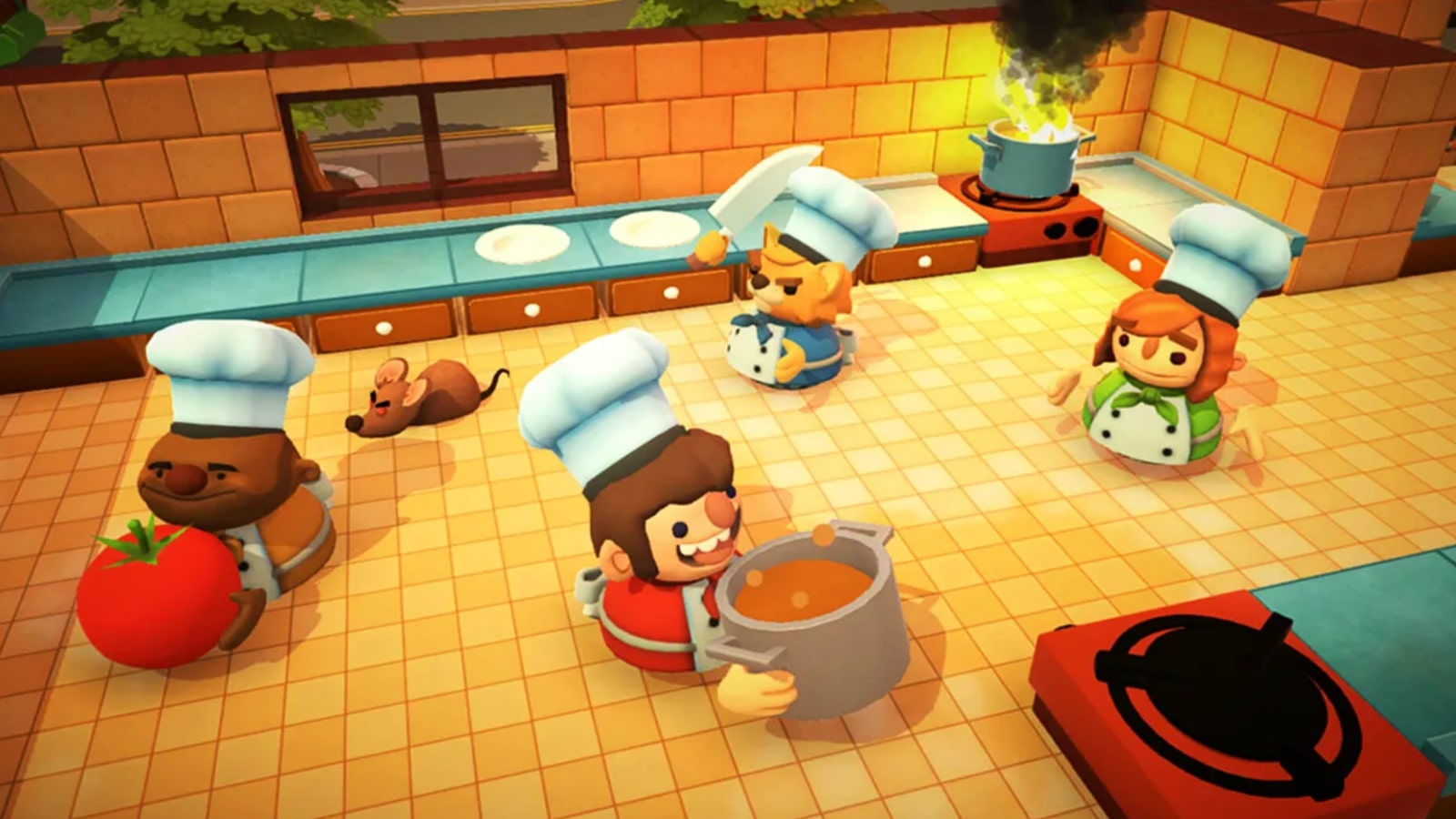 Cooking games are all over the game space, with simulator and mini-game experiences scattered across the console, mobile, and PC spaces. However, what are the best cooking games that you should try? We have a list here.

Video games and cooking seem to go hand in hand, with countless mobile titles and larger console and PC releases managing to incorporate some element of cooking. Cooking mechanics are used in almost every RPG title as a way to help players restore their health.

However, some games don’t simply put cooking on the back burner, but instead have it the whole premise and purpose of the game. In real life, cooking is a fun hobby for many. A way to unwind and relax after a long day at work or better yet, a way to experiment and get the creative juices flowing. For others, cooking can be a chaotic and sometimes stressful experience.

Overcooked is a great multiplayer experience, but will likely get chaotic very quickly

When the first Overcooked game was released in 2016, it was an instant hit, largely because of the sheer chaos the game encouraged. Online videos of friends and families playing the game helped elevate the game to what is now a very popular series.

What makes Overcooked a classic cooking game is the multiplayer elements it relies on. Although you can play the game single player, the real Overcooked experience comes to the fore when two or more people are busy in the kitchen.

The game requires players to create a variety of dishes. From simple orders such as soup to burgers, fish and chips and so much more. The game does a great job of making each level’s settings mirror the menu, with a great soundtrack that also adds to both the hilarity and the energy of the game. This is the kind of game that can lead to some bickering and fighting, so be sure to choose wisely for your fellow cooks.

Cooking Mama was a main title for the Nintendo DS

It’s rare to find a Nintendo DS user who doesn’t own at least one Cooking Mama game and for good reason. Cooking Mama works like a series of mini-games, involving chopping, frying and other cooking steps to then make one big dish.

Once the cooking is complete, the dishes served are judged on a scale of bronze, silver and gold medals. Anyone who grew up with Cooking Mama knows the dangers of getting a near-perfect dish or better yet, competing with friends to see who can make the better meal.

While the series’ popularity isn’t quite what it was in the mid-2000s, new titles are still being created. The latest entry, Cooking Mama: Cookstar, was released on Playstation 4 in March 2021. This is also the first Cooking Mama to get a non-Nintendo console release.

Imagine Happy Cooking is a classic cooking game for kids

While Cooking Mama was of course the big cooking hit of the Nintendo DS, the Imagine game franchise released a cooking game that was great and often slept by title.

In the game, players take control of a young girl named Lisa who is taught how to prepare various dishes so that she can surprise her father when he comes home from his travels. One night an angel appears from the sky and what follows is a cute little kitchen partnership between the angel and Lisa.

Players who have to chop, fry, stir and cook the ingredients, as well as scoop and garnish their food. The game also featured a lot of fun mini-games that really rounded out what cooking from home can look like when making a three-course meal.

One of the newer titles on this list, Good Pizza, Great Pizza is a 2019 game that, in its own words, aims to become the greatest pizza simulation game of all time. It’s a solid cooking game, and one that pizza lovers and cooking fans alike should give red a try.

While there are of course many pizza cooking games in the world, Good Pizza, Great Pizza is unique in its design and visual presence. The visuals sum up a traditional and rustic pizza experience, something the game really leans towards. It’s not chaotic or a visual masterpiece, but it’s simple and relaxing.

In terms of the actual cooking mechanics, the game itself is an authentic pizza making experience and really recreates the process of pizza making and cooking from start to finish.

Cook, serve, delicious! is a cooking simulator, one that contains all the elements of a conventional cooking title, but with an added realism and attention to detail that is rare in most cooking games.

Two more Cook, Serve, Delicious games have been developed since the first title. So for all fans of the original, there are two more experiences at your disposal and ready to sink your teeth into.

While it is realistic and offers a game cooking experience like no other, it does lead to a great deal of chaos. Like all good cooking games, the freedom to serve any dish and design can lead to ridiculous looking food, but hey, that’s part of the fun.

Sushi Go Round started out as a small free-to-play game on Miniclip. While it may not be known to everyone, those who have played the game love it.

The premise for the title is simple. Players are responsible for running a Sushi restaurant. The game has seven levels that mean every day of the week. Every day you have to make the dish that customers ask for, while also stocking the ingredients and ordering everything you need when the items run out.

To complete each level, players need to earn enough money. Every day the amount required increases, as does the number of customers and the variety of sushi recipes. By the end of the game, the fast-paced nature almost gets out of hand and is a fun and authentic take on what it would be like to run a fast-paced restaurant.

Battle Chef Brigade is one of the most unique cooking games to date. As the name suggests, it is a cooking based fighting game with some beautiful anime inspired visuals.

Battle Chef Brigade, published by Adult Swim Games, is part tile matching color game, part brawl, all disguised in a fun and fresh cooking experience. What’s even more amazing about the game, though, is the story of how it came to be.

In 2014, developer Trinket Studios crowdfunded more than $100,000 in a Kickstarter campaign, with the money raised then spent on developing and creating the title.

Flipline Studios hit gold when they first released Papa’s Pizzeria, a cooking game where you guessed it, make Pizza. However, since its first release in 2007, a huge line of cooking games has been developed, commonly referred to as the ‘Gameria’ series.

In 2022, there will be sixteen Gameria titles that are all based on cooking and focus on a separate food item or cuisine. Everything from tacos, hot dogs to pasta, the Gameria series has it all.

Like most cooking enthusiasts, the goal of the game is to run a successful restaurant and satisfy all the customers that come in. For those who have yet to play the Papa’s Gameria games, most are available in the iOS and Android app stores and on PC.

Mobile gaming is full of cooking games and simulators. So for those into the genre, mobile is definitely the place to be. But in saying that, quantity of cooking titles doesn’t always mean quality. While there is a lot to choose from, Cooking Fever is one of the standout mobile cooking experiences.

While you can play the title on PC, most will have first encountered the game on their phone. Part of what makes Cooking Fever such a great game is the extensive content it has. Players go from restaurant to restaurant, cooking food and serving drinks until they collect enough money to buy a new restaurant chain.

Any restaurant can be upgraded so that the furnishings are more expensive and the equipment used for cooking and making dishes is faster. The more the restaurant is upgraded, the more customers come in, the more money you earn to then make further upgrades or purchases. It’s an endless cycle of fun and it’s the type of game that can be started up and revisited at any time.

Cooking Simulator released for PC in 2019 still maintains its status as the most realistic cooking game experience one can have. It was an instant hit and its popularity continues to grow thanks to the game getting a proper VR release.

The gaming community went crazy with this crazy and hilarious cooking game that gives players the chance to cook basically anything they want. While most other cooking titles take on a more childish and less realistic design, Cooking Simulator tries to reflect a real kitchen experience with the design and gameplay.

For those who have yet to play the game or can’t access it, just head over to all the streaming platforms and check out some of the great content creators are producing while playing this game.