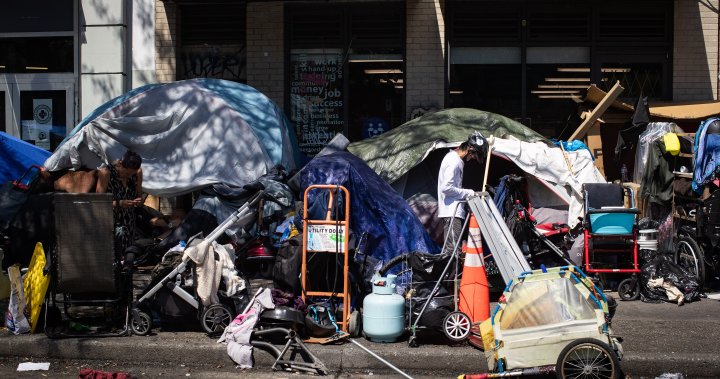 The mayor of Vancouver says the city is working to find indoor space for those living in a tent town on the Downtown Eastside, but he acknowledges there won’t be enough housing for everyone.

“We’re not sure we’ll have enough space there for everyone, but we’ve found space for a number of people,” Mayor Kennedy Stewart said. “There are some people in Hastings Street who already own a home, but they’re on the street because it’s so hot.”

Vancouver Fire Chief Karen Fry issued an order this week to evacuate a growing tent town on the 100 block of East Hastings Street due to the “significant fire safety risk” in the area.

The deadline was Wednesday, but no deletions have been made as of Friday afternoon.

City of Vancouver employees say they are handing out notices and putting up posters to let everyone know about the order and that the removal process will be done in phases.

Stewart said the issue is extremely challenging because of the recent warm weather.

“I was in an SRO two weeks ago, and as you approach the 30 to 25 degrees, it’s so hot you’ll see the population growing on the streets, just like you’re all over the city,” Stewart said.

Vancouver DTES tent city to be evicted on Wednesday, but residents say they have nowhere to go

Tents and other temporary structures have long been a fixture on East Hastings Street, but a number of permanent tents and the size of the encampment have grown rapidly since early July.

That’s when the Vancouver Police Department stopped supporting city engineers who conduct daily so-called “street sweeps,” the controversial practice the city says is needed to clean up trash and discarded items, but which some neighborhood attorneys say is targeting. homeless people and take their belongings.

Since then, some local residents have complained of difficulties accessing their buildings or even traveling on the sidewalk.

Daytime storage of personal items, more public toilets, misting stations and hand washing and drinking fountains are among the supports the city says it will provide.

— with files from Simon Little