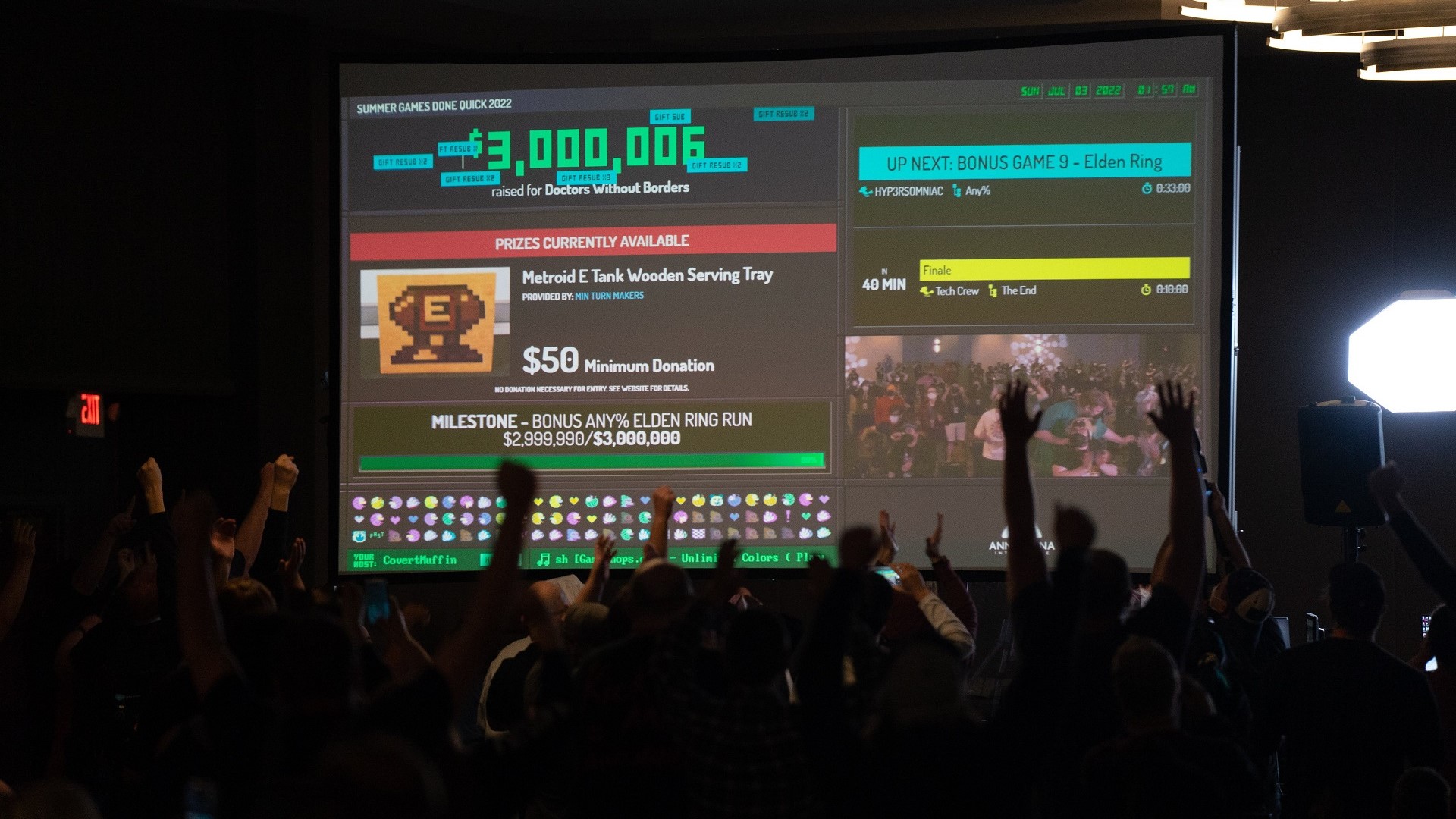 Summer Games Done Quick 2022 has raised more than $3 million for Doctors Without Borders in its first live marathon since the start of the COVID-19 pandemic.

Summer Games Done Quick 2022 was a special event for many reasons. First and foremost, it was the first since 2020 since GDQ returned to a week-long live fundraiser. Indeed, SGDQ 2022 spent the past week at its old stomping grounds in Bloomington, Minnesota raising money for charity. The week has just come to an end and SGDQ 2022 ended with a total of $3,016,687 raised for Doctors Without Borders.

This year’s total surpassed the $2.9 million raised at SGDQ 2021, although it’s slightly less than the record-breaking $3.41 million raised at Awesome Games Done Quick earlier this year. It took some effort to reach the $3 million milestone. The GDQ crew even offered a final Any% run of Elden Ring if they could pass the $3 million mark. Even with the addition of proceeds from Twitch Bits donated throughout the week, GDQ Twitch channel subscriptions, and purchases from GDQ partners such as The Yetee and Fangamer, viewers couldn’t unlock that final Elden Ring run until the end of the marathons. . It took one last push, nearly 15 minutes after the end of the first Elden Ring run, before the donors could make up the last $100,000.

Summer Games Done Quick took some time to gain a foothold, but managed to make up a significant chunk of the final total during the final two days of the event. The event also started to gradually fall behind schedule over the week, but was able to recover in time for the event’s biggest runs such as Super Mario World, The Legend of Zelda: The Wind Waker, Metroid Dread , Super Mario Maker 2, and the aforementioned Elden Ring.

Summer Games Done Quick as an in-person event was not always a certainty as the GDQ team cited uncertainty due to the ongoing spread of the COVID-19 omicron variant. The decision to go live was not made until early March with the event featuring both live and virtual runners. COVID-19 vaccinations and masks were required to attend the event.

The end of Summer Games Done Quick also marks the end of an era. After serving as GDQ Director of Marketing and Business Development (as well as several other roles) for the past eight years, this will be the final Games Done Quick event for Kasumi “Sumichu” Yogi, who said her goodbyes both during the event recap. from Saturday as the SGDQ final at the end of the broadcast. She also helped lead the public to $3 million in the final march. GDQ has grown significantly during Sumichu’s time with the team, expanding into regularly scheduled content through GDQ Hotfix and side events such as the all-female Frame Fatales. The next Frame Fatales event, Flame Fatales, will take place August 21-27 and will raise money for Malala Fund.

Ozzie has been playing video games since he picked up his first NES controller at the age of 5. He has been into games ever since, but only briefly left during his college days. But he was withdrawn again after spending years in QA circles for both THQ and Activision, spending most of his time helping the Guitar Hero series at its peak. Ozzie has become a huge fan of platform games, puzzle games, shooters, and RPGs, just to name a few genres, but he’s also a huge sucker for anything with a good, compelling story behind it. Because what are video games if you can’t enjoy a good story with a fresh Cherry Coke?