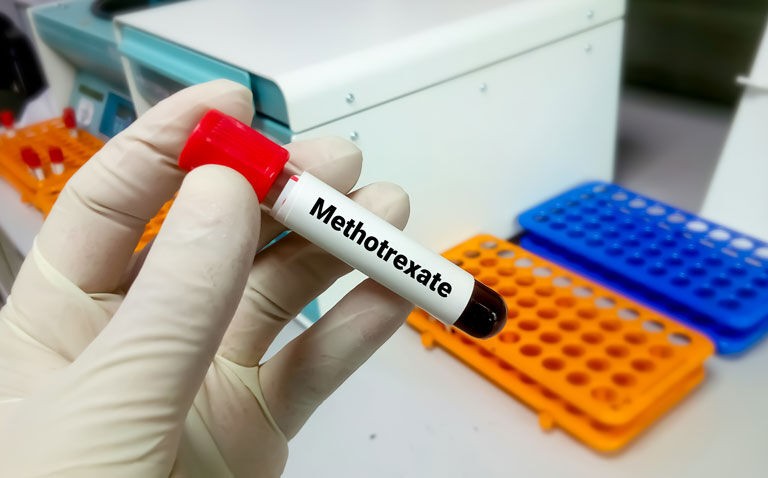 Stopping methotrexate (MTX) for two weeks after a third COVID-19 vaccination significantly increased the level of antibodies produced compared to continuing with the drug, according to the results of a randomized trial by a team of British researchers.

The use of the immunomodulatory drug methotrexate is known to adversely affect the humoral and cellular immune response to COVID-19 mRNA vaccines. In fact, studies have shown that seroconversion rates after COVID-19 vaccination are significantly lower in immunocompromised patients, especially organ transplant recipients. As a result, it is important to implement strategies that can enable immunocompromised people to mount a satisfactory immune response. Discontinuation of immunosuppressants such as methotrexate in patients with rheumatoid arthritis for either 4 weeks before, 2 weeks before and for 2 weeks after vaccination has been shown to improve the immunogenicity of seasonal influenza vaccination. In fact, the highest immune response occurred when MTX was stopped two weeks after vaccination, and this effect was confirmed in another study that specifically focused on stopping the drug two weeks after vaccination against seasonal flu.

As the effectiveness of this approach has not been formally evaluated for the COVID-19 vaccine, the UK conducted a randomized trial in immunocompromised patients prescribed methotrexate for the current study. The Vaccine Response On/Off Methotrexate (VROOM) study, randomized participants 1:1 to either suspend MTX (suspend methotrexate) for two weeks immediately after their COVID-19 booster dose, or to continue on the drug as usual ( continue methotrexate). Subjects were recruited from both rheumatology and dermatology clinics and who had been on low-dose MTX (<25 mg/week) for at least 3 months. In addition, the researchers only enrolled participants who had previously received two COVID-19 vaccine doses. The primary outcome of the study was the antibody response against the receptor binding domain of the COVID-19 spike protein (S1-RBD) 4 weeks after receiving the third COVID-19 vaccine dose. Secondary outcomes included S1-RBD antibody titers 12 weeks after vaccination and self-reported levels of disease activity.

A total of 254 subjects with a mean age of 59.1 years (61% female) were included in the study and divided equally between both strategies. Overall, 51% of the participants had rheumatoid arthritis alone, 34% had psoriasis, and 20% had a skin condition. The median dose of methotrexate taken as 20 mg/week.

After 4 weeks, the geometric mean SI-RBD antibody titer was 22,750 U/ml in the suspended methotrexate group and 10,798 U/ml in the continuous methotrexate group (p < 0.0001). This increase was independent of methotrexate dose and route of administration, as well as type of immune-mediated inflammatory disease and age. In addition, this difference in response remained significant at week 12 (16,520 vs. 8094).

A drawback of the study was that significantly more patients in the methotrexate group who had not suspended methotrexate self-reported at least one disease flare during the 12-week period compared to those who continued on the drug (71% vs. 45% , odds ratio, OR = 2.83, 95% CI 1.64 – 4.88). However, these flare-ups were generally self-managed and without any major impact on quality of life.

The authors concluded that their strategy to stop MTX was both safe and increased levels of COVID-19 antibodies and called for further studies to investigate the effect of stopping other immunosuppressants on the level of antibody response.

Quote
Abishek A et al. Effect of a 2-week interruption in methotrexate treatment versus continued treatment on the immunity of the COVID-19 booster vaccine in adults with inflammatory disease (VROOM study): a randomized, open-label superiority study. Lancet Resp Med 2022