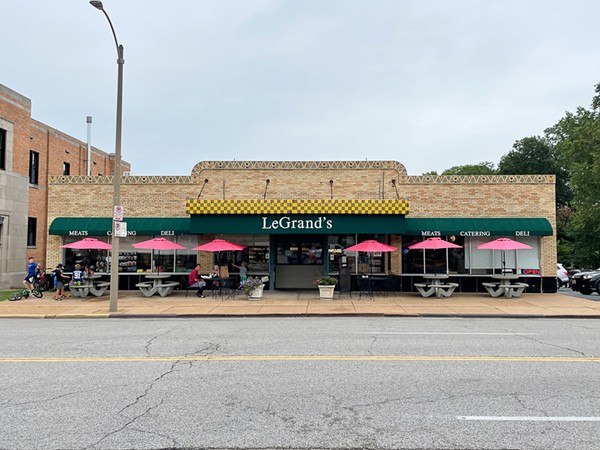 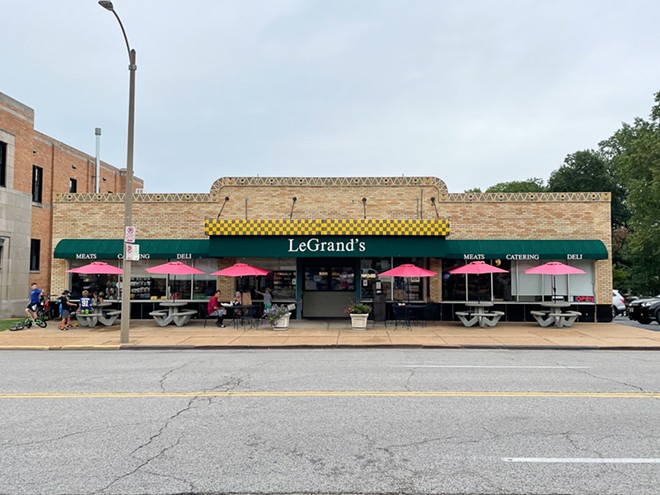 LeGrand’s Market & Cafe has been an institution since it opened in 1937.

Jim LeGrand laughs when he tells how St. Louisans referred to St. Louis Hills when Bender’s Market, the store that would become LeGrand’s Market & Catering (4414 Donovan Avenue, 314-353-6128)opened in 1937.

“It was just cornfields and swamp when Cyrus Crane entered Willmore and made the St. Louis Hills Estates and St. Louis Hills subdivisions in 1935 or 1936,” LeGrand says. “Mr. [William] Bender had a shop downtown and decided to build a shop there—in “the county,” as they called it then. His friends thought he was crazy to go so far away.”

While much has changed since Bender opened Bender’s Market—the combination grocery, butcher, cleaner, and bakery that would later become LeGrand’s—the current owner is proud of what remains the same. LeGrand still hangs the Tom Boy supermarket chain sign over the main entrance of the store, has a wide variety of high quality meats that are cut to order and most importantly maintains warm, personal relationships with his customers . 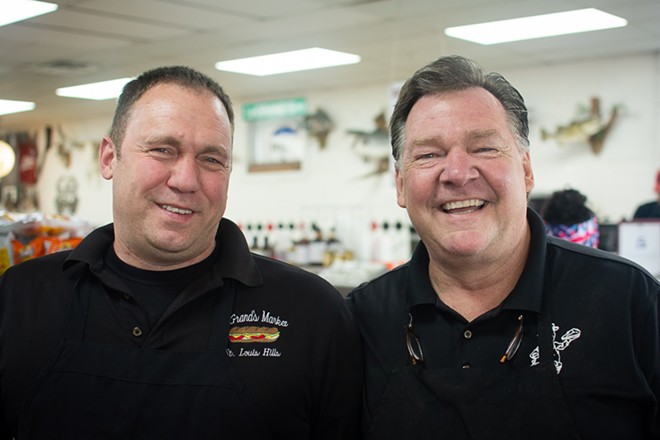 Jim LeGrand (right), who took over LeGrand’s in 1987 with his son Jimmy.

These tenants of the company were taught to him by Bender’s son, William Bender Jr. In 1977, LeGrand started working at Bender’s and was immediately drawn to Bender Jr., who had taken over the store from his father 20 years earlier. LeGrand’s own father had died a few years before he took up the job, and Bender Jr. took him under his wing and told him the history of the company (it had the first freezer box west of the Mississippi), and showed him the tricks of the trade. the trade and served as a father figure to then-teenage LeGrand.

LeGrand has absorbed it all.

“I started working there as a dredger when I was 16, and we just clicked,” says LeGrand. “The grocery store came easy to me because my mom and dad had a confectionery called Pete’s Market, and I was the one selling penny candies there. I was very familiar with working with the public, and I loved it. I loved talking to people and everyone know.”

Though he had a knack for the grocery store, LeGrand was passionate about horticulture and studied in the field at St. Louis Community College-Meramec while working at Bender’s. But as his responsibilities at the store increased, he made himself indispensable—so much so that when Bender Jr. retired in 1987, he sold the store to LeGrand and his brother, Joseph LeGrand. While they kept the name the same for the first four years, they eventually left their own mark on the place in 1991 when they bought the building and renamed it LeGrand’s Market & Catering. 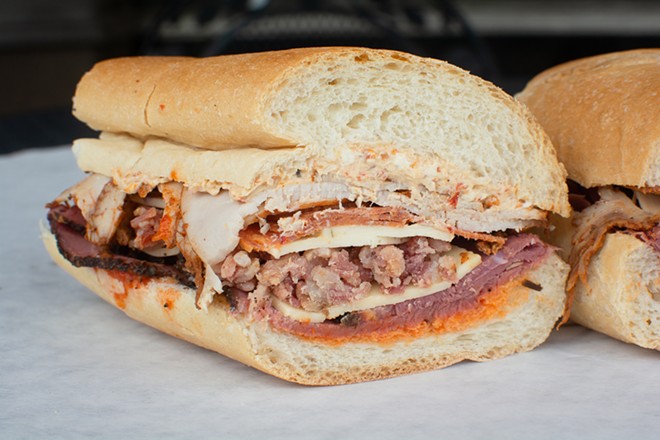 LeGrand has always understood the importance of preserving Bender’s legacy, even as he and his brother made it their own. All changes – such as strengthening the hospitality industry – have been gradual and always fit in with the spirit of the market. Perhaps the biggest addition is the store’s robust deli, which opened in 1998 thanks to some very St. Louis-style inspiration.

“We started it in 1998, during the Mark McGwire/Sammy Sosa home run race,” says LeGrand. “We came up with the McGwire sandwich chased with Sosa sauce, and from there we started adding sports themed sandwiches. It just exploded. Our sandwich guy, Joe Scanlon, has been doing it here for almost 30 years, and he’s come up with practically every sandwich in the deli, as well as all the homemade sauces. He just has a way of doing things. He loves food and is an incredible cook.”

One thing LeGrand and his brother, who passed away six years ago, never considered changing was the market’s famous bratwurst. As LeGrand explains, the brats are the market’s definitive offering, with fans from all over the region; he is so convinced of the quality that he often sends samples home with new customers, convinced that they will fall in love with the sausage and come back. They always do.

“This is the story of the bratwurst — and it’s something not everyone knows,” says LeGrand. “In 1985 I was the lead meat cutter and Mr. Bender had ordered these seasoning packets that sat on top of the meat box. The idea was that customers could buy the packets, add it to beef and pork and make their own sausage. Nobody ever bought it… so we decided we had to do something with it. We decided to modify it so that it would work for bratwurst as well, so we added a few more ingredients, and that’s how it happened.” 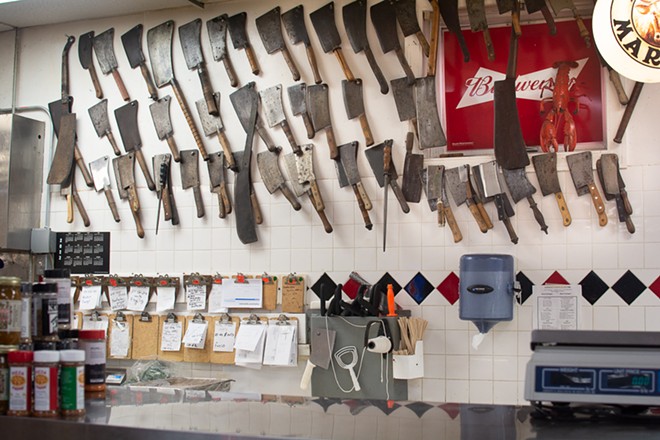 LeGrand’s is known for its bratwurst.

LeGrand believes his market’s bratwurst has such a cult following because it’s different from other versions. While the sausage is usually made with nutmeg, mace, dairy, and soy protein concentrate, LeGrand’s bratwurst has a more garlic-forward profile. Over the years, he and his team have added several more varieties, all of which have also become hugely popular, including one made with pineapple and brown sugar and another spicy one that is generously infused with jalapeños.

While he attributes the market’s popularity largely to his bratwurst, sandwiches and quality meats, LeGrand understands that there is a deeper reason why people continue to support his company. He is immensely grateful to his staff and believes having the right people in his corner has helped him succeed. Everyone who works in the store – including his son, who is about to take over the business when the time comes – goes above and beyond to ensure that everyone who walks through the front doors has a great experience, whether that be involves coming up with exciting new offerings or taking the time to talk to someone who may not be sure how to cook a particular cut of meat. LeGrand’s is a butcher shop for sure, but what the market really offers is its affiliates. 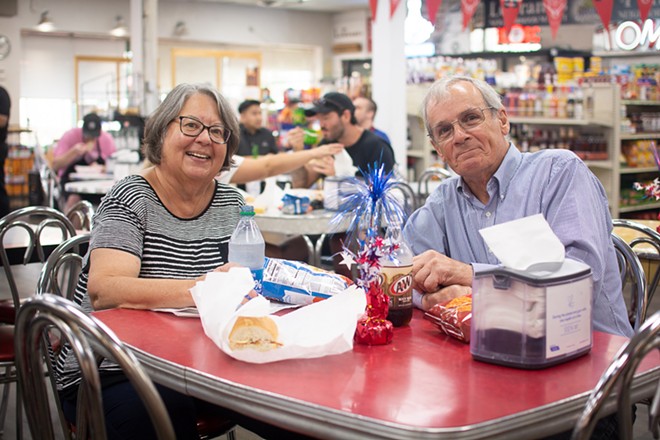 Linda and Roger Baltes have been shopping at the market for 45 years.

“It’s, ‘Hello Mary, hi Bob. How are your kids and grandma?’ and they immediately answer me with the same question,” says LeGrand. “It’s all about customer service and treating people the way you want to be treated. A ‘hello’ and ‘thank you’ are huge. We love what we do here, and it feels really good to do something people love.”