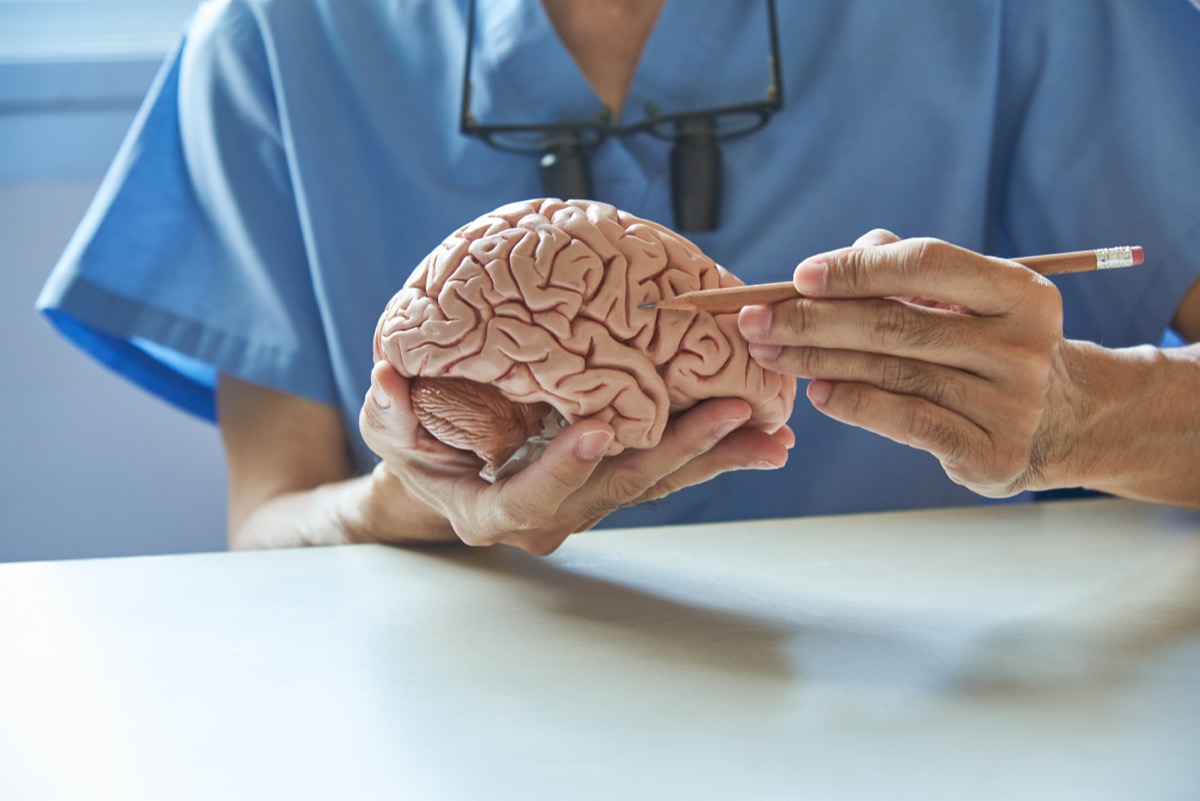 Often maligned as a side effect of a poor diet or broader ill health, inflammation can actually be good for you when it comes on acutely. That’s because during inflammation, the body sends a stream of white blood cells to a particular part of the body, which helps protect against infection or heal an injury.

However, when inflammation becomes chronic, it can harm your health by making you vulnerable to disease and causing complications throughout the body. Experts are now warning of a dangerous form of brain inflammation, which can occur in response to a bad nighttime habit. Read on to find out which nighttime mistake can cause long-term inflammation and why it can be dangerous to your health.

READ THIS NEXT: Hailey Bieber says this was the first sign of a blood clot in her brain.

Chronic inflammation is a dangerous condition that can spiral into your other body’s systems. “When the inflammation gets too high and lasts for a long time, and the immune system continues to pump out white blood cells and chemical messengers that prolong the process, it’s known as chronic inflammation,” explains Harvard Health Publishing. When this happens, the immune system stays in “fighting mode” for a long time, causing those same white blood cells to attack healthy tissues or organs.ae0fcc31ae342fd3a1346ebb1f342fcb

This can predispose you to a wide variety of serious health problems. Chronic inflammation has been linked to heart disease, cancer, diabetes, arthritis and bowel disease, to name a few.

READ THIS NEXT: Your risk of stroke is 85 percent higher if you sleep like this, study says.

Experts warn that many people develop encephalitis if they don’t get enough sleep at night. To make matters worse, a recent report in the magazine Trends in neuroscience states that even if you later “catch up” on lost sleep, the damage has already been done and will be difficult to undo.

In several recent studies on mice, researchers have found that the long-term damage caused by sleep deprivation persists long after normal sleep patterns are restored. “After an entire year of regular sleep, the mice that had previously been sleep deprived were still suffering from neural damage and brain inflammation,” The New York Times reported in a July 2022 article.

Inflammation from sleep loss appears to be caused by changes in blood vessels, Harvard experts theorize in a separate report. “During sleep, blood pressure drops and blood vessels relax. When sleep is restricted, blood pressure does not drop as it should, which could activate cells in the blood vessel walls that trigger inflammation,” they write. “A lack of sleep can also alter the body’s stress response system.”

They also note that poor sleep can cause problems in the glymphatic system (unlike the lymphatic system), which has the job of clearing beta-amyloid proteins in the brain. “In the deepest stages of sleep, cerebrospinal fluid flows through the brain, wiping out beta-amyloid protein linked to brain cell damage,” their experts write. “Without a good night’s sleep, this house-cleaning process is less thorough, allowing the protein to build up and lead to inflammation.”

Sign up for our daily newsletter for more health news delivered straight to your inbox.

like you to do skimp on sleep, it won’t be long before your brain feels the effects. “Just one night of lost sleep can keep beta-amyloid levels higher than normal,” Harvard Health warns. Worse still is “a cumulative pattern of sleep loss,” which they say can lead to “decrease in the structural integrity, size and function of brain regions such as the thalamus and hippocampus, which are particularly vulnerable to damage during the early stages of the disease.” of Alzheimer’s disease.”

To make matters worse, a poor night’s sleep of even just one night can quickly lead to poorer sleep overall. “A vicious cycle sets in. Accumulation of beta-amyloid in the frontal lobe of the brain begins to interfere with deeper, non-REM slow-wave sleep. This damage makes it more difficult to sleep and to retain memories and to consolidate,” Harvard experts write.

If you think your sleep habits could be putting your health at risk, talk to your healthcare provider for tips on how to improve your sleep hygiene and get better rest.