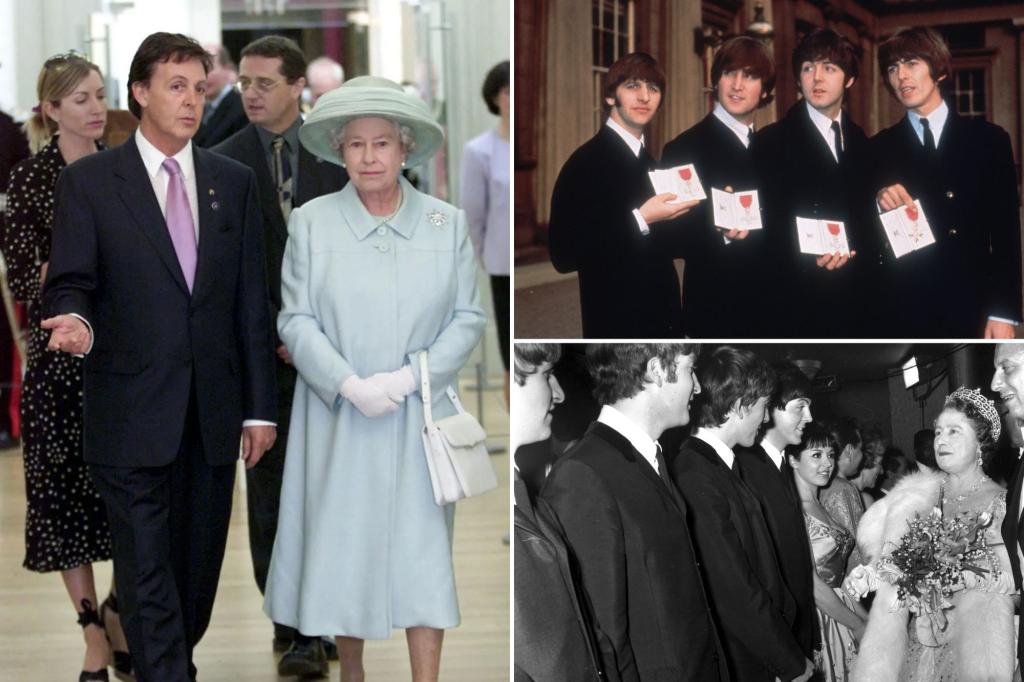 Paul McCartney shared a heartfelt tribute to Queen Elizabeth II a day after her death.

McCartney, 80, who met the Queen “eight or nine times” and wrote the cheeky 26-second love song “Her Majesty,” told fans he was “privileged” to have been alive throughout Elizabeth’s 70-year reign. .

“When I was 10 years old, I entered an essay competition in Liverpool and won my division for my essay on the British monarchy, so I’ve been a long-time fan,” he wrote on Facebook on Friday.

He then went on to tell me how “she impressed me with her great sense of humor coupled with great dignity” every time they saw each other, sharing photos of some of the encounters.

McCartney first met the late Queen in 1965 when The Beatles were awarded the Most Excellent Order of the British Empire.

“I remember being taken apart and shown the proper protocol. We were told how to approach Her Majesty and not talk to her unless she talks to us. For four Liverpool boys it was, ‘Wow, hey man.’”

Whether or not the group followed Buckingham Palace decorum was never confirmed. John Lennon later stated that the band smoked a joint in the palace bathroom before the meeting. McCartney and George Harrison refuted Lennon’s claim, and Ringo Starr said he no longer remembered it.

The Fab Four bassist then crossed paths with Elizabeth at the Royal Albert Hall in 1982, he said.

“It was at an event” [late wife] Linda [McCartney] and I attended called An Evening for Conservation. Part of the evening included some orchestral reworkings of some Beatles songs and I remember talking to Her Majesty about it. She also reintroduced me to Prince Philip, who said he remembered our last meeting in the 1960s!” he wrote.

A decade and a half later, the Queen graciously agreed to open the Liverpool Institute for Performing Arts on the site of my old school where George Harrison and myself attended,” McCartney said.

A year later, the Queen knighted Sir Paul, which he said was a “very proud day for me” and “one of the best days ever”.

“I was very honored to be offered a knighthood and of course it would have been rude to turn it down! I remember it was spring and the sky was blue. It was a beautiful day and I remember thinking I would come a long way from a small terraced house in Liverpool!”

The “Hey Jude” singer then serenaded the Queen on her golden jubilee in 2002.

“While Her Majesty was on stage to receive applause at the end of the show, I joked, ‘Well, I guess this will happen next year?’ to which she replied: ‘Not in my garden it will not!’”

McCartney went on to explain how Elizabeth attended a painting exhibition he organized at a Liverpool gallery he used to visit with Lennon, and that he also spoke to her at the Celebration of the Arts at the Royal Academy of Arts.

“On June 4, 2012, the Queen was due to celebrate her Diamond Jubilee and it was so special in many ways. This was the first time I performed for her since her last anniversary, and it was great to see all the people in Pall Mall stretching out, as well as meeting other members of the royal family afterward. It was a great weekend to be British.”

The last meeting between the towering Britons took place in 2018 when McCartney was awarded the Companion of Honor medal.

“I shook her hand, leaned forward and said, ‘We must stop meeting this way,’ to which she giggled a little and went on with the ceremony. I wondered if I wasn’t being too cheeky after saying this, this was The Queen after all, but I have a feeling she didn’t mind. God bless you. You will be missed.”