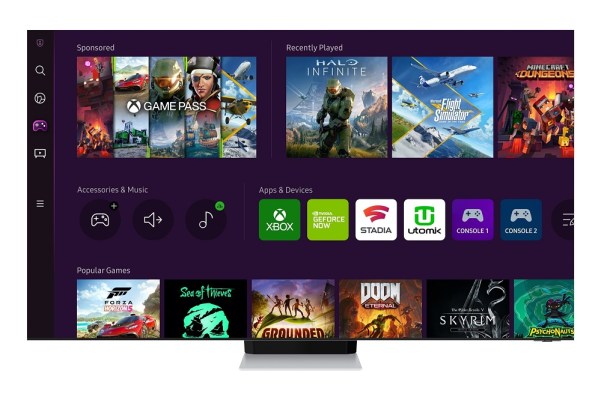 Samsung announced yesterday that it is bridging its hardware and software for a better gaming experience, bringing the Samsung Gaming Hub to its 2022 line of smart TVs and monitors. Game streaming content on the hub includes Xbox, NVIDIA GeForce Now, Google Stadia and Utomik, along with apps YouTube and Spotify. Twitch has also been added and Amazon Luna will be available soon.

The company is rolling out its gaming hub on Samsung TVs such as the 2022 Neo QLED 8K, Neo QLED 4K and 2022 Smart Monitor Series.

The unofficial Twitch.TV app was removed from Samsung smart TVs in 2019, so the news marks the first time the official app is coming to the platform. Amazon’s Luna cloud gaming service has been available on Fire TVs since March, and this partnership with Samsung could provide a way for the fledgling gaming service to reach more players.

Microsoft’s Xbox TV app is the most significant new addition as it is currently exclusive to the Samsung Gaming Hub and provides access to Xbox Cloud Gaming.

Smart TVs offer an increasingly viable alternative to dedicated gaming hardware, and Samsung is betting that an all-in-one destination for cloud and console games will attract gamers who put convenience first.

“The Samsung Gaming Hub combines Samsung’s leadership in streaming technology with our experience in creating the industry’s most advanced hardware, removing barriers to entry so people can just play,” said Won-Jin Lee, president and head of the Service Business Team at Samsung Electronics, said in a statement. “By expanding partnerships with leading game streaming services and expert-curated recommendations, players can easily browse and discover games from the widest selection available, regardless of platform.”

Players with dedicated game consoles can use Samsung’s support for passthrough controller inputs with the smart TVs, allowing them to use a single controller instead of pairing several. That way, consumers can use the Bluetooth headsets and controllers they already own for apps and devices.

Samsung Gaming Hub users can also access game recommendations, game news and tutorials as they could on a dedicated game console.