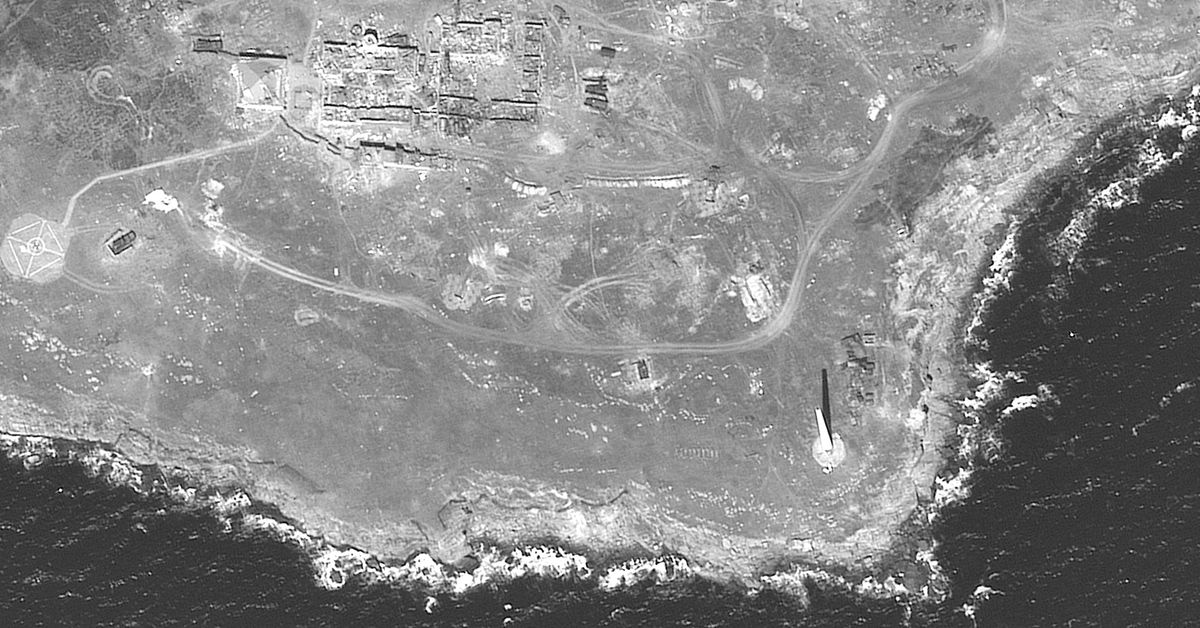 KYIV, June 30 (Reuters) – Russian forces left the strategic outpost of Snake Island in the Black Sea on Thursday, in a major victory for Ukraine that could ease the Russian blockade’s hold on Ukrainian ports.

Russia’s defense ministry said it had decided to pull out of the rock as a “goodwill gesture” to demonstrate Moscow’s efforts to open a humanitarian corridor through which grains could be shipped from Ukraine , not hinder.

Ukraine said it had dislodged Russian forces after a massive artillery and rocket attack at night.

Ukraine’s southern military command posted an image to Facebook of what appeared to be the island, seen from the air, with at least five massive columns of black smoke rising above it.

“The enemy hastily evacuated the remains of the garrison with two speedboats and probably left the island. Currently, Snake Island is consumed by fire, explosions erupt.”

Oleksii Hromov, Brigadier General of the Ukrainian Armed Forces, told a briefing that Ukrainian troops are not occupying the island yet, “but they will, believe me”.

The bare rock overlooks the sea routes to Odessa, Ukraine’s main Black Sea port, where Russia is blocking food shipments from one of the world’s largest grain suppliers.

Snake Island has held the world’s attention since Russia seized it on the first day of the war, when a Ukrainian guard, ordered to surrender by Russian flagship cruiser Moskva, radioed back: “Russian warship: go fuck yourself”.

“Most importantly, this could open the door for Ukrainian grain exports from Odessa, which is critical to the Ukrainian economy and global food supply,” tweeted Rob Lee, a senior fellow at US-based Foreign Policy. Research Institute.

Lifting the blockade was a primary strategic goal of the West: US Secretary of State Antony Blinken has accused Russia of deliberately causing world hunger as ‘blackmail’.

Moscow denies blocking ports and blames food shortages on Western sanctions, saying it is restricting its own exports.

“We are not preventing the export of Ukrainian grain. The Ukrainian army has cleared the entrances to their ports; no one is stopping them from clearing those mines and we guarantee the safety of grain shipping there,” President Vladimir Putin said on Thursday.

Several military experts said driving the Russians off Snake Island alone is not enough to unblock the ports.

“Does that mean the grain is suddenly flowing? No, really not,” said Marcus Faulkner, a war studies lecturer at King’s College London, pointing out that ports were still being mined and Russia was still able to intercept cargo ships at sea.

Oleg Zhdanov, a military analyst from Kiev, also said the ports could not be opened immediately, but it was still a “great victory in terms of liquidating the Black Sea fleet’s dominance”.

Last month, the British Ministry of Defense said that if Russia could consolidate its hold on Snake Island with air defense and coastal defense cruise missiles, it could dominate the northwestern Black Sea. read more

Russia has defended the island since February, despite Ukraine’s increasing claims to cause serious damage, sink supply ships and destroy Russian fortifications.

New weapons sent by the West made the Russian garrison even more vulnerable, especially HIMARS, a powerful missile system supplied by the United States that Ukraine began using last week. Lee said Russia’s abandonment of the island is “probably a tangible result of NATO arms deliveries to Ukraine”.

Ukraine’s victory over Snake Island comes after weeks in which the momentum in the conflict appeared to shift in favor of Russia, which has focused its firepower on capturing towns and villages in eastern Ukraine’s Donbas region.

It captured the city of Sievierodonetsk last week after weeks of fierce fighting and is now trying to encircle the city of Lysychansk across the Siverskyi Donets River.

Ukrainian authorities said they were trying to evacuate the remaining residents from Lysychansk, where they say some 15,000 people remain.

“There is constant fighting. The Russians are constantly on the offensive. It does not stop,” regional governor Serhiy Gaidai told Ukrainian television.

An official of the pro-Russian separatist government in the province told the RIA news agency that the oil refinery in Lysychansk is now completely owned by Russian and pro-Russian forces and that all roads to Lysychansk are also under their control.

Ukraine says the main road out is largely impassable due to fighting, but the city has not yet been completely cut off.

Despite Ukraine’s gains in recent weeks and heavy losses in the Donbas, Ukraine hopes to do enough damage to exhaust Russia’s advancing army. Ukrainian forces have mounted a counterattack in the south, where Russia-installed proxies have announced they are preparing for votes to join Russia.

Ukraine’s 60th Infantry Brigade said on Facebook on Thursday that it had recaptured the village of Potyomkine in the southern region of Kherson. This could not be independently verified.

In Madrid, NATO leaders held the second day of a summit at which the alliance declared Russia to be its main opponent and announced plans to put 300,000 troops on higher alert.

The alliance invited Finland and Sweden to join, and leaders pledged more weapons to Ukraine, including US President Joe Biden, who announced the next $800 million aid tranche.

Turkey, which has tried to act as a mediator, said it hoped for progress on an agreement to reopen Ukrainian ports. Greece, which has the world’s largest commercial fleet, said it was willing to send ships to bring Ukrainian grain out.