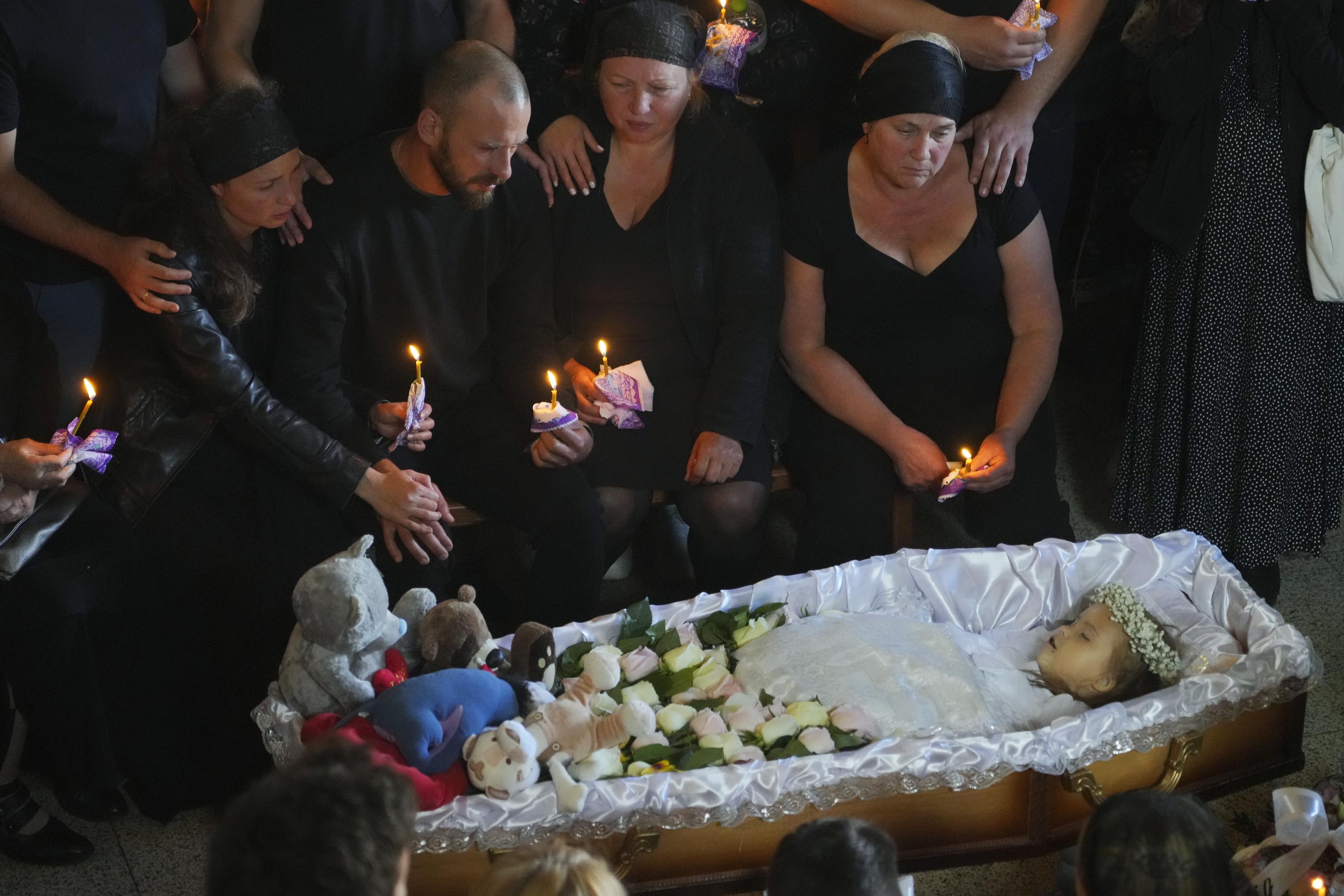 VINNYTSIA, Ukraine (AP) – Russian missiles hit industrial facilities in a strategic city in southern Ukraine on Sunday as a funeral was held for a 4-year-old girl killed in a previous deadly attack elsewhere in the country.

Liza, who had Down syndrome, was on her way to a speech therapist with her mother when a Russian missile hit the city of Vinnytsia in central Ukraine on Thursday. At least 24 people were killed, including Liza and two boys, ages 7 and 8. More than 200 others were injured, including Liza’s mother, who is in serious condition in an intensive care unit.

“I didn’t know Liza, but no one can go through this in peace,” said priest Vitalii Holoskevych, who burst into tears when Liza’s body lay in a coffin of flowers and teddy bears in the 18th-century Transfiguration Cathedral in Vinnytsia.

“We know evil cannot win,” he said in a trembling voice.

On Sunday, more Russian missiles hit industrial facilities in the strategic southern city of Mykolaiv, a major shipbuilding center at the mouth of the Southern Bug River. There was no direct information on casualties.

Mykolaiv has faced regular Russian missile strikes in recent weeks as the Russians have tried to soften the Ukrainian defenses.

The Russian army has set itself the goal of closing off the entire Black Sea coast of Ukraine all the way to the Romanian border. If successful, such an attempt would deal a crushing blow to Ukraine’s economy and trade and allow Moscow to secure a land bridge to the Moldovan separatist region of Transnistria, which is home to a Russian military base.

Early in the campaign, Ukrainian forces thwarted Russian attempts to capture Mykolaiv, which lies on the Black Sea coast between Russian-occupied Crimea and the main Ukrainian port city of Odessa.

Since then, Russian forces have halted their attempts to advance into the city, but they have continued to harass both Mykolaiv and Odessa with regular rocket attacks.

Russian Defense Ministry spokesman Lieutenant General Igor Konashenkov said on Sunday that Russian missiles destroyed a depot for anti-ship harpoon missiles supplied to Ukraine by NATO allies, a claim that could not be independently confirmed.

The Russians also tried to fortify their positions in the Kherson region near Crimea and part of the northern Zaporizhzhya region, which they captured early in the conflict, fearing a Ukrainian counter-offensive.

The British Ministry of Defense said on Sunday that Russia is moving manpower and equipment between Kherson, Mariupol and Zaporizhzhya. It said the Russians are also stepping up their security measures around Melitopol.

It added: “Given the pressure on Russian manpower, the reinforcement of the south as the battle for the Donbas continues indicates the seriousness with which Russian commanders view the threat.”

For now, the Russian military has focused its efforts on trying to take control of Ukraine’s eastern industrial heartland, Donbas, where the most capable and well-equipped Ukrainian armed forces are located.

Ukraine says its forces still maintain control of two small villages in the Luhansk region, one of the two provinces that make up the Donbas, and successfully fend off Russian attempts to penetrate deeper into the second, the Donetsk region .

The general staff of the Ukrainian army said on Sunday that Ukrainian forces have thwarted Russian attempts to advance on Sloviansk, the main Ukrainian stronghold in Donetsk, and other attacks elsewhere in the region.

During a visit to the front lines on Saturday, Russian Defense Minister Sergei Shoigu issued an order “to further intensify the actions of units in all operational areas”.

The Russian military said it hit Ukrainian troops and artillery positions in Donbas in the latest series of attacks, including a US-supplied HIMARS rocket launcher. The Russian claims could not be independently verified.

While focusing on Donbas, the Russians hit areas across the country with rocket attacks.

President Volodymyr Zelenskyy urged Ukrainians not to fall for Russia’s attempts to scare them with warnings of horrific missile attacks to come, which he said were intended to divide Ukrainian society.

“It is clear that no Russian missile or artillery will be able to break our unity or divert us from our path” to a democratic, independent Ukraine,” he said in his overnight video address to the nation. It is also clear that Ukrainian unity cannot be broken by lies or intimidation, fakes or conspiracy theories.”

In the Kharkiv region, at least three civilians were killed and three others injured on Saturday in a Russian attack on the town of Chuhuiv, which is just 120 kilometers from the Russian border, police said.

Lyudmila Krekshina, who lives in the apartment building that was hit, said a man and woman were killed, as well as an elderly man who lived on the ground floor.

Another resident said she was lucky to have survived.

“I would run and hide in the bathroom. I didn’t make it and that saved me,” said Valentina Bushuyeva. She pointed to her ruined apartment and said, “There’s the bathroom – explosion. Kitchen – half a room. And I survived because I stayed put.”

Follow the AP’s coverage of the war at https://apnews.com/hub/russia-ukraine