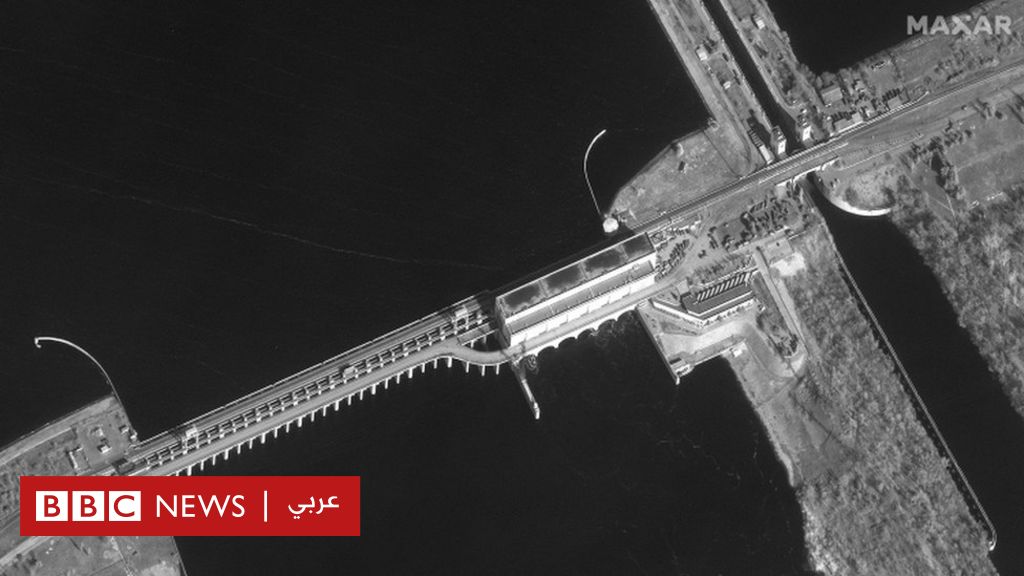 Zelensky said that if the Kakhovka hydroelectric plant were to be destroyed, it would lead to a “mass catastrophe”.

In a letter to European leaders, he warned that hundreds of thousands of people living around the Dnipro River are at risk of serious flooding if the dam is destroyed.

It could also deprive all of southern Ukraine, including Crimea, of its water supply, as it would lead to the destruction of the Northern Crimean Canal, which supplies water to Crimea, which has been occupied by Russia since 2014.

A BBC correspondent in Kiev says Ukrainian authorities suspect Moscow is planning an attack on the dam and then blames Ukraine.

The US-based Institute for the Study of War said Russia believed floods from the destruction of the dam could provide cover for Russian troops if they withdraw from areas in the city of Kherson.

The dam is located 70 km northeast of Kherson.

According to Mikhailo Podolyak, an adviser to President Zelensky, the Russian goal of destroying the dam was to stop Ukraine’s advance into the Kherson region and protect Russian troops stationed there.

Using energy as a weapon

Cities across Ukraine have begun cutting electricity consumption for next winter as Ukrainian authorities warned on Thursday that serious damage to the country’s energy network from Russian attacks would cause another wave of refugees fleeing the country.

In his address to the European Council, Zelensky said that “the Russian leadership has ordered to turn the energy system itself into a battlefield. The consequences of this are again very serious for all of us in Europe.”

According to Ukrainian authorities, energy-saving measures were taken across the country after Russian missiles and drone strikes destroyed at least 30 percent of the country’s power plants within a week.

After power outages in parts of Kiev overnight, the capital’s mayor, Vitali Klitschko, urged businesses to reduce the use of screens and signage “as much as possible”.

He said: “Even simple savings and a reduction in electricity consumption in every home will help stabilize the work of the national power grid.”

The response of Ukrainian citizens to the electricity rationing measures caused by Russian attacks on energy facilities has been somewhat challenging.

“This will not change our position, we will probably hate them even more,” Olga, who refused to give her last name and is a resident of Dnipro in central Ukraine, told AFP.

“I’d rather be out in the cold without water or electricity than in Russia,” she added.

According to Kirillo, an electronics retailer, people were quick to buy auxiliary electrical supplies such as generators and batteries.

He told Agence France-Presse about the coming winter: “I don’t think there is anything we can’t stand.”

“There will be some form of heating anyway, and it doesn’t matter if the temperature gets to 16 degrees Celsius instead of 20 degrees. You just need to put on a thermal suit and socks,” he added. .

Meanwhile, the White House said it has evidence that Iran had deployed military experts in Russian-occupied Crimea, where they are playing a direct role in the war by helping the Russians pilot Iran-made Shahed-136 drones. used to attack Ukrainian targets such as power plants.

He also said there were concerns that Iran could provide Russia with surface-to-surface missiles for use in the war.

He added that “the United States will use all means to detect, deter and confront the Iranian supply of these ammunition against the Ukrainian people.”

The European Union and the United Kingdom have announced sanctions against three Iranian generals and an arms company accused of supplying drones to Russia.

But bipartisan support in the United States for military aid to Ukraine is waning in Washington, with Republicans pointing out that funding could dwindle after next month’s congressional elections.

“They said if they win, they probably won’t fund Ukraine, or continue,” US President Joe Biden said of the Republicans during his Pennsylvania campaign.

The situation in Kherson

Not much has changed along the long front lines in Kherson, where Russia is sending a large number of soldiers of 200,000 who have recently been called up to fight.

On Thursday, Russian President Vladimir Putin visited a training center for the mobilized troops southeast of Moscow, where he hugged the soldiers and fired a rifle into the air.

Some soldiers opened their backpacks to show him what they had been given, and one of them asked about his family, and he replied that he had a five-year-old daughter.

Putin hugged him and wished him “good luck”.

Meanwhile, Russia continues to evacuate people from Kherson as Ukrainian forces approach the southern city, which has been under Moscow’s control since the early days of the invasion in February last year.

Moscow-designated authorities in Kherson said about 15,000 people had been evacuated from the city.

Television channel Rossiya 24 broadcast photos of people waiting to board the ferry as they were unable to use the bridges destroyed by Ukraine.

Kirill Strimosov, a pro-Russian official, said on Telegram that the evacuations would give Russian troops more room to fight, and said they would not give the city back to the Ukrainians.

“Remember, no one will give up Kherson,” he said.

But the Ukrainians say the departure of civilians from the area was in fact forced deportations to Russia.

The Institute for the Study of War said in its daily analysis that with Ukrainian forces continuing to blockade the city of Kherson, the Russian authorities have most likely begun to “create informational conditions to justify the planned Russian withdrawals and their significant territorial losses”.