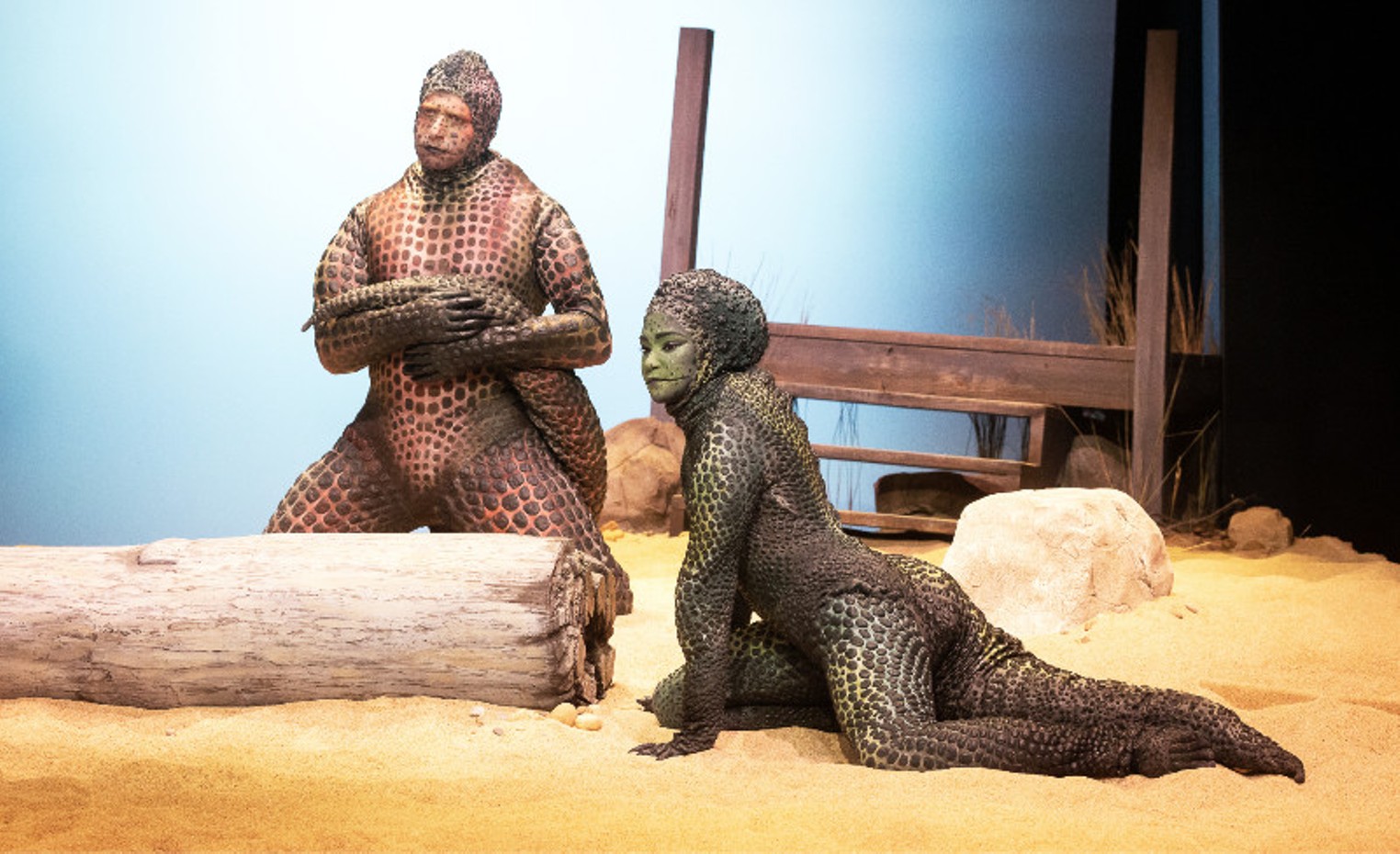 Two very good things happened in downtown Houston last night. The Astros defeated the Yankees 4-2 in the first game of the American League Championship series and Edward Albee’s seascape (1975) opened on the Alley. Both events were winners.

Two married couples meet on a beach. One is very human (Charlie and Nancy); one is quite lizard (Leslie and Sarah), although the knobby pair speak English. It’s a classic Albee situation, albeit surreal and absurd, in that the couples confront each other about love, illusion, lost dreams, joyless marriage, minor pains, past sex, the meaning of life. Albee adapts these themes like the master dramatist he is, juggling finesse and surprising us with his pun.

In an almost mirror image, these four are the kinder, softer versions of the bitchy, searing couples in his masterpiece, Who’s Afraid of Virginia Woolf? (1962). Oh, the sting is still there, but it’s now evolved into a gentler exploration of what it’s like to be human.

Before the undersea creatures crawl across the sand dunes towards the end of Act 1, Charlie and Nancy (Philip Goodwin and Franchelle Stewart Dorn) have dissected their long lives together. Retired, with grown children on their own, and apparently financially prosperous – they could afford to fly around the world to visit beaches, as Nancy dreams – Charlie wants nothing more than to relax and take a nap with his remaining time. “I don’t want to do anything.”

Nancy covers under this limp desire. She wants life to go on, she wants new horizons, challenges, she wants to live in the now. She wants ‘more’ and does not want to ‘settle’. She doesn’t want to “wrap it up and put it away,” in one of Albee’s precise, delightful descriptions. When Charlie recalls his youthful folly on the beach, holding rocks in his hands and sinking to the bottom as one with the creatures and the sea, she begs him to relive it. “Be young again,” she entices, then whines. No, he is satisfied as he is. They itch back and forth like the old married couple they are, reliving the past in fragrant monologues as clouds drift over as Izmir Ickbal’s beautiful lighting ripples in memory.

When the pair reach a gentle stalemate, Leslie and Sarah (Zachery Fine and Raven Justine Troup) appear, and the play takes a nice dive into Aesop territory via Albee’s patented wise comedic voice. The two anthropomorphic creatures, wary at the sight of these soft white things on the beach that, at the behest of Nancy, lie on their backs with feet up, smiling madly, sniffing and prodding, equally wary. The creatures run across the dunes like wayward iguanas, dragging their impressive tails behind them. (Nicole Wee’s costumes, for man and creature, are exceptional. The lizards shimmer as if they were phosphorescent.)

After introductions and lessons about shaking hands, people try to teach the lizards about life on Earth: different emotions such as love, loneliness, sadness; flying in an airplane; the theory of evolution; raise a child. Nancy even begins her explanation of evolution with ‘once upon a time’. The creatures’ curiosity is played out like a well-oiled vaudeville routine. It’s really funny, until Charlie pushes Leslie’s buttons – both alpha males in their own way – and attacks Leslie.

The troubles eventually pass, the dusky sky glows orange, and the creatures rush back to the sea, away from these troublesome land creatures. But Leslie and Sarah are no longer comfortable under the sea; they don’t belong. They are hungry for this new land. As if changing before our eyes, they stand on their feet. A strange force prevents them from returning down. Nancy begs them to stay. “We could help you.” The lizards, now fully standing, turn to face the human beings. “Okay, let’s go,” Leslie says as the lights dramatically transform them into silhouettes. And with this dramatic bloom, Albee ends his mysterious, provocative and tender fairy tale.

Beautifully eliminated by four non-Alley actors, ingeniously directed by Nathan Winkelstein, and set in Kevin Rigdon’s tasteful sand-and-driftwood world, infused with Sharath Patel’s rich sonic atmosphere – seagulls, planes roaring overhead, waves just over. Blasting the Dunes, Albee’s Pulitzer Prize winner is highly entertaining in its idiosyncrasy, prickly in its observations about life and marriage, and wonderfully enigmatic in its meaning. Albee slyly suggests that Leslie and Sarah might eventually turn into Charlie and Nancy. Or maybe Charlie and Nancy are modern avatars of Leslie and Sarah. Whatever you decide, Seascape is one of Albee’s wonders, and The Alley’s production is another.

So are the ‘Straws.