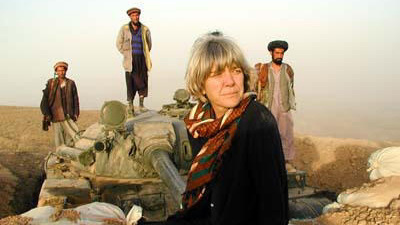 Anne Garrels reports from Iraq in 2003.

Anne Garrels left this earth wishing she could go to Ukraine to report on the war and tell more stories of struggle, courage and survival. Annie and I handed each other the keys in many war zones, including Kosovo, Afghanistan and Iraq. As she passed away this week, at age 71, I thought of the long dinners we’d have before one of us left, filled with little gossip in bombed-out places, and long, restorative belly laughs.

But I want to use this time to hear from Annie.

She became a journalist in the 1970s, when female reporters were often given stories about candidates’ households or wives, and were fired by male editors and colleagues with petty nicknames.

Annie always said she considered it an advantage to be a female journalist, “especially ironically in societies where women are segregated,” she once wrote. “I can walk on both sides of the street, talking to male officials while visiting the women’s shrines, which are often off limits to foreign men.”

Her 2017 book Putin country describes the taxi drivers, teachers and mobsters she met during two decades of visits to Chelyabinsk, Russia – a former Soviet military region near the Ural Mountains.

She learned a lot, she wrote, in a banya or bathhouse for women, where, she said, “Tanguistic discussions are interspersed with a glass of cold water … maybe a beer.”

“It’s hard to find women who have a lot of good to say about Russian men,” she wrote. One woman told Annie, “‘While a lot of men went to their couch and bottle, we women forced ourselves to fit in. Someone had to feed the kids.'”

Her 2004 book, Nude in Baghdadrecounts her weeks as the only journalist to remain in the city when American troops bombed the capital.

Because Annie stayed in Baghdad, she got a few shopkeepers who stayed up all night watching over looters to tell her how the American “victory” scared them. She wrote:

“I have never known freedom,” says thirty-three-year-old Ali al-Abadi, the tremor in his voice betraying a mixture of mixed feelings. “We want a just government, but we want a just Iraqi government,” he added. … They want nothing to do with someone who has just returned from a luxurious life abroad while suffering themselves at home.”

And because Anne Garrels had shared some of those most dangerous times with them, place after place around the world, people looked her in the eye and talked to her.