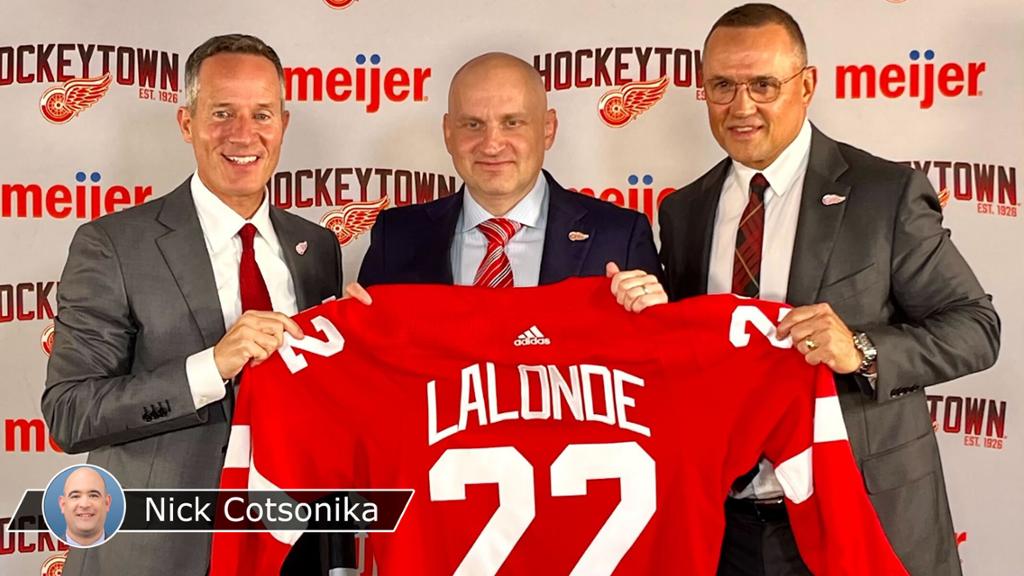 DETROITT — Derek Lalonde held up a jersey after the Detroit Red Wings introduced him as their new coach on Friday. To his left was General Manager Steve Yzerman, smiling broadly, and the connection was clear.

Lalonde joined the Lightning in 2018-19 as an assistant to Jon Cooper. He helped them win the Stanley Cup in 2020 and 2021 and came close to victory this year by losing to the Colorado Avalanche in six games in the Stanley Cup final.

But the hiring wasn’t that easy, and the path to the Stanley Cup Playoffs won’t be that easy either.

Yzerman only worked with Lalonde for one season, so he didn’t hire him because of their relationship. He got good references for Lalonde inside and outside Tampa Bay, and after interviewing him, he felt that Lalonde’s personality and philosophy suited him best.

“I expect him to do things his way, not necessarily the Tampa Bay Lightning way or the Jon Cooper way,” Yzerman said. “I hired Derek to do it his way, and I think he’s smart enough… He got where he’s come by adapting, learning and growing from his experience.”

The Red Wings have a lot to do to adapt, learn and grow. They have missed the playoffs for the past six seasons and when asked why they can’t compete for the playoffs next season, Lalonde said he needed to temper expectations.

“We got great in Tampa when we literally…” Lalonde said, his voice trailing off. “We started to focus on the process. I know it sounds such a cliché, but to sit there and talk about making the playoffs and where we will be or putting a number on wins, I think “That’s foolish, and that could hurt you. That could go the wrong way.”

Lalonde said Yzerman was “very clear throughout the interview process that this is going to take some time.”

There are two processes here: one is putting together the roster. The other is building the identity of the team – the structure, style, habits.

The roster is promising, but it remains a work in progress.

Yzerman took over as GM on April 19, 2019, and he has had only three concepts. His first selection was defender Moritz Seider at number 6 that year; Seider just won the Calder Trophy as rookie of the year. His next pick in the first round was forward Lucas Raymond at No. 4 in 2020; Raymond just finished fourth in the Calder voting by the Professional Hockey Writers Association. His next first round pick was defender Simon Edvinsson at number 6 in 2021; Edvinsson is 19 and is expected to debut in North America next season.

“Obviously not all the pieces are there, but at the same time there are some exciting pieces to build around,” Lalonde said. “I was also attracted to this track because you could see a foundation being laid. Obviously there is still a long way to go, but there is a lot to work with. There are some things to work with works that really get me excited as a coach.”

With Lalonde, the identity gets a new start.

Under Jeff Blashill last season, the Red Wings were 25th offensively (2.77 goals per game) and 31st defensively (3.78 goals against per game). They were 26th on the power play (16.3 percent) and 32nd on the penalty kill (73.8 percent). Lalonde talked about being more difficult to play against more consistently and to better manage the puck.

“My job is to start that process, and hopefully we’ll talk about playoffs sooner rather than later, but it’s about the process,” said Lalonde.

Lalonde brought out the 2018/19 Lightning, who won 62 games and the Presidents’ Trophy as the NHL’s top regular-season team, but was swept by the Columbus Blue Jackets in the first round of the Eastern Conference. They tied the 1995-96 NHL record for wins by the Red Wings, who won the Presidents’ Trophy that season and lost to the Avalanche in the Western Conference Finals.

Like the Red Wings, who won the Cup in 1997, 1998 and 2002 with Yzerman as captain and in 2008 with Yzerman in the front office, the Lightning learned from experience, changed the way they played and went on to win championships. That way, the Red Wings now want to mimic the Lightning, and it doesn’t matter if their roster isn’t ready yet.

“Yes, we were in different situations [in Tampa]but we didn’t get to another level until we played like that, and to me that means whatever your staff is,” said Lalonde. Are you on top of plays? It’s kind of those details and habits that take you to the lead to victory, so those will be our goals.”