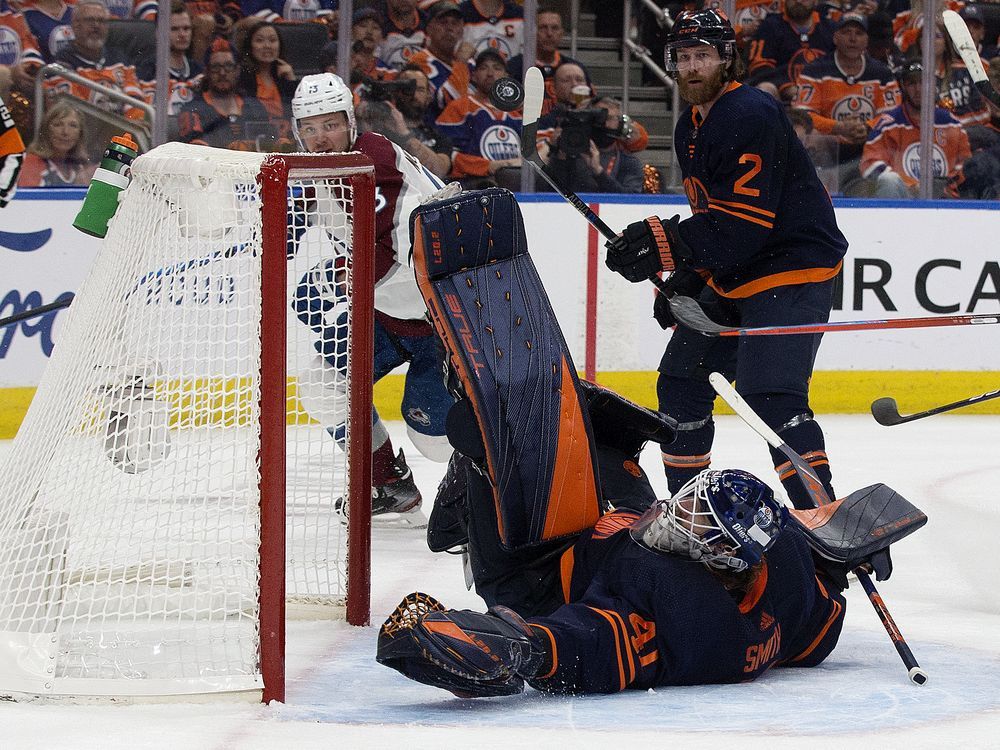 The Edmonton Oilers are considering a few roster changes these days. Not all of them are on the ice, although an important one is.

A busy Thursday of Oilers news included pending changes in goal, coaching staff and pro scouting. Let’s go into each one briefly.

Big news on the ice, where? Mike Smith has reportedly reached his decision:

According to Darren Dreger, Mike Smith will likely go on LTIR for the remainder of his contract. He adds that the Netherlands will dive deep into the free-agent pool with an interest in Ville Husso and Jack Campbell.

Smith missed most of the first 4 months of the season with an injury, then forced himself through the last 4, including a playoff run to the conference finals. But once that final game came to an end, there were immediate indications that it may have been the 40-year-old stopper’s last hoop.

Smith still has a year left on his contract, but it sounds like he’s played his last NHL game of what turned out to be a pretty phenomenal career. 16 NHL seasons, 677 GP, career savings percentage of 0.912 (and 0.924 in the playoffs), 1 win away from #300. Beyond the numbers, a fiery character with an excellent visual game, albeit sometimes between clenched fingers. Whatever you might say about Mike Smith, he was never dull.

Now the talk is about replacing him on the active roster, with UFAs Ville Husson and Jack Campbell waiting to be named. I wonder if Ken Holland might also be checking who can be taken over by the trade route, especially if the Oilers have dangling names like Tyson Barrie and Jesse Puljujarvic on the market as it has been rumors†

There are further changes in the composition of the assistant coaching staff. TSN‘s Darren Dreger reports:

There will be some changes in the Oilers coaching staff. Brian Wiseman continues and has a lot of interest from different teams. Gulutzan and Manson expected to stay on to assist Jay Woodcroft.

No formal announcements yet, but Dreger tweets about Brian Wiseman’s impending departure as a… accomplished fact. Perhaps best known for scoring 413 goals in one season to break Wayne Gretzky’s new scoring record, Wiseman later played and coached at the University of Michigan before joining Dave Tippett’s Edmonton staff in 2019.

Meanwhile, Dave Manson and Glen Gulutzan’s contract renewals appear to be on track, even if the preocess is taking a little longer than one might expect. The same can, of course, be said of Jay Woodcroft’s formal appointment, which took a week or so longer than some expected, though it always seemed inevitable. The same can be said of the primary assistants, especially Manson, who has been Woodcroft’s right-hand man at Bakersfield and Edmonton for the past four seasons, with the two men being promoted to the NHL club at the same time last February.

Daniel Nugent-Bowman from the athletic update:

Manson and Gulutzan contracts need to be finalized. I was told that there is an outside opportunity that Wiseman could remain with the organization in another capacity. TBD https://t.co/NJbsemr31Z

Another veteran hockey player has announced his retirement outright. Archie Henderson, director of Pro Scouting, will step down after the upcoming NHL Draft next Thursday-Friday 07-08, if reported by means of Sports net‘s Mark Spector.

A gentle giant of a man listed at 6’6, 220 pounds, Henderson, 65, has spent a lifetime in the game. That includes an 11-year professional career with 12 teams in 4 different leagues, including the 1984-85 Nova Scotia Oilers. A feared enforcer, Calgary-born Henderson racked up 3,187 penalty minutes in 773 pro games. He consistently averaged 4 PiM per game across all competitions, as evidenced by his 92 penalty minutes in 23 NHL games spanning Washington Capitals, Minnesota North Stars and Hartford Whalers. In the meantime, he also managed to score 3 goals in a big league uni. Fair to say he earned them the hard way.

Henderson spent 5 seasons as head coach in 4 more leagues before transitioning to Scouting in the mid-90s. He joined Ken Holland’s staff in Detroit in 2015 and rejoined the GM in Edmonton as Director of Pro Scouting.

It’s never clear who is responsible for the various hits and misses that inevitably accrue to Scouting personnel (or GM for that matter), and according to Henderson, the Oilers had had enough of both. Here’s a list of established pros acquired as free agents or through trade over those 3 seasons that really suited the Oilers. Names only, I leave it to the reader to form your own opinion about these acquisitions and about the group as a whole.

That’s 28 different players, almost 10 per season who were new to the organization. Obviously, there’s a wide range of expectations, from high-profile signings by free agents to PTOs that are well-made.

No formal word on who will step into Henderson’s role, even as Spector touts Brad Holland as a candidate. While that name will no doubt evoke groans of “nepotism” from some quarters, the Oilers’ GM’s son has a street name of his own. Colleague Kurt Leavins as long as this background a while back:

Holland the Younger was part of the club’s professional scouting division for the same 3 years as Henderson. The 41-year-old has been noted by various sources as having a modern, analytical approach, something the club believes are desperately in need of this observer.

It is by no means certain. As Spector reports:

Whichever way he chooses, it sounds like there’s an upward trajectory in the cards.

Finally, this item from a radio hit by TSNChris Johnson:

According to Chris Johnston, there is still no grip on a contract extension for Evander Kane. Johnston also reports that there have been talks with Brett Kulak about a contract extension. He adds that a return to Montreal is also a possibility for Kulak.

Difficult to provide any traction for Evander Kane until his complaint with San Jose is resolved, either by arbitration or settlement. Sounds like Edmonton’s other major UFA, Brett Earmay have options to weigh, even though the Oilers are the only team that can officially negotiate with him before July 13.

Recently at the Cult of Hockey

Sign up to receive daily news from the Edmonton Journal, a division of Postmedia Network Inc.

The next issue of Edmonton Journal Headline News will be in your inbox soon.