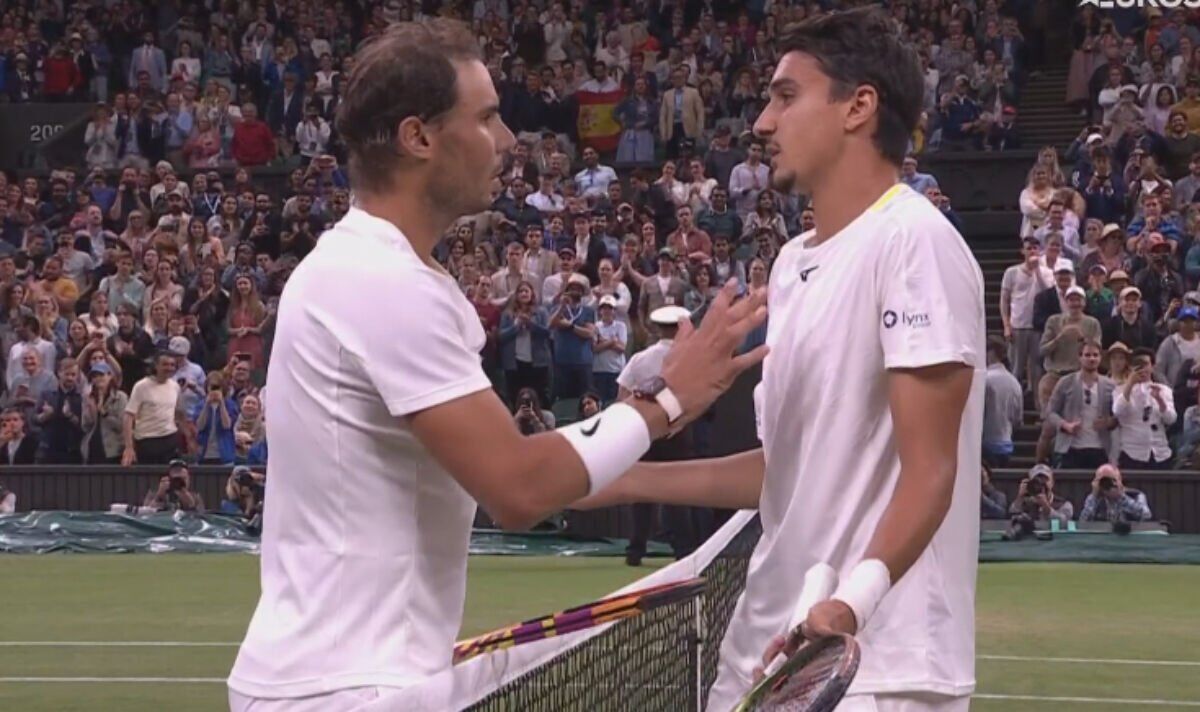 Rafael Nadal called Lorenzo Sonego, his Wimbledon opponent in the third round, to the net on Saturday because he disagreed with the Italian’s calls to turn on the lights and close the roof. The pair then had another lengthy discussion after Nadal sealed his straight-set win and secured his spot in the round of 16.

The problem started when Nadal hit Sonego on the head, prompting the Italian to ask for the lights to be turned on at 3-1 in the final set. The roof eventually closed at 4-2, prompting a frustrated response from the Spaniard eager to get the job done.

“He wants to get this done,” the commentator said. “It would be a bit rich as Nadal likes to take his time but we are not arguing here like on Court 1. Nadal is not happy, it is earlier than usual. Nadal is actually questioning this. He feels like Sonego has this dictated.”

After the restart, Sonego won two games on the spin to make it 4-4. Unusually, Nadal then called his opponent to the net where they had a heated exchange, causing the umpire to get involved.

NOT MISSING: Nick Kyrgios refuses to play, calls for Stefanos Tsitsipas to be kicked out of Wimbledon

“This is interesting, he wants a word,” the commenter added. “That’s great. I’m very surprised that Rafa took it on and it just shows that he lost his serve to love. He called his opponent to him and if I were Lorenzo Senogo I would be pretty to be offended.”

Nadal then rediscovered his momentum to win the last two games and finish the game. And he made it look relatively easy too, coming 6-1 6-2 6-4 to take his first straight-set win of the tournament, but the purse came back together once the result was confirmed and the discussion was clearly broader than the usual handshakes and formalities.

However, the 22-time Grand Slam champion shed light on the incident during his post-match interview, insisting that he did not intentionally escalate the situation. “Sorry, not spicy at all,” he said. “I’m really sorry now if I bothered him. I just wanted to tell him something. I did it in a nice way, but now I feel really bad if I bother him. I’m going to talk to him now.”

Nadal will now prepare to face Dutchman Botic van de Zandschulp in the fourth round – his highest placed opponent to date. The 26-year-old has beaten the likes of Feliciano Lopez and Richard Gasquet to get this far, and is likely to pass a rigorous test.

Looking further into the future, he could be on a collision course to face Australian sensational Nick Kyrgios in the semi-finals. Kyrgios defeated fourth seed Stefanos Tsitsipas in a fiery encounter on Saturday and it looks set to be a tough draw for anyone who crosses him.