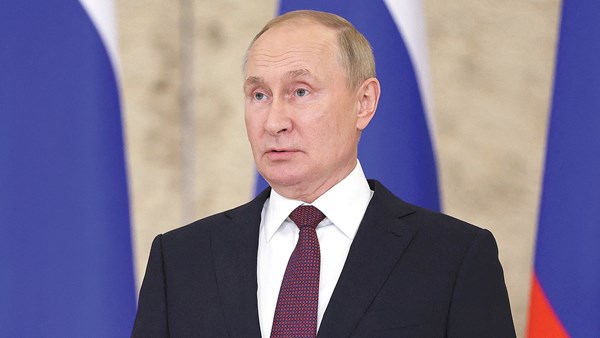 Russian President Vladimir Putin tried to downplay the importance of a surprise counterattack from Ukraine with a smile on his face, on the sidelines of a regional summit in which he participates, but warned that Russia would react more forcefully if its forces came under more pressure to stand .
In comments after the Shanghai Cooperation Organization summit in Samarkand, Uzbekistan, Putin said the attack was necessary to prevent what he described as a “Western plot to break up Russia”.
He added that Moscow is in no rush in Ukraine and that the objectives remain unchanged.
“The Kiev authorities have announced that they are launching a counter-attack,” Putin said with a smile. “Well, let’s see how it goes and how it ends.”
It was his first public comment on the withdrawal of Russian troops in the Kharkiv region of northeastern Ukraine a week ago.
“The Russian armed forces have recently carried out some sensitive attacks, let’s say as a warning, and if the situation continues like this, the response will be more dangerous,” he added.
Putin also said Russia is gradually imposing its control over new areas in Ukraine, stressing that Russia is in no rush to end its military campaign.
In response to a question as to whether the “military special operation” should correct course, he said, “The plan cannot be changed.”
“The main goal is to liberate the entire territory of Donbass,” he added.
Putin praised the efforts of his Turkish counterpart Recep Tayyip Erdogan to end the fighting in Ukraine, but said Ukrainian President Volodymyr Zelensky was not ready for peace talks.
The Russian president demanded a solution to the remaining problems with the export of Russian fertilizers and the lifting of restrictions imposed by Western sanctions on the export of fertilizers from Belarus. Putin told reporters that Russian fertilizer exporters had problems with shipping and insurance.
He denied his country’s connection to Europe’s energy crisis, saying that if the European Union countries wanted more gas, they should ask Ukraine to open pipelines and lift sanctions that prevent the opening of the Nord Stream 2 pipeline by the prevent the Baltic region. He stressed that Russia will fulfill its energy supply obligations.
In addition, on the sidelines of Indian Prime Minister Narendra Modi’s summit, Putin said he hoped the conflict in Ukraine would end soon, and expressed his understanding of India’s concern over the fighting.