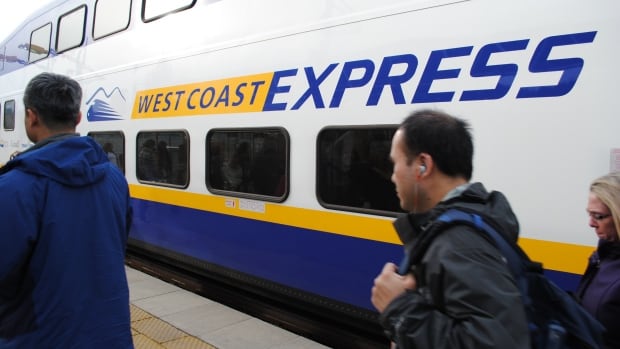 A group of Metro Vancouver mayors and other politicians join the call for expanded train service for the West Coast Express, which runs between Mission, BC and Downtown Vancouver.

On Saturday, the politicians joined a group of residents at the Coquitlam Center West Coast Express (WCE) station, advocating for more trains to meet demand from the growing population outside Vancouver’s core.

“The West Coast Express was commissioned in November 1995. So 27 years have passed and not much has changed,” said Harvey Su, a resident of Coquitlam and the founder of the WCE Expansion Association.

The WCE is a commuter train that historically only runs on weekdays during rush hour.

All trains arrive at Vancouver’s Waterfront Station before 9am. The first train to leave Vancouver on the way back to Mission is at 3:50 PM and the last to leave is at 6:20 PM

During the pandemic, TransLink has reduced its service to three trains. Now, with only 40 percent passengers still compared to pre-pandemic levels, only four trains run along the 70-kilometer route.

Su would like to travel to work in Downtown Vancouver on the WCE, but says the limited train schedule makes it impossible for him.

“The last train leaving Coquitlam Center leaves at 8:10am,” he said. ‘I have two daughters. I have to drop them off and after I drop them off, the train is gone.’

He says rider numbers are low because the WCE schedule isn’t convenient for people who want to watch a late-night sports game in Vancouver on the weekend, or breweries in Port Moody on a weekend.

So far, Su, who is running for Coquitlam City Council, has received support from the mayors of Port Moody, Port Coquitlam and Coquitlam.

“There are many residents of our community who want to travel to Vancouver or elsewhere in our area outside of the weekday rush hour,” said Coquitlam Mayor Richard Stewart at Saturday’s event.

In an emailed statement to CBC News, TransLink said it appreciates any effort to advocate for expanded public transportation.

TransLink says that starting September 12, one car will be added to each of the two busiest WCE trains, bringing the total car capacity to 23.

However, the carrier says there are currently no plans to expand the service further.

“TransLink is monitoring WCE drivership to determine a long-term strategy for the service and to evaluate its role as a regional passenger rail system,” the statement reads.

TransLink says it has limited control over the use of the railway lines owned by CP Rail.

“I don’t know if it’s possible to get an extended line [service]Stewart said on Saturday. “It’s a CP line mainly used for freight.”

CBC News contacted CP Rail but received no response in time for publication.