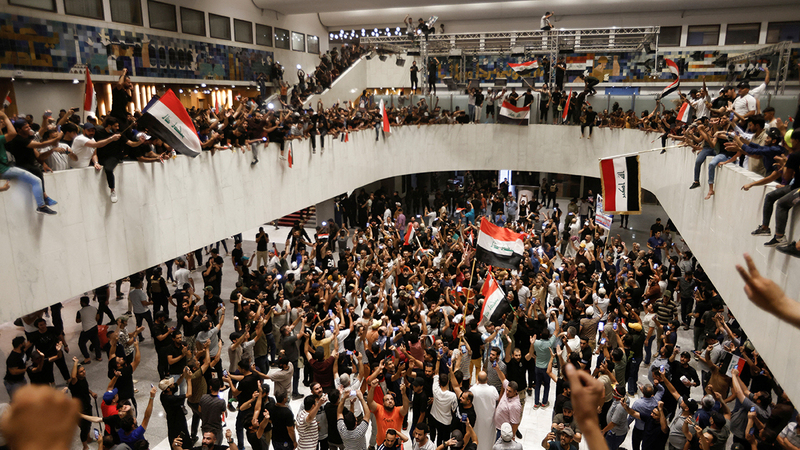 Yesterday Iraqi protesters stormed the fortified Green Zone in central Baghdad, which includes government institutions and foreign embassies, and managed to enter the parliament building after hundreds of them, supporters of the sadistic movement, protested against Sadr’s political candidate. opponents in the coordination framework for Prime Minister Mohammed Sudanese madness. Meanwhile, Prime Minister Mustafa Al-Kadhimi in a statement called on protesters to “abide by their peacefulness… withdraw from the Green Zone.”

In detail, a security source said that “the protesters entered the Green Zone and tried to reach parliament”, and to stop them “the security forces fired tear gas at them”.

Despite this, “protesters have managed to break into the parliament building,” the same source said.

The protesters spread into the halls of parliament, chanting slogans in support of Muqtada al-Sadr.

Large numbers of protesters were stationed in the halls of parliament, carrying photos of al-Sadr and Iraqi flags, chanting slogans in support of al-Sadr.

They also called for the system to change from a parliamentary to a presidential system by the people directly electing the president, which would be by ending the current political process and forming a transitional government for a two-year term.

Iraqi Prime Minister Mustafa Al-Kazemi, Commander-in-Chief of the Armed Forces, last night called on protesters to abide by their peace, preserve public and private property and follow the instructions of the security forces responsible for protecting them according to rules and laws, and immediately withdraw from the Green Zone.

“The security forces will work to protect state institutions and international missions and prevent disruption of security and order,” he said in a press statement.

Security forces initially tried to prevent the protesters from storming the Green Zone by shooting water at them.

A security source said three protesters were injured in the Green Zone.

The demonstration started yesterday afternoon from Tahrir Square in the center of the capital, where protesters raised Iraqi flags and photographs of the leader of the sadistic movement, Muqtada al-Sadr, and expressed their refusal to allow the coordinating cadres, Muhammad Shia al-Sadr, to to submit. Sudani, for Prime Minister, and then they went over the Republic Bridge to the gates of the Green Zone.

Registering injuries among the protesters in the Green Zone.