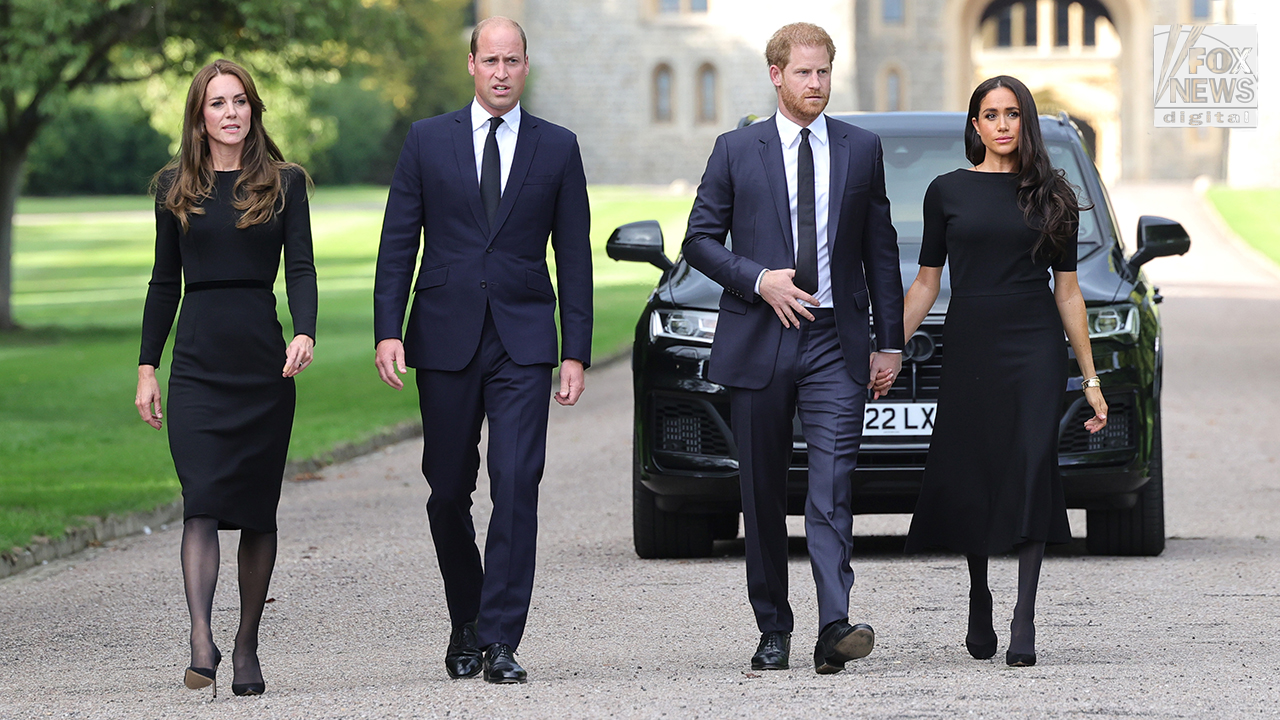 Prince William and Kate Middleton were joined by Prince Harry and Meghan Markle for a walk outside Windsor Castle.

The crowd of spectators erupted into cheers and applause as the foursome walked out of the gate together on Saturday.

Despite strained relations between the couples, the joint appearance marked a united front in the wake of Queen Elizabeth II’s death at the age of 96 on Thursday.

Prince William and Kate Middleton were joined by Prince Harry and Meghan Markle for a surprise performance outside Windsor Castle.
(Chris Jackson/WPA/Pool/Getty Images)

The brothers were both dressed in navy suits with dark ties, while their wives wore black dresses. The four walked side by side as they looked at the piles of flowers, notes and tributes left outside the gate by the public.

MEGHAN MARKLE’S ABSENCE IN SCOTLAND PROBABLY DUE TO KATE MIDDLETON’S DECISION TO STAY BEHIND, EXPERT SAYS

The Sussexes held hands and at one point put their arms around each other. Kate watched her gently pat William on the back during the outing.

William, 40, and Kate, 40, who recently received the titles of Prince and Princess of Wales, and Prince Harry, 37, and Duchess Meghan, 41, then walked to the barricades to greet the mourners. William and Harry were chatting at one point before going their separate ways to talk to their supporters.

Kensington Palace told People magazine that William had invited Harry and Meghan to join him and Kate on the outing.

A source told the outlet that security was unaware that both couples would be showing up together.

Despite arriving in separate cars outside the castle, the foursome left together in a car driven by William.

Royal journalist Omid Scobie tweeted: “The Waleses were always scheduled to greet well-wishers at Windsor Castle, but royal sources say the decision to invite the Sussexes was taken at the 11th hour.

“It is without a doubt an important moment in the history of the relationship between the two brothers.”

He shared a video of the reunion in another tweet, writing: “After more than 40 minutes of talking, hugging and sharing condolences with members of the public, the Prince and Princess of Wales and the Duke and Duchess of Sussex have returned to the Windsor. Together estate.”

The performance marked the first time the couples were seen together since the Commonwealth Day Service in March 2020. Tensions between the four have been simmering since Harry and Meghan resigned their royal roles in 2020.

The feud has reportedly been compounded by accusations of racism against an unnamed member of the royal family made by Harry and Meghan in a 2021 television special hosted by Oprah Winfrey.

Learning of the Queen’s serious condition on Thursday, the brothers took separate flights to Balmoral Castle. Prince William was accompanied by Prince Andrew, Prince Edward and Edward’s wife Sophie, Countess of Essex on a Royal Air Force Jet while Harry took a flight on a commercially leased aircraft.

Royal reporter Neil Sean expressed doubts that the joint appearance meant that relations between the couples had been fully restored.

He told Fox News Digital: “This came as a shock to many, as much as it was urged by King Charles as a form of unity. Not trust, but a united front and as many will see Meghan played the understated royal role.”

Sean continued: “However, the crowd was receptive, which was astonishing considering what she has said about the media and the British public. If we go further, this may come back to haunt the beginning of King Charles’s reign as the British just don’t trust both Harry and Meghan.”

The last time the four were seen together at the Commonwealth Day Service 2020 in March 2020 in London, England.
(Photo by Phil Harris – WPA Pool/Getty Images)

“Even now we’re wondering if this is all going to end up in some sort of reality TV show,” he added. “If this is her second chance, we’re stunned, but let’s face it. This is a woman who dumped her own family and father and recently stated that Harry lost his too.”

He noted that the appearance showed “nothing” but the courtesy of William and Kate.

“Is this the ice that is thawing? Not according to my sources, but in this difficult time the British royals have shown that they are the bigger person. Can Meghan forgive the royals now, that’s what she only printed last week .”

He noted that there was “no body language” between Kate and Meghan, which he said was the “bigger problem”.

“The story is far from over,” Sean concluded.

Ashley Hume is an entertainment writer for Fox News Digital. Story tips can be sent to [email protected] and on Twitter: @ashleyhume