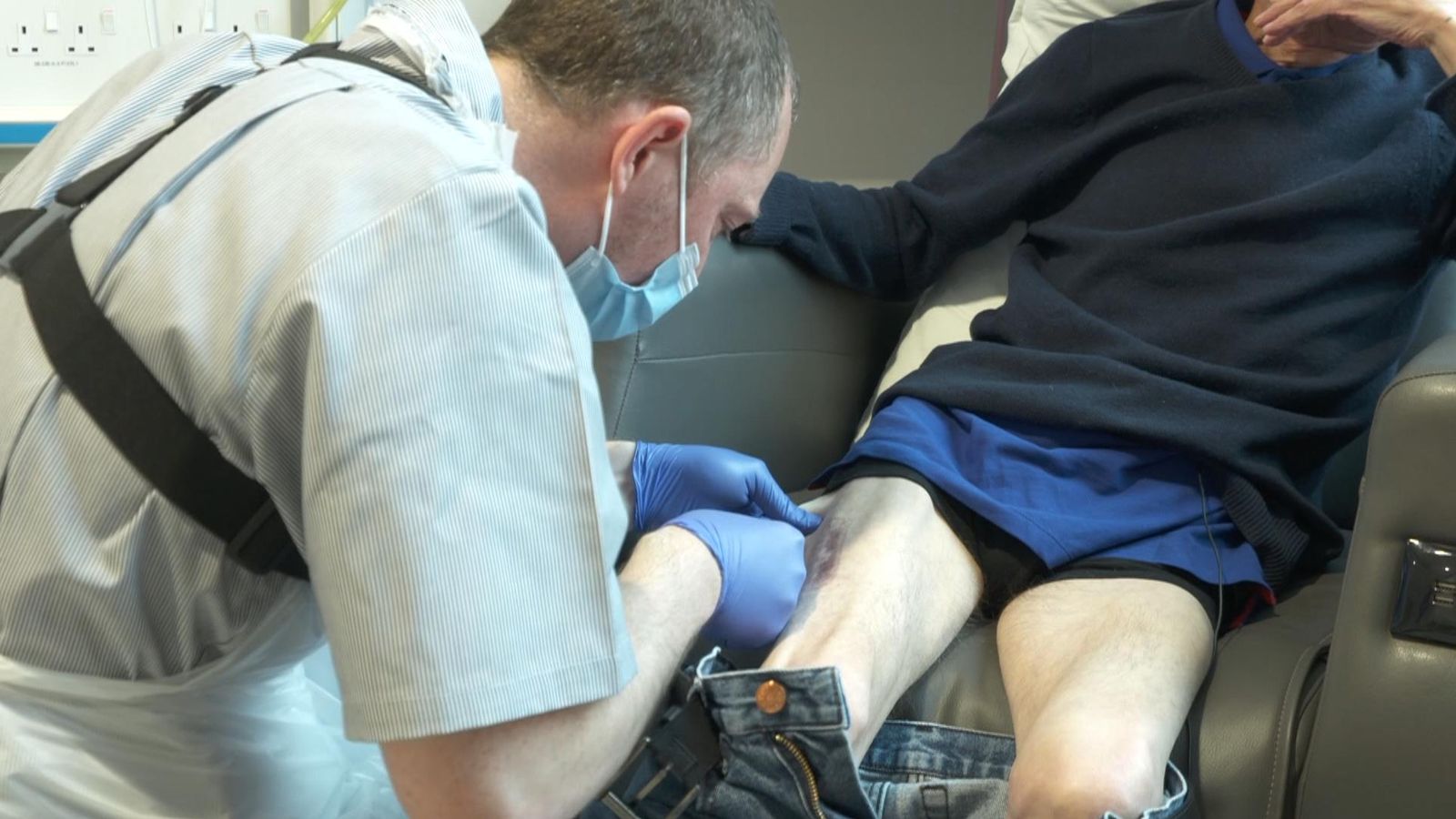 A personalized cancer vaccine made from individual patients’ own DNA has shown “very hopeful” early results.

The groundbreaking jab, made using technology perfected in the COVID pandemic, is given to patients after they have completed conventional treatment for head and neck cancer. Patients have a high chance that the cancer will return.

Preliminary data from a clinical trial being conducted at the Clatterbridge Cancer Center shows that none of the first eight patients who received the injection relapsed, even after several months.

But the cancer has returned in two of the eight patients who had not been immunized.

The numbers are far too small to draw firm statistical conclusions.

But Professor Christian Ottensmeier, a medical oncologist and director of clinical research at the center, told Sky News he was “cautiously optimistic.”

“I’m really hopeful, yes,” he said. “I’m pretty excited about it. All the data points in the right direction.”

A small clinical trial of the vaccine in ovarian cancer patients in France and the US is also showing promising results.

How does the vaccine work?

The jab, codenamed TG4050, was made by a French company called Transgene using similar technology that produced AstraZeneca’s COVID Vaccine†

DNA from an individual patient’s tumor is cut and pasted into a harmless virus.

When the genetically modified virus is injected into the body, it trains the immune system to guard against cancer cells, hopefully destroying them early on before there is even a lump.

“The immune system can see things that we can’t see on scans,” says Prof. Ottensmeier.

“It’s much smarter than humans.

“If we can train the immune system to pick those cells that would otherwise lead to a relapse at a time when we can’t even see them, then the long-term survival rates for our patients are much higher.”

Doctors are optimistic about the jab because it is so carefully tailored to a person’s cancer.

Mutations in the DNA of tumor cells vary between patients. By making a unique vaccine for each patient, it should be more effective at fighting rogue cells.

Sky News got permission to film Brian Wright receiving the 10th dose of his vaccine at the Clatterbridge. He still has 10 doses to go between now and January.

Mr. Wright underwent 16-hour surgery almost exactly a year ago to remove a tumor from the floor of his mouth and replace his lower jaw with bone from his leg. He then had several weeks of grueling radiotherapy.

He said the vaccine treatment had no side effects, but he had to be convinced to participate first.

“If you’ve had cancer in your throat,” he said, “and they say they’re going to inject that cancer into you, it just sounds… ‘oh no, you’re not.’

“But then they explained that it won’t give you cancer back, it will make your body immune to that cancer.”

Thirty patients are participating in the trial for head and neck cancer. Half will get the vaccine as soon as they are done with conventional treatment, the other half will not get it until they relapse.

The COVID pandemic has accelerated the development of vaccine technology that was once considered highly experimental.

The team of Oxford scientists that developed the AstraZeneca shot is using the same ‘viral vector’ strategy to target prostate cancer.

And the mRNA technique underlying the Pfizer and Moderna COVID vaccines has recently been used against pancreatic cancer with promising results.

Professor Adrian Hill, director of the Oxford team at the Jenner Institute, said: “The pandemic has helped and accelerated the development of a range of new vaccines.

“We learned about their safety from billions of people where it used to be in the thousands, and that’s useful safety data to have.

“And it means that much more will be invested in areas like cancer, where we urgently need better therapies.”