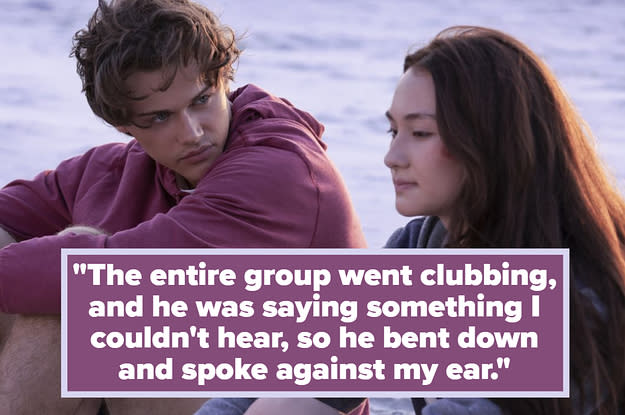 We all get turned on and turned off by certain things or people, but sometimes you don’t know what or who that is until you actually experience it in the moment. So when someone you don’t expect to turn you on does, it can be even more shocking and short circuit you.

So when you asked/AdAppropriate6975, “What did your friend do that accidentally turned you on?” a number of people came forward with their story:

1.“The whole group went clubbing. He said something I couldn’t hear. He bent over and spoke to my ear. In that second, I doubted our two-decade platonic relationship.”

“I didn’t even hear what he said.” —u/BitchIsLit

2.“I went to a friend’s house to play DnD. She made us all nachos and chicken. At the end I went to wash up so as not to leave her with all our mess. When I turned around, she put her hand on my chest, stared me straight in the eye and told me not to help. It wasn’t anything overtly sexy, but she held my gaze and held her hand on my chest just a little longer than expected. Anyway, we’re married now.”

“I know now that it was more than innocent for her. However, we had been friends for nine years at that point and during that time there was a lot of hugs / lap sitting / general friendly physical contact. However, this was the one that gave me the electrical tingles.

In nine years I had apparently been completely oblivious to all the previous attempts at flirting. I have no idea if I know when people attack me, it was mentioned in three separate speeches at my own wedding.” -u/gabjam

3.“We were joking, and she turned around, grabbed me by the neck and slightly strangled me.”

“I haven’t been the same since.” —u/axsirik

4.“They came to deliver food and medicine while I was sick. I was definitely not in the mood, but I wish I was.”

5.“We were drinking at a party and I got a chance. I said, ‘This one is going to fuck me.’ He looked straight at me and said softly, ‘Don’t worry, I’ll take care of you.'”

“I threw that shot right back.” —u/ms_ing

6.“She dropped me off at the airport. I said thank you, goodbye, and kissed her on the cheek before turning to get out of the car. When I got out she said, ‘Is that it?’ “I turned around, closed my eyes and suddenly my heart started to hurt. Suddenly I didn’t want to leave. We hugged, but it was the first time we did, it wasn’t as common as friends.”

“I remember holding her in the car, not wanting to let go, and having a wave of feelings I’d never let myself feel before. I remember when I got to my destination – I would visit my aunt for a few weeks – and my aunt said I seemed to be heartbroken.

I knew at that moment that I was in love with my best friend. We’ve been together since I got home and just celebrated our 18th anniversary.” -u/Veeksvoodo

7.“A girl I befriended on a high school field trip fell asleep on my shoulders on the drive back.”

“I’m still walking around on that memory.” -you/[deleted]

8.“I made a move one night to dance with a friend. I thought he was going to dunk me, but instead he made me spin. Still, my mistake was enough for him to notice, so he baptized me and said, ‘There, I’ got you this time.'”

“No right to be as hot as it was.” —u/InsideJokeQRD

9.“She did that thing girls do where they tilt their heads. She just listened to me while I talk about MRSA (we’re nursing students) and smiled a little, as she listened to me go deeper into the disease for a then, she tilted her head a little and kept her very pretty eyes straight on mine.That, mixed with the slight smile, caused my stomach to get knotted up and I just started stuttering like a fool. ‘

10.“She tackled me — not in a playful way either. She tried her best to take me down (and generally succeeded). We were always just friends, but those moments after we hit the ground, I felt I feel a little different sometimes.”

11.“I was pretty good, if not the best, friends with someone I never thought I’d be attracted to. We were at the bar one night and I was cold. He took his favorite jacket, put it over my shoulders and hugged me .”

“I got a feeling for him that I will never forget after that.” —u/Gizmotto

12.“I asked her outside a party if my eyeliner had run out. She took my jaw in her hands and gently but firmly turned my face back and forth to examine my makeup. Then she patted my cheek gently and said it was there. looked good. I couldn’t even thank her, I just nodded.”

“We moved on as I gathered myself, lol.” —u/anypebble

13.“He rolled up his sleeves and reversed perfectly. Yes, it was in a manual transmission car. Yes, he put his hand on the back of my seat.”

“It was a hot summer day, so he rolled up his sleeves before we got in the car.” —u/potential skin-8610

14.“I annoyed him, so he lifted me over his shoulder and sat me on the couch. No problem.”

“I was kind of hoping he would spank me after pushing me over his shoulder, but…” -u/Desperate-Exit692

15.“I am very tactile and he is not touchable with anyone else. However, he always pulled me to his side when we were outside and it was cold, would sit in my space during work meetings and put his hand on my bottom one when I walked in front of or next to him It wasn’t anything overtly sexual, but the fact that he didn’t do that to anyone else…”

16.“I went out for a drink with my boyfriend one night. A man I knew beat me, asked me to go home with him and was very aggressive. I turned him down and the man immediately turned on my boyfriend. He came in my boyfriend’s face and said it was his fault I didn’t go home with him and that he was a dick my boyfriend just stood and crossed his arms and told him to leave very calmly “And a firm voice. The drunk man eventually left, but it was so exciting to see my friend stay so level and calm in a tense situation, while I’m used to guys being so reactive.”

17.“It wasn’t necessarily exciting, but when I was in art school we went to a museum with a clown exhibition. One of my classmates – who I had had very little contact with – was afraid of clowns. At one point she made something scared, and she grabbed my arm. I was like, ‘I big monkey, I’ll keep the pretty lady safe.'”

“Dumb as it was, I was a little bit in love with her after that.” —u/lord_bubblewater

18.“She showed me how the tattoo on the back of her thigh moves as she bends over. I was 19 and she was wearing shorts. That was enough to make me blush.”

19.“A button fell on her shirt, exposing more tits than she’d ever shown around me. We ended up getting married. It was a happy coincidence.”

“We will also continue for 10 years.” —u/Chromeasshole

“That was fifteen years ago. I was just her bridesmaid at her wedding. I love her, but phew.’ —u/Bloodlust

22.“I was hanging out with some of my friends, and they all started kicking a ball around. I sat on the side by some cool flowers that I wanted to draw. I wasn’t paying attention, and at one point started the ball came to me one of the guys ran right in front of me – about an inch away from me – to stop it he then spent about five minutes checking if i was okay and then he gave pat me on the head.’

23.‘Called me sir. I didn’t even know this was exciting.’

24.“We both tried to grab the same cup and looked at each other.”

“We’ve been together for a while.” —u/caughtbydeercam

25.“‘Get your ass in the car, we’re going to get some Chinese food.’ He knew I wasn’t in a great frame of mind and we had been friends for a handful of years He drove me up when I wouldn’t tell him where I was After dinner he drove me to the store to get Nerf guns and we fought .”

So, did any of these make you scream? When was the last time a friend accidentally lit you? 😏 Let us know in the comments below!