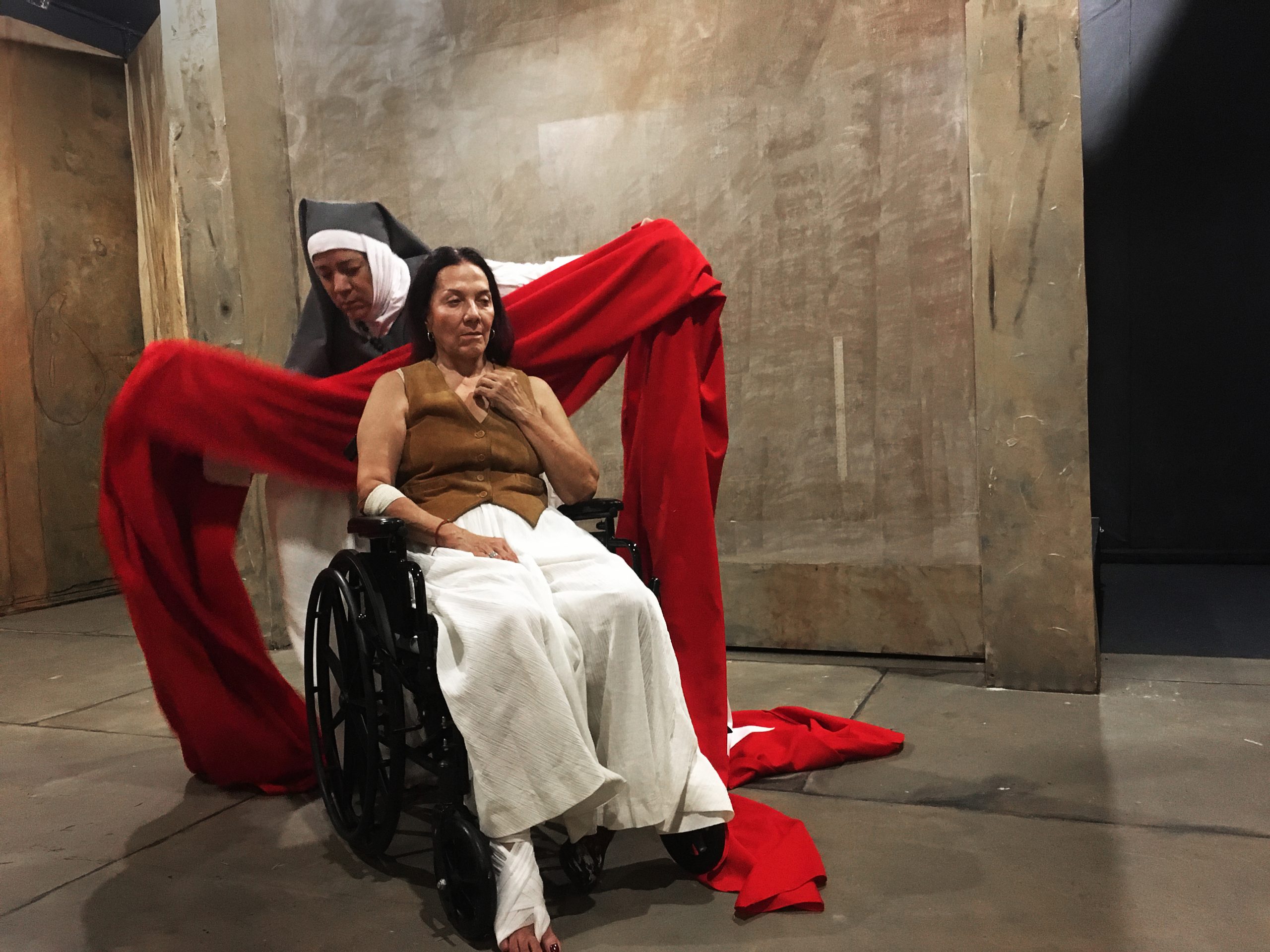 silk ribbons, written by Norge Espinoza Mendoza and directed by Sándor Menéndez, is set in a hospital on the eve of Día de los Muertos. The Painter (Aguijón co-artistic director Rosario Vargas) cradles empty bottles of wine in memory of her happier days past and works sporadically on a painting, while The Nun (Claudia Rentería) mediates between the fiery artist and the controlling doctor (Marcopolo Soto).

It’s clear who The Painter represents, even before starting a monologue about Leon Trotsky’s death. (Kahlo, who had once been lovers of the exiled Soviet revolutionary, was briefly suspected of being complicit in his murder by Ramón Mercader.) But the nun’s role is revealed more slowly and deliberately—appropriate, given Sor Juana’s real gifts hidden from historical considerations for centuries until Octavio Paz and others championed her as a major poet of the Spanish Golden Age and a proto-feminist.

The Painter paints The Nun, while The Nun talks about her secret writing. And The Doctor is a divided man – all matters and authority when he is in charge of his patient and his employee, but seen behind the canvas at the back of the playing field, a pitiful and possibly insane figure. When alone, The Painter draws a large red flag with the Communist hammer and sickle and drapes herself in it. She is isolated in her illness, but still dreams of a revolution.

The dimly lit, gray-walled hospital itself could be a relic of Mexican colonial times or of Sor Juana’s nun convent home. Is it a real place? Purgatory after death? The story teases both possibilities. (If you expect an afterlife like Pixar’s cocoa, which also featured Kahlo as an exuberant performance artist, you’ll be disappointed.) “There’s an epidemic going on,” The Nun told The Painter. (The real Sor Juana, forced to give up writing and selling her books, died of the plague in 1695 while caring for her fellow sisters.) But the epidemic of authoritarianism and patriarchy is also within its walls, and as the monologues of it make both women clearly, the cure for that is far from certain, and the disease has been dormant for centuries, both of church and state. Vargas and Peña play their roles with captivating chemistry, as solo dancers who learn to mirror each other’s movements. (Mirrors are also an important metaphor in this story.)

Beautiful visuals and poetic language surround and captivate us as the 90-minute show unfolds. Frida van Vargas describes “hummingbirds like children’s hearts floating in the air” around the gardens in her famous Casa Azul. The title translates as ‘silk ribbons’, referring to the luxurious material used to trim clothes, and it is an apt metaphor for how Mendoza structures the story of these women’s lives, in which small details add rich texture. Augusto Yanacopulos’ set (he also collaborated with Aguijón co-artistic director Marcela Muñoz on the effective dim lighting) captures the framed world where these two extraordinary women work out their final resistance (with a twist that won’t be revealed here). Live guitar music by Norberto Guerra González, sitting sideways in monk robes, adds a calm, mournful, reflective atmosphere.

This is not a piece about reclaiming women’s lives from the outside through straightforward biography. It’s about creating an atmosphere where we can feel what it would be like to live those lives – thwarted by disease, sexism and politics, but ultimately challenging and inflexible.