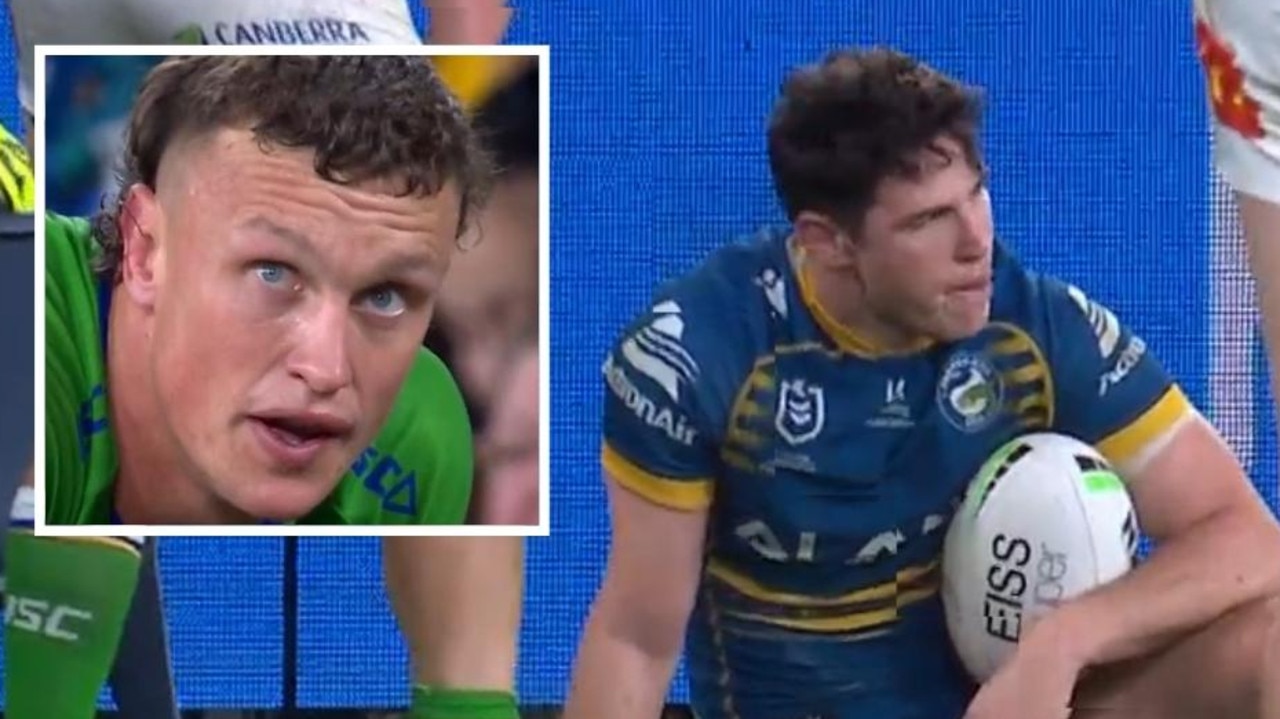 The NRL was plagued by milking allegations last weekend, but the league may have figured out how to weed out the ugly antics during Friday night’s semi-final at CommBank Stadium.

The Parramatta Eels secured their spot in next weekend’s preliminary final after crushing the Canberra Raiders by 36 points, while halfback Mitchell Moses put on a masterclass performance in Sydney’s west.

But the 28-year-old, who suffered a nasty headbutt against the Penrith Panthers last weekend, was charged with trying to draw a penalty after a bad collision with Raider’s five-eighth Jack Wighton in the 53rd minute.

Watch every match of the Rugby League World Cup LIVE and exclusively to Fox Sports, on Kayo. New to Kayo? Start your free trial now >

Instead of playing the ball, Moses lay on the grass, holding de Steeden under his arm and shaking his head.

“It didn’t look like anything illegal, but he fell hard.”

Moses received medical attention before an independent doctor ordered him off the field for a head injury assessment, which he endured.

The Lebanon international returned fifteen minutes later and helped the Eels to a convincing 40-4 victory.

Queensland rugby league icon Darren Lockyer warned that Moses’ ordeal provided a blueprint for how the NRL can prevent players from milking penalties.

“We’ve seen it in recent weeks,” he told Channel 9.

“Sometimes you get a blow to the head and you have a concussion and you come off the field. I think at other times we’ve seen players lie down and wait for the Bunker to be punished when they didn’t have any concussion symptoms.

“But you run the risk of getting fifteen minutes off the field.

“So I think this just tells the players that if you want to lie down and milk a penalty you have to leave for 15 minutes.”

“If they choose to stay on the ground, looking for a penalty, they risk leaving the field for at least 15 minutes.”

Debate raged in the rugby community after a record seven sin cans were handed out during Sunday’s final match between the Sydney Roosters and South Sydney Rabbitohs at Allianz Stadium.

Bulldogs general manager of football Phil Gould called out Rabbitohs fullback Latrell Mitchell, who was accused of trying to take a penalty after a tough tackle involving Rooster enforcer Jared Waerea-Hargreaves for repeatedly pleading with the referee to stop his opponents. to punish.

“There is a lot of talk about Parramatta and where they were, but the halfback has led the way, he has looked for clashes and he has led football.

“The kicking was great and he’s had some nice touches…which ties in beautifully with Dylan Brown.”

During the post-game press conference with reporters, Eels coach Brad Arthur admitted that he “hadn’t even thought of” keeping Moses off the field after his concussion.

The Eels have been hit and miss all season but made no mistake against the Raiders, romping for a dominant first half and finishing the game in front of a packed home crowd.

However, the challenge gets so much tougher for the Eels as the side travels to Townsville, a place Parramatta hasn’t won since 2017, to take it off against the North Queensland Cowboys after a week.

The last time the Eels advanced to the Preliminary Finals was the 2009 season where the side made the grand final against the Storm and lost the match which was eventually stripped from Melbourne amid the salary cap scandal.

It’s been a rough road for the Eels since then, but in recent seasons the flanks have been perennial finalists without many wins to show for it.

When he entered the game, there were questions about Arthur and his ability to end the drought of Eels’ 36-year premiership, especially as the side failed to make it to the third week of the final in Arthur’s eight-year-old tenure.

But now they have, the hoodoo ending in a dominant performance.