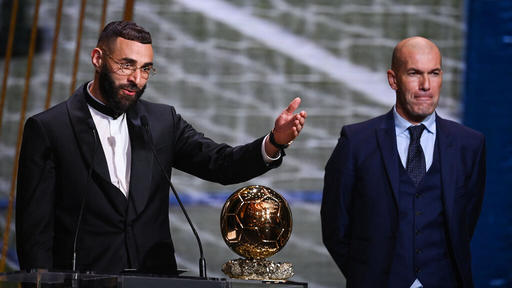 Benzema: I’m not Zidane or Ronald… and all my dreams have come true

League Plus – Real Madrid star Karim Benzema spoke about his comparison with Zinedine Zidane and Cristiano Ronaldo, the two legends of the Royal Club, after winning the award for the best player in the world.

Karim Benzema won the 2022 Golden Ball at the ceremony held last Monday in the French capital, Paris, for the first time in the 34-year-old star’s career.

Benzema said in statements to Real Madrid’s official channel: “5 Champions Leagues? It’s historic because we know how hard it is to get to the final. I’m not saying I’ll win it, but I’ll make it to the final. Champions win is very complicated. Real Madrid is the best club in history.”

He added: “Real Madrid is a club with a great history and that is why it is the best. Real Madrid will always win trophies.”

He continued: “I’m no better than Zidane or Ronaldo, we’re different, they’re great and I can’t do what they did on the pitch, but they’ve helped me a lot to improve.”

He continued: “I am not at the level of this duo. They have won the Ballon d’Or and I have won it, but it is difficult to reach their level.”

He continued: “I have fulfilled my three dreams, which is to buy a house for my mother, join Real Madrid because it is the best club in the world and finally win the Ballon d’Or. I am very proud of my work .”

Benzema concluded his statements by saying: “This year will be very good, not because I will score many goals or win trophies, but I see that the team and coach Carlo Ancelotti are excited to do something and this pushes the team to achieve what is required.”

Benzema won the 2022 Golden Ball after his brilliance last season, witnessing his participation in 46 games, scoring 44 goals and scoring 15, to lead the royal team to the triple league and super in Spain, alongside the Champions League.

Since the start of the current season, the veteran star has participated in 11 matches with Real Madrid in various competitions, scoring 6 goals and providing one assist.