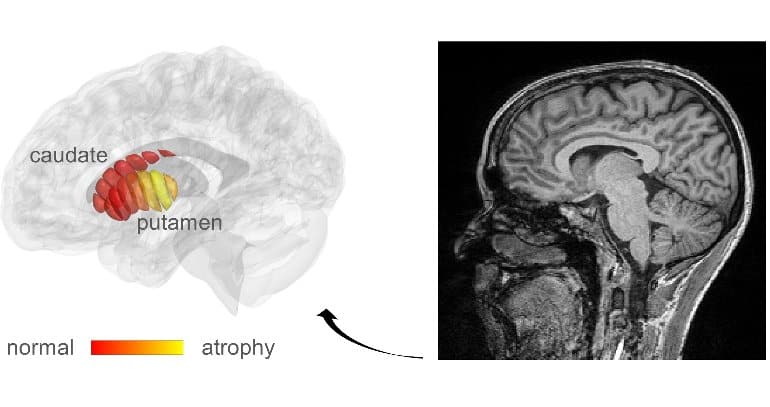 Overview: Cellular changes associated with Parkinson’s disease could be revealed using quantitative MRI that allows for a deeper examination of microstructures in the striatum.

Parkinson’s is a progressive and debilitating disease of the brain that eventually compromises patients’ ability to walk and even talk. The diagnosis is complex and impossible in the early stages.

The common method of visualizing brain structure uses a technique most of us are familiar with called MRI. However, it is not sensitive enough to reveal the biological changes taking place in the brains of Parkinson’s patients and is currently mainly used only to rule out other possible diagnoses.

The researchers from the Hebrew University of Jerusalem (HU), led by Professor Aviv Mezer, realized that the cellular changes in Parkinson’s could potentially be revealed by adapting a related technique known as quantitative MRI (qMRI). Their method has allowed them to look at microstructures in the part of the deep brain known as the striatum — an organ known to deteriorate as Parkinson’s disease progresses.

Using a new analysis method developed by Mezer’s PhD student, Elior Drori, biological changes in the basement tissue of the striatum were clearly revealed. In addition, they were able to show that these changes were related to the early stages of Parkinson’s disease and to patients’ movement disorders.

Their findings are published today in the journal Scientific progress.

qMRI achieves its sensitivity by taking multiple MRI images with different excitation energies, rather than taking the same image in different light colors. The HU researchers were able to uncover changes in tissue structure in different parts of the striatum with their qMRI analysis.

The structural sensitivity of these measurements could previously only be achieved in labs examining patients’ brain cells post-mortem, which is not an ideal situation for detecting early disease or monitoring drug efficacy.

“If you don’t have measurements, you don’t know what is normal and what is abnormal brain structure, and what changes as the disease progresses,” explains Mezer.

The new information will facilitate early diagnosis of the disease and provide “markers” for monitoring the efficacy of future drug therapies.

“What we have discovered,” he continued, “is the tip of the iceberg.”

It is a technique they are now going to expand to investigate microstructural changes in other brain regions. In addition, the team is now developing qMRI into a tool that can be used in a clinical setting. Mezer expects this to be about 3-5 years.

Drori further suggests that this type of analysis will make it possible to identify subgroups within the Parkinson’s disease population – some of whom may respond differently to some drugs than others.

Ultimately, he sees that this analysis “leads to personalized treatment, enabling future drug discovery, with each person getting the most appropriate drug.”

About this research news about Parkinson’s disease

Mapping structural spatial changes (i.e., gradients) in the striatum is essential for understanding the function of the basal ganglia in both health and disease.

We have developed a method to identify and quantify gradients of microstructure in the single human brain in vivo. We found spatial gradients in the putamen and caudate nucleus of the striatum that were robust across individuals, clinical conditions and datasets.

In patients with Parkinson’s disease (PD), we found abnormal gradients in the putamen, revealing changes in the posterior putamen that explain patients’ dopaminergic loss and motor dysfunction.

Our work provides a non-invasive approach to study the spatially varying structure-function relationship in the striatum in vivo, under normal aging and PD.