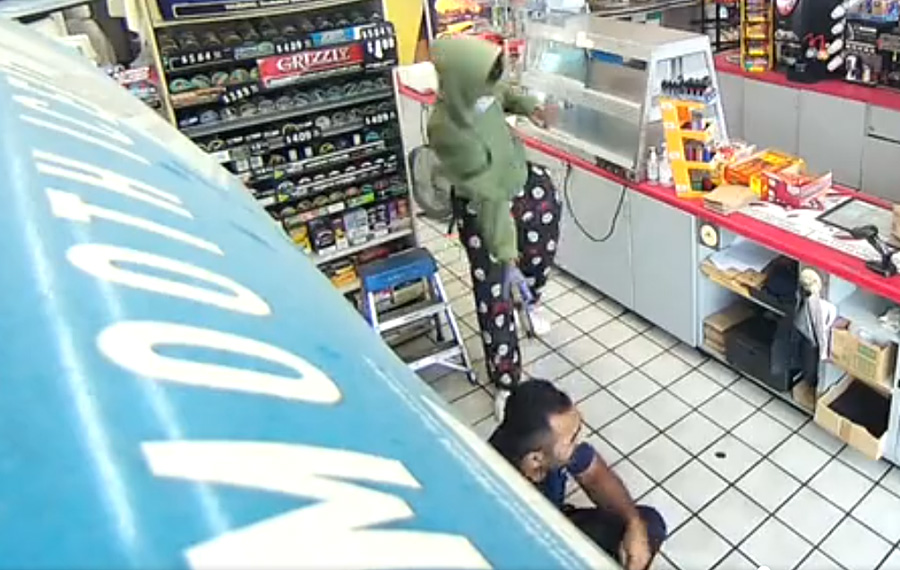 TUPELO, MS – A gruesome scene unfolded on surveillance video when an armed man who robbed a grocery store in Tupelo, Mississippi, cold-bloodedly executed an employee before leaving the establishment by shooting him in the head as he sat helplessly on the floor, though his victim cooperated fully with him at all times.

Chris Copeland, 26, has been turned into capital murder after he reportedly put his gun to the back of the head of Parmvir Singh, 33, and pulled the trigger numb after leaving the victim on the floor behind the counter of the Chevron Food Mart.

CCTV footage of the incident shows Copeland, wearing pajama bottoms, a hooded sweatshirt and a mask, enter the store and walk to the counter, at which point he pulls a gun from his waistband, points it at Singh and demands money from the till.

Singh remained accommodating throughout the encounter – to the point where he was described as: “merciful” by the police – even when the suspect demanded that the employee sit on the floor.

“The clerk is very friendly and even gave him a pile of money he didn’t ask for,” said Tupelo police detective Wes Kloac. “He opened the safe for him and handed him a bank bag.”

After Singh sat on the floor, Copeland jumps over the counter, then walked behind his victim and shot him in the head, seemingly for no reason; luckily Singh’s torso is hidden from view behind a counter at the moment, but blood spurting from his wound is sickeningly visible on camera.

“(The suspect) then ran after Mr Singh and executed him at close range,” Kloac said.

Kloac noted that Copeland — who has a criminal record consisting of multiple felonies for robberies and burglaries that prevented him from possessing a weapon — then picked up the used case, attempted to sabotage the store’s video-recording equipment, and then fled the scene.

Police Chief John Quaka said he struggles to remember a more callous and heartless act of violence in all his years on the job.

“With 27 years in law enforcement, this might be one of the worst I’ve ever seen,” he said. “The victim was literally executed in the back of his mind in his shop where he was trying to earn a living. It’s just absolutely outrageous. The prosecutor said it best…it’s monstrous.’

Copeland is currently being held without bond; if convicted of manslaughter, he will receive either the death penalty or life without parole.