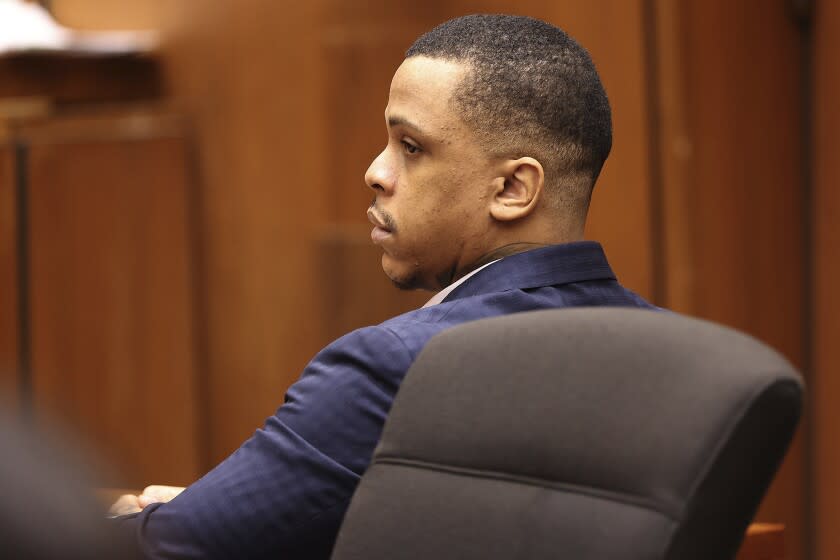 The man who admitted to killing rapper Nipsey Hussle in 2019 was attacked and slashed with a razor by two LA County inmates this week on his way to court, his attorney said.

Eric Holder Jr., 33, lost consciousness and needed three staples to close a wound in the back of his head after being jumped into a cell Tuesday morning while waiting to be brought to court, according to his attorney, Aaron Jansen .

When the jurors arrived in court on Tuesday, Los Angeles County Supreme Court Judge H. Clay Jacke told them the proceedings had been suspended due to an “unforeseen medical” incident involving Holder.

Holder was back in court on Wednesday, but with staples exposed in the back of his head and his face obscured by a covering for the first time in the trial.

Late Wednesday morning, Jansen told reporters in a courtroom hallway that his client had been assaulted while he was in a cell along with about 13 other inmates. Holder kept his head down and resting his eyes when he was hit from behind, Jansen said, adding that the men beat him and cut him with the razor.

Holder was taken to a hospital and suffered bruises and abrasions to his face in addition to the tear, Jansen said.

According to Jansen, the two attackers said nothing to Holder and a motive for the attack was not immediately clear. Despite the incident, Jansen said his client was “OK” to continue the process.

Both the prosecution and the defense rested their cases on Wednesday and the case is expected to be in the hands of a jury by the end of Thursday.

Hussle was signing autographs and speaking to fans in the parking lot of the Crenshaw Comic Strip Center where his Marathon Clothing store was housed when he met Holder on March 31, 2019.

Both men are members of the Crips’ Rollin 60s set that has long dominated the neighborhood. Hussle told Holder there was a rumor that he had cooperated in a police investigation, the kind of gossip that quickly turns deadly in gang circles, according to testimony given at the trial.

Holder returned moments later with two pistols and opened fire. Hussle was shot 11 times and died shortly after. Two other men were also injured. Holder was arrested two days later after the woman serving as his unwitting getaway driver turned herself in to police.

Jansen admitted that Holder committed the murder in his opening statement two weeks ago, but has argued that his client should be convicted of manslaughter, not murder.

Hussle’s comments about snitches left Holder “so furious and triggered” that he didn’t stop to consider his actions before opening fire, Jansen has argued. The attorney also said Holder had no intention of harming Kerry Lathan or Shermi Villanueva, the two men who were injured in the shooting but survived.

If convicted of murder and attempted murder, Holder would face a de facto life sentence.

Neither the District Attorney’s Office nor Deputy Dist. atty. John McKinney, who is pursuing the case, has commented on the attack on Holder. The prison assault went uncredited to the jury, and McKinney scolded Jansen on Wednesday for discussing the assault with reporters in the courthouse, fearing jurors would eavesdrop on it.

This story originally appeared in the Los Angeles Times.