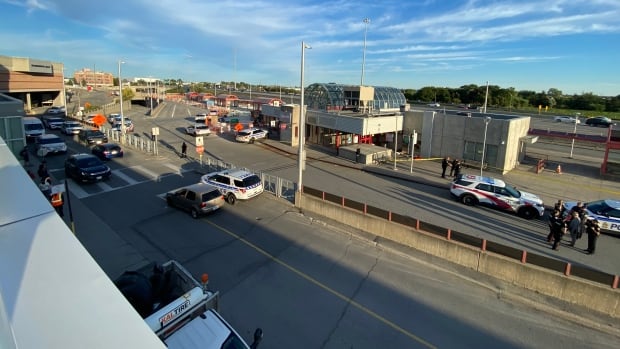 A man is dead and two others seriously injured after a stabbing near the St. Laurent Shopping Center on Friday afternoon, according to Ottawa police.

The victim was taken to the Civic campus of The Ottawa Hospital with life-threatening injuries and has since died.

Paramedics said the two injured men are in serious but stable condition and were also transported to the Civic campus trauma center.

Blood can be seen outside the shopping center near the bus station, where police cars line the road from early Friday evening.

Police said in a tweet that they received a call about a stabbing at the St. Laurent Shopping Center around 4:35 p.m.

A police operation is underway and the Homicide Division is investigating. Police are asking people to avoid the area, but say the area is safe.

OC Transpo tweeted that St-Laurent Station was closed. Trains are still passing through the LRT station, but will not stop, it said from 6 p.m.

A mall spokesperson said the mall and parking lot are open and operating normally.

“Our thoughts are with those affected by this unfortunate incident,” the spokesperson said in an email.

Bryon Statham, a shopper, said he is also thinking of commuters who may have witnessed the incident.

“There will be some people who have seen this who will be affected,” he said.

“To see this happen, so close, this didn’t happen at night, this happened in broad daylight … that’s rush hour,” he told CBC.