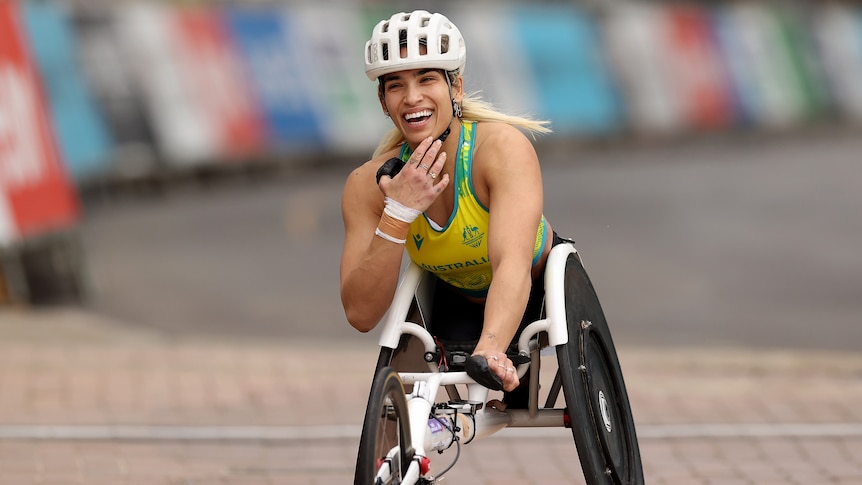 It looked easy, but in fact it was one of the most difficult victories of Madison de Rozario’s career.

The Australian dominated the T53/54 women’s marathon in Birmingham, winning in a Commonwealth Games record of 1 hour 56 minutes.

“Some races are difficult because of the actual race and how it goes strategically and tactically, and sometimes it’s just the 42km you get,” she told ABC Sport.

“Today it was during the course itself that got me. I bumped into a wall at about 27 [km] just because of the hills and the curves and it was incredibly complicated. But the energy there was unreal, so that certainly made up for it.”

Even more impressive is the fact that the Rozario’s seat was damaged in transit to Birmingham.

A quick fix was made so she could stabilize and steer correctly, but it was precarious, especially with her 1,500m defense yet to come.

“It’s now zip-fastened. We hoped it would hold up on the road, [but] we’re not sure how it will go on the track,” she said.

“Right now the whole stability of my race seat depends on about 3 millimeters of wire so I definitely kept an eye on it during that race.”

De Rozario said she spoke with support staff before the race to prepare for the worst-case scenario if the quick fix didn’t work.

“We’re going down those hills about 30 miles per hour, and that would be the worst time for some part of your seat to break. So I was like, ‘What should I watch out for? What are the warning signs? Will I know before it breaks? Will death just sneak up on me?’.”

It all went smoothly for the defending Commonwealth Games and Paralympic champion, who was one of only four athletes in the event, with two from Australia and two from England meaning no bronze medal was awarded at the event.

De Rozario said more could be done to prioritize the needs of women with disabilities in the sport, with planning the marathon ahead of track events making it difficult to attract a larger field of participants.

“It was an incredibly challenging marathon, when the track is a better place for medal opportunities,” she said.

“So there has to be the lived experiences of people making the decisions in those rooms.

“And hopefully Comm Games will come home again [Victoria 2026]can we keep both events and structure it so that we really have a full field and more opportunities so that athletes who are not able to make the Paralympic teams [have the] chance to get a taste of wheelchair racing, fall in love with it, see it and stay in it.”

De Rozario has to defend her title in the 1,500 meters on the track.

Dawes disappointed but driven to improve

Countryman Christie Dawes finished fourth and the seven-time Paralympic rider was then deflated.

“I usually do eight or nine marathons a year before COVID, and post-COVID I’ve done three in three years,” she said.

“I’m completely disappointed with my place, but you can’t let the pride get in the way, you just have to keep going.

“I just have to be happy with that, whether you’re first or last, you give 100 percent for it, I left nothing behind.”

Drama in men’s race with equipment failure from Weir

Pre-race favourite, England’s David Weir, was 90 seconds ahead of Smith with less than 10 kilometers to go when he suffered a flat tyre.

In an incredible show of dedication, one of the sport’s greats still pushed all the way to the finish line to finish seventh, nearly 25 minutes behind the winner.

“If Her Majesty the Queen is watching or listening, give him a knighthood. He deserves to be Sir David Weir,” Smith said.

“In the end I decided not to bring a spare… I should have gone with my instincts,” Weir said.

But not finishing the race was not an option.

“Where I’m from, on a municipal estate, I’m not giving up,” he said.