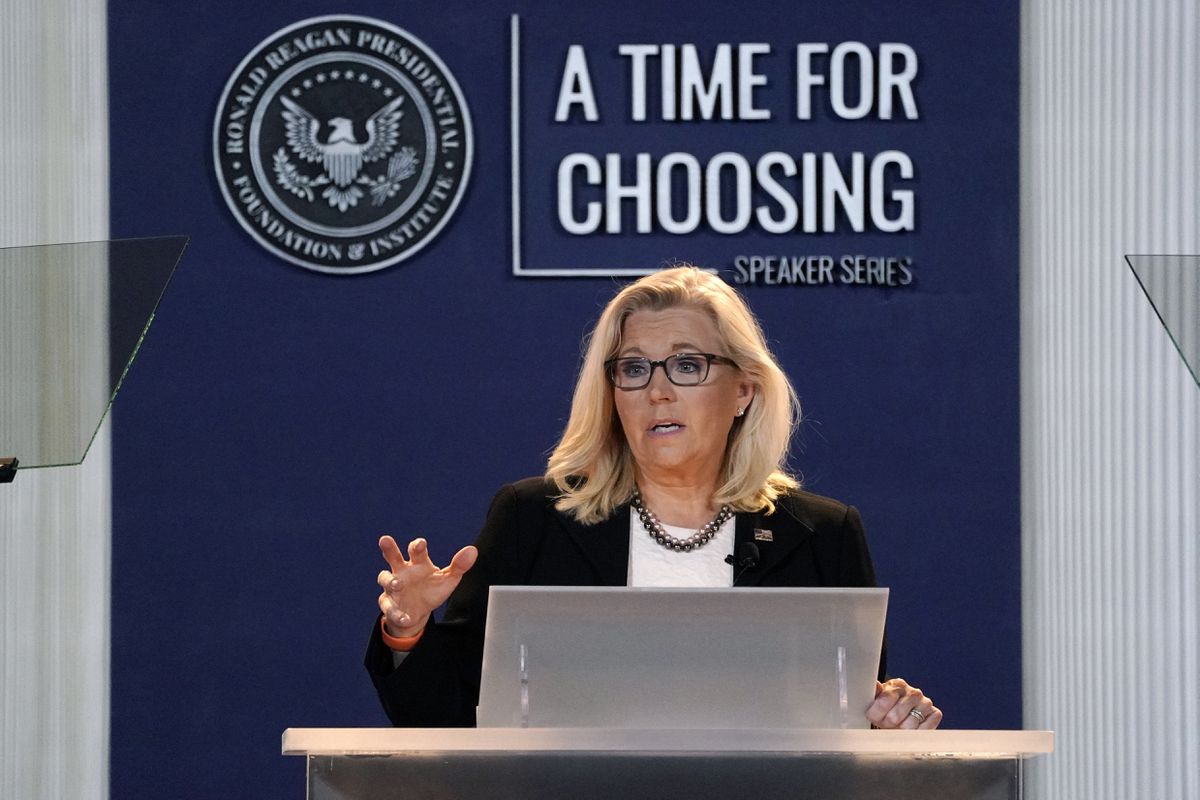 US Republican Representative Liz Cheney said on Wednesday that Donald Trump’s efforts to undo the 2020 election were “more chilling and threatening” than first thought, as he called on Republicans to choose between loyalty to Trump and the Constitution.

Cheney, a commanding presence on the congressional panel investigating the January 6, 2021 U.S. Capitol riot by Trump supporters, warned against falling into vicious partisan attacks that could tear the political fabric of the country and urged her to public to rise above politics.

“My fellow Americans, we are on the brink of an abyss and we must pull back,” said the 55-year-old daughter of former Vice President Dick Cheney in a speech at the Ronald Reagan Presidential Library in California’s Simi Valley. .

“As the full picture comes into view with the Jan. 6 commission, it has become clear that the efforts Donald Trump oversaw and made were even more chilling and threatening than we could have imagined,” Cheney said.

“We have to choose, because Republicans cannot be both loyal to Donald Trump and loyal to the Constitution,” she said. “We should not elect people who are more loyal to themselves or to power than to our constitution.”

By opposing Trump, Cheney has become a pariah in a Republican party that easily houses conservative con artists like Marjorie Taylor Greene and Lauren Boebert, both of Trump’s staunch allies.

After being ousted from the party leadership in the US House of Representatives, censored by the Republican National Committee and no longer recognized by her state party, Cheney faces a showdown against Trump in an August 16 Republican primary in her home state of Wyoming.

Trump has made her a prime target of his revenge campaign against his alleged Republican enemies, and she’s trailing Trump-backed Republican challenger Harriet Hageman in the polls.

In a speech that was punctuated by cheers and applause, Cheney praised the bravery of former White House aide Cassidy Hutchinson, who testified in a public hearing Tuesday that Trump knew the mob of supporters he had called to Washington were armed with guns. including assault style rifles. when he urged them to march to the Capitol and tried in vain to join them.

The crowd stormed the Capitol in an attempt to stop Congress from confirming Democratic President Joe Biden’s victory over Trump.

“Her superiors – men many years older, some of them – hide behind executive privilege, anonymity and intimidation. But her bravery and her patriotism yesterday were amazing to see,” Cheney said.

Hutchinson was a top aide to then White House Chief of Staff Mark Meadows. She testified about her discussions with him and with former White House attorney Pat Cipollone, who has now been subpoenaed by the committee.

Our Morning Update and Evening Update newsletters are written by Globe editors and give you a succinct summary of the day’s main headlines. Sign up today†