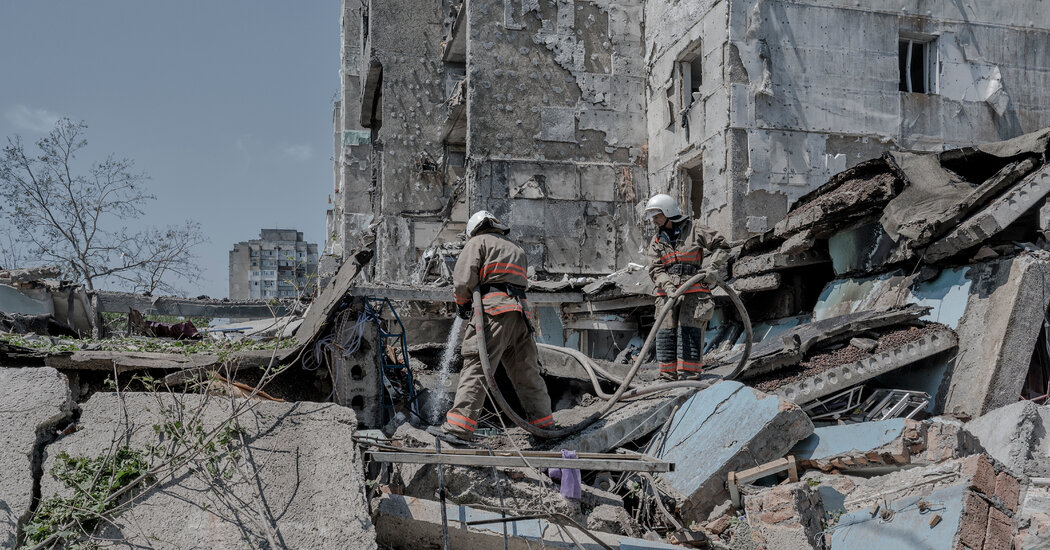 While Russia relies on overwhelming destructive power to drag a mile or two a day into eastern Ukraine, Ukrainian soldiers fighting some 400 miles to the south have worked steadily to reclaim Russian frontline positions across an expanse of steppes and swamps. eliminate.

Fighting is fierce on both fronts and how the two campaigns unfold is critical to understanding where the war stands as concerns grow that a prolonged conflict will bring new economic costs to Ukrainian allies.

Russia’s President Vladimir V. Putin said last week that he thought he would wait and see the West. While the Russian leader rarely acknowledges Russian losses or defeats, military analysts said his army’s attack has raised questions about whether it can sustain broad-based offensive operations after its campaign to take Luhansk province is over.

Russia has deployed most of its armed forces to capture Lysychansk, the last urban center in Luhansk still controlled by the Ukrainian government, and it could fall any day.

Russia has sent thousands of additional soldiers east in recent weeks to bolster its offensive in neighboring Donetsk province, where it is likely to try again to overwhelm the heavily fortified Ukrainian positions with its large arsenal of artillery, missiles and air forces, even if its ground troops are reduced.

How weakened each army is after more than four months of war is an open question. Kiev only releases rough estimates of its losses, and Moscow says next to nothing.

British defense chief Ben Wallace said last week that 25,000 Russian soldiers have been killed since the war started. The number, which could not be independently confirmed, is the highest estimate given by a senior Western official. The Ukrainian government has admitted to having suffered huge losses, with hundreds of casualties every day.

Even if Russia can penetrate Donetsk deeper, its military struggles to sustain an advance along multiple lines of attack in various parts of a country about the size of Texas.

The Russians’ defeat on Thursday at Snake Island in the Black Sea, where troops had been forced to withdraw under continued Ukrainian bombardment, underlined how reliant the Russians are on their superiority in heavy weapons.

The Russian withdrawal from the island was expected to undermine Moscow’s control of vital grain shipping routes from Odessa. And when Russian missiles on a residential building and a recreation center near Odessa killed at least 21 people on Friday, the Ukrainians considered it an act of revenge.

“This was revenge for the successful liberation of Snake Island,” Yevhen Yenin, the first deputy interior minister, said in an interview. He scoffed at Russian claims that leaving the island was a “goodwill gesture.”

With its forces stretched out, Russia has been trying for months to bolster its defensive positions in the south, where Ukraine has recaptured parts of the Kherson region west of the Dnieper River that Russia captured early in the war.

The Ukrainian military has said that Russians have been driven from defensive positions in several locations and that Ukrainian soldiers are operating within a 20-mile radius of the city of Kherson. A senior US Department of Defense official said last week that the Ukrainians not only recaptured villages but also demonstrated the ability to hold the recaptured terrain.

The Ukrainian army also claimed on Friday to have attacked Russian military targets near Kherson. “Our pilots operated in pairs and hit ammunition depots, a strong point and a cluster of enemy troops and equipment in the area of ​​Snihurivka, Blahodatne, Olhany and Davydiv Brid,” Southern Command said in a Facebook post, referring to villages to the north. of Kherson along the line of contact.

But military analysts have warned that, despite Ukraine’s gains in the south, it is unlikely they will be able to mount a wide-ranging offensive and soon capture the city of Kherson, the only provincial capital to fall to the Russians. Pull.