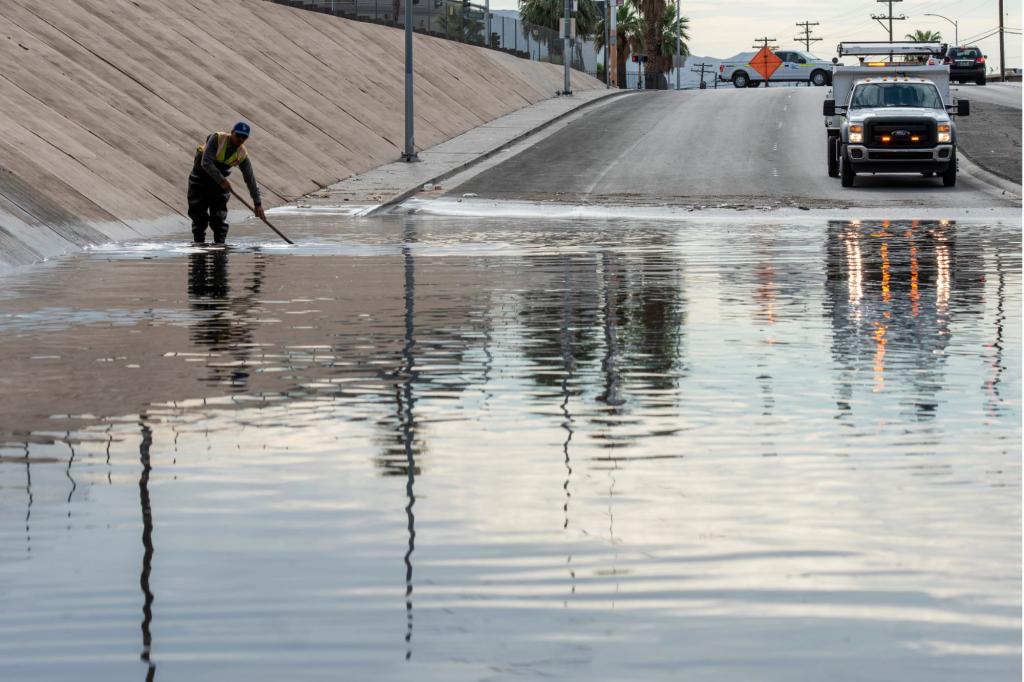 A day away from being hit by powerful storms that consumed casinos, airports and parking lots, Las Vegas is still experiencing a soggy start to the weekend.

Thursday night, the entire Strip, home to some of the world’s most famous casinos and hotels, was flooded when the city warned of a flash flood and a severe thunderstorm.

And it seems like the city isn’t out of the woods yet.

At least 16,000 people were affected by power outages in the Las Vegas area Friday night, according to the Las Vegas Review-Journal.

Rain fell in the city from afternoon to evening, with the possibility of gusts of wind, lightning and even small hail over the weekend.

On Friday, another severe thunderstorm warning was issued for Las Vegas, lasting until 11 p.m. People were urged not to drive through high water.

The warning affected Las Vegas and the surrounding cities of Henderson, Mesquite and Boulder City.

It is forecast to continue raining from noon on Saturday with a short break from the extreme weather before rains resume on Sunday afternoon, meaning more flooding problems may be on the way.

Saturday’s highs are expected to be in the high 90s, which is below the average of 105 for this time of year – a trend that could continue into next week.

Las Vegas Mayor Carolyn Goodman rushed to Twitter on Friday to thank emergency services for their prompt response to the flooding.

“Thank you to our first responders and Regional Flood Control for keeping residents and visitors safe,” she says tweeted. “Las Vegas has beautiful weather, but we do have big storms in the monsoon season. Knowing this, we have a flood management infrastructure to quickly move water from the city to Lake Mead.”

Thursday’s storm nearly matched the total amount of precipitation for the rest of the year. On social media videos, lightning flashed across the sky over Sin City, cars were left stranded and partially submerged on the street, and water poured in Caesars Palace of ceiling lamps.

Stay up to date with today’s most important news

“While some of our properties in Las Vegas suffered minor damage from last night’s storm, they are all operating normally today,” Caesars Entertainment told The Post. “Repairs are already underway and we don’t expect them to affect our guest experience.”

During the storm, seven people were rescued from fast water and a house caught fire, according to Las Vegas Fire & Rescue. There were also 22 accidents and 15 outdoor fires reported.

Alexander Wolf, a Las Vegas resident, told The Post that he saw “curtains” of rain outside his window.

“The lightning was almost constant and the power went out several times,” he told The Post. “Electric surges set off the fire alarms of several buildings, forcing firefighters into the storm to respond.”