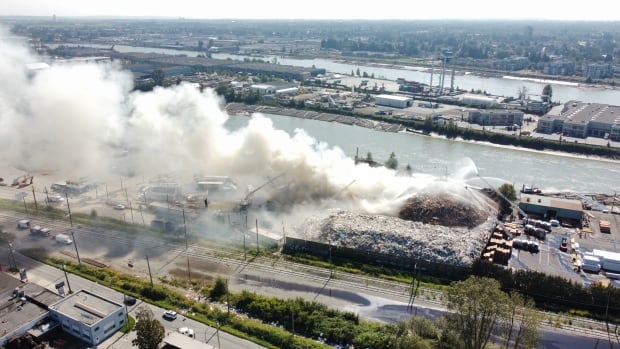 Officials are warning residents about air quality after a three-alarm fire broke out in an industrial area in South Vancouver on Saturday.

Officials say the fire broke out at a wood recycling facility near Ontario Street and Marine Drive around 2:30 a.m.

Acting Assistant Fire Chief Andy Greenwood said the fire was in a pile of wood waste in an industrial estate. A fire boat had to be deployed on the Fraser River in the early morning.

“We’re here all day,” Greenwood said Saturday morning. “We’re doing our best to get this under control. But meanwhile… close [your] windows if you can.”

Lots of heavy smoke in the river district this morning as our @VanFireRescueteams fight a third alarm fire.@CityofVancouver @IAFF18< /a>

Video of our #MERT Fireboat currently operating from the Fraser River side. pic.twitter.com/1stllnlU4n

On Saturday afternoon, Metro Vancouver issued an air quality advisory for the region and the Fraser Valley due to smoke from the blaze and from wildfires in the southern interior.

“Significant smoke…is trapped by an inversion close to the surface,” a spokesman for the regional district said.

This explains the heavy smoke development in South Vancouver this morning. Crews dealing with a fire near Ontario Street and the Fraser River. @CBCVancouver https://t. co/wC7AuRJ5Zw pic.twitter.com/MzLiEoJNx7

Investigators are now on site to determine the cause of the fire in the woodpile, Greenwood said. No injuries or threats to nearby businesses were reported.

“Any smoke is dangerous, especially for people with respiratory problems,” read a tweet from fire chief Karen Fry.

“Keep your windows closed, avoid being outside or exercising in the smoke.”

The Metro Vancouver spokesperson said smoke is more likely for people with chronic illnesses, pregnant people and infants, and the elderly. They said additional smoke is also likely to come from wildfires across the US border on Sunday.