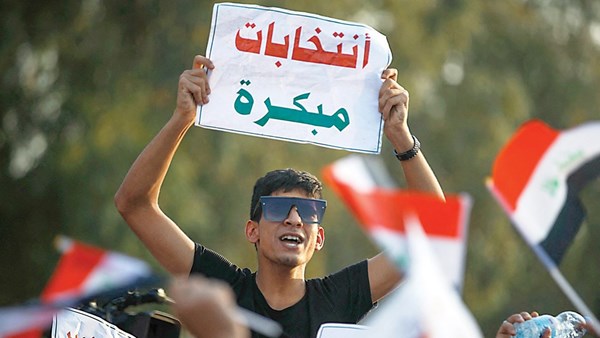 Re-election demands in Iraq surpassed the “Sadr movement”, becoming a demand from most political forces, with disagreements over the mechanisms for implementation and the date for holding it before or after the formation of the government. The most prominent question on the Iraqi political scene is whether the snap elections will resolve the long-exacerbated crisis or not.
Ayat Muzaffar Nouri, a specialist in political science and international relations at Al-Turath University and a researcher in political affairs, said in statements to Al-Ittihad that holding early elections is one of the ways to break the political deadlock in Iraq since 2003, noting that the reform of alliances after Last year’s election results are no longer possible, and therefore there is no other way than to dissolve parliament and go to new elections, which do not involve radical and other changes will entail the previous results.
Nouri stressed that the most notable results of the snap elections are “the deportation of the crisis”, leading to the easing of current tensions, as buying time can help reduce disparities and reduce media and field escalation , and early elections contribute to change the beliefs of some blocs after the repetition of “selective alliances”. opposition and the loyalists.”
She points out that one of the results of the early elections is the increasing international interest through the organs of the United Nations, as it will be present at a higher intensity from the start in anticipation of a new crisis.
Nouri said: “All national parties know that any dispute at the level of the current dispute will harm everyone”, with the expectation that elections will only be held after the formation of a government with full powers, to ensure electoral security and the necessary funding. to offer hold them.
In her statements to Al-Ittihad, she indicated that the changes to be made to the electoral law must be made in accordance with comprehensive political agreements, without proceeding with a single vision, as the attempt to “break the will” will lead to increased tension and political and popular tensions.
On the aspects that the new electoral law should include, Nouri said, it should “achieve electoral justice, guaranteeing and restoring Iraqis’ confidence in the electoral process as part of the political process” so that the majority of the vote does not go to waste, as happened in the last election, when the number of participants It exceeded 10 million out of 24 million eligible voters, but the majority of the vote was not represented in the House of Representatives, so it is important that all political blocs take this observation into account to achieve electoral justice.
She added: “The electoral process will be complicated, and here it is difficult for the candidate or political bloc to use illegal means to convince the voters, and the only way to convince the public is the general specifications and standards of the candidate and his political bloc, as well as his election manifesto and past achievements.”
Nouri called for the need to add a paragraph in the electoral law specifying the ceiling on election campaign spending, and for the Commission to monitor this spending.