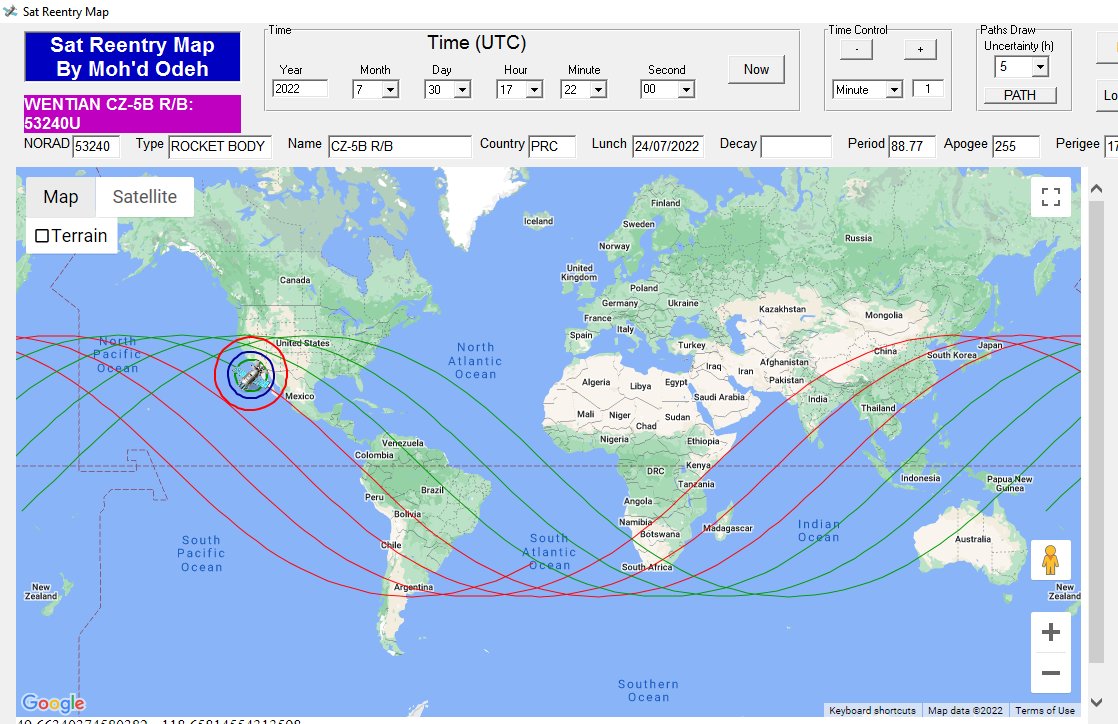 The International Astronomy Center has announced another update on the debris of a Chinese rocket expected to fall on Saturday, July 30.

In a statement on Twitter, the International Astronomy Center confirmed that all regions of the Arab world are outside the fall zone, but this may change in future updates. He explained that all areas under the red and green lines are likely to fall over it.

On July 24, 2022, China launched a CZ-5B space rocket named (Long March 5), with one of the key pieces named (Wentian) to dock at the Chinese space station (Tiangong).

The rocket consists of four large turbojet boosters and only one main stage. The main stage currently revolves around the Earth once every 89 minutes.

Because this piece orbits the Earth and is an artificial piece, it is now called a satellite and is a kind of space debris. Contrary to the overly common, the issue of satellites falling to Earth is a weekly topic, but what sets it apart this fall is that it’s a bigger chunk than the usual speed.

This wreck is 33 meters long, 5 meters in diameter, weighs about 21 tons and orbits the earth at an average speed of just over 28 thousand kilometers per hour.

What happens when satellites fall to Earth is the following:

At an altitude of 120 km, the satellite suffers from severe friction with the atmosphere, so the temperature rises and starts to disintegrate, and at an altitude of 78 km, the satellite explodes due to the intense pressure and heat and remains on fire to a height. from about 50-40 km, and during this journey from 120 km to 40 km, Into the sky look like a very bright and flaming body and consists of several luminous pieces. After that, the lighting disappears and the fall to the ground continues in a free fall, and it is not possible to look at it until it hits the ground, and usually, because of what has been mentioned before, it only reaches 10% to 40% of the mass of the original satellite, but because of the size of this large debris, what remains of it, it may pose a danger to the place it will fall solely on, and since water makes up 71% of the land area, the percentage of his fall into the sea is also 71%.

The International Astronomy Center added in its statement that no party in the world can know the place and date when this debris will inevitably fall, as this forecasting process is marred by many factors of inaccuracy for various reasons, including knowing the shape in which the debris will enter the atmosphere, and knowing the density of the debris. The upper atmosphere accurately at the time of entry, because it changes with the change of solar activity. Nevertheless, there are provisional expectations, which refer to the margin of error. One of the best-known agencies to issue their predictions is the United States Department of Defense’s monitoring unit, which includes the International Astronomy Center’s satellite tracking program.