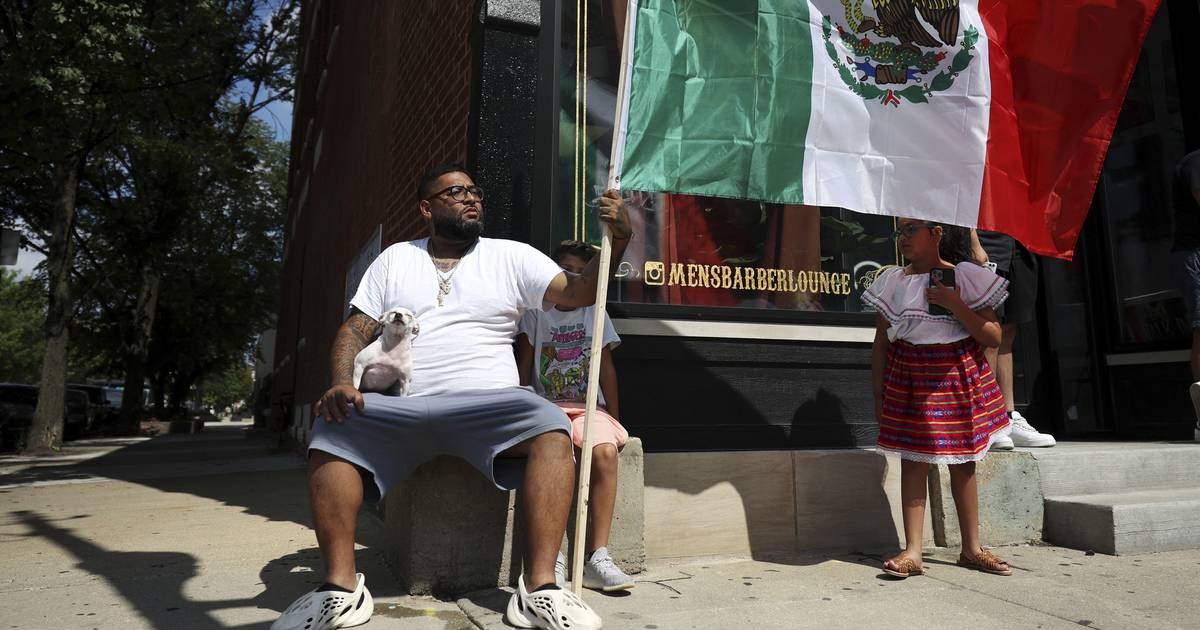 Santiago and Vanessa Alvarez brought their two boys, Mikel, 10, and Matteo, 12, to Pilsen on Saturday afternoon to let them experience their local Mexican heritage for the first time as they paraded through the neighborhood.

Santiago said it was important for him to have his sons come to Pilsen to celebrate because “they should know Pilsen before it gets upgraded.”

The 20th annual Pilsen Mexican Independence Day Parade returned to the district on Saturday prior to the actual public holiday Friday.

Local groups such as Pilsen Athletic League, Chicago Police Women’s Soccer, Francisco I. Madero Middle School marching band and more walked, danced, and sang their way down West 18th Street for some 10 blocks as hundreds waited on the sidewalk to take it all in. to include.

Children waited with their parents, some in the shade and others right under the high midday sun, to grab sweets distributed from floats and cars. “Viva México” and “Viva Pilsen” were widely acclaimed from the parade participants and the crowd.

Last but not least, the parade line ended with La Michoacana ice cream trucks. A parade goer at the end yelled, “This is the best part here!”

When the festivities ended around 1pm, people slowly started packing the blankets and chairs they had brought with them to sit on and got on with their weekend. The city’s streets and sanitary trucks were also close behind them to sweep up West 18th Street.

For the Alvarez guys, Mikel said his favorite part was the groups going through on horses, while Matteo said “it was all so good.”

Santiago said he attended the Pilsen parade “a long time ago” but that it was the first time for his children. The parade has been canceled for the past two years due to the COVID-19 pandemic, so he said this year was finally a good time for them to come, but he said there was still some concern about “how crazy things can get.” “.

“They are a bit older now and have had a little more social training, so if something bad happened they would be better prepared for it,” he said. “But it was a great parade, and we are very happy with it.”

Santiago said he was born in Mexico, while Vanessa was born and raised in Chicago. The family lives in Humboldt Park. Santiago said they were going on vacation to Mexico this summer to give the boys a chance to “see some of their culture.”

The best stories from the Chicago Tribune editors, delivered to your inbox every afternoon.

Vanessa said that coming to Pilsen is special to her, also because she visited Pilsen on the weekends to see family.

“It’s a lot of fun to bring back those memories and have the kids come here and go full circle,” she said.

Santiago said he hopes the community will keep these traditions alive and “fight back” against attempts to gentrify the neighborhood.

ald. Byron Sigcho-Lopez, 25th, met parade participants and spectators at the end of the route as he waved a Mexican flag. Although he is Ecuadorian himself, Sigcho-Lopez said the tradition of celebrating the Mexican community in Pilsen is important to him, especially after a two-year absence.

“I feel like the Mexican community here has always been generous, always nice and welcoming,” he said. “To see our community continue to be this welcoming gateway for so many people, such as the migrants and refugees who have come here recently, I think it’s so important to celebrate this tradition.”

He said he hears the fear of some people in the community, especially in light of the pandemic where many have been through hard times and have been displaced, but he said he would come back this year with a “safe” parade that will bring so much. brought people out was a part of the neighborhood that was working to overcome any problems.

“It’s great to see the community come back and resilient enough to celebrate and also to come back and fight back so people know we’re still here, and we’ll keep fighting to stay here,” he said.